Kazakhstan protesters demand split from Russia and support for Ukraine 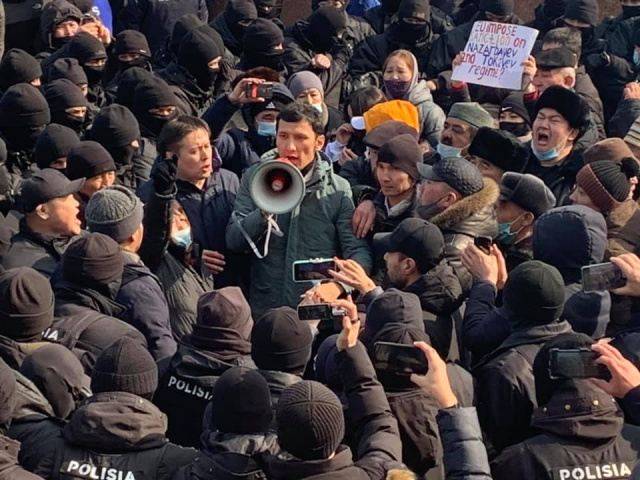 The demands of protesters in Kazakhstan have been posted on the Internet. They include the resignation of the president, government and parliament, secession from the CIS, the EAEU and other alliances with Russia, as well as condemnation of the military aggression against Ukraine and the annexation of Crimea.

The list of demands was posted by KushТаu on-line Telegram channel.

Among the demands are the immediate release of all political prisoners, the creation of an interim government composed of “participants in the resistance in Kazakhstan” and the holding of “free elections.”

“The main condition for political reforms is a strict adherence to the values ​​of democracy and respect for human rights, recognition of the years of Soviet rule as a crime against the peoples of the post-Soviet empire, condemnation of military aggression against Ukraine and the annexation of Crimea, secession from the CIS, the EAEU and other alliances with the Russian Federation.”

The list of protesters’ demands to the authorities is constantly expanding.

Protesters also urge the authorities to suspend the immunity of parliamentarians and reduce their funding from the budget, to reduce prices for food, clothing and utilities, lower the retirement age, and grant independence to Mangystau region.

About protests in Kazakhstan:

Protests have been held in Kazakhstan since January 2. Protests were triggered by rising LPG prices. Citizens demand the resignation of the president, the government and oppose corruption.

President Kassym-Jomart Tokayev responded to the protests by dismissing his cabinet. He decided to transfer the interim duties of prime minister to Alikhan Smailov.

The President of Kazakhstan appealed to the heads of member states of the Collective Security Treaty Organization (CSTO) for help. The RF, Armenia, Belarus and Tajikistan sent forces to Kazakhstan  for a limited time to “stabilize and normalize the situation.”

On January 6, the Collective Security Treaty Organization (CSTO) sent a contingent of troops to Kazakhstan. The forward units of the Russian troops have already begun their missions in this country.

During the rallies, law enforcement officers use force against the protesters; hundreds of people have been detained.

During mass protests and clashes with security forces in Kazakhstan, Internet connection has been blocked, and mobile communication is intermittent. It should be noted that the mobile Internet in the country has not been working for a long time. Because of this, Kazakhstan’s sites, including those of state media, are inaccessible.

The capital of Kazakhstan was cordoned off with checkpoints: entry and exit from the city was restricted.