Home » “Torture by reconciliation.” Emigrants from Ukraine and Russia carried together the Holy Cross in Vatican

“Torture by reconciliation.” Emigrants from Ukraine and Russia carried together the Holy Cross in Vatican 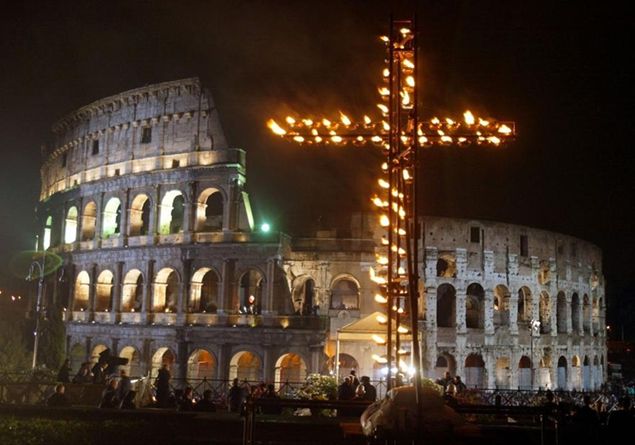 Emigrants from Ukraine and Russia carried together the Holy Cross in the presence of the Pope Francis in Vatican. Ukraine urged to refuse from this “gesture of reconciliation”.

On the evening of April 15 in Rome, two women, one Ukrainian and one Russian, Iryna and Albina, who have been living in Italy for more than 20 years, carried together the processional cross during the traditional Way of the Cross in the presence of Pope Francis.

The broadcast of the procession, which took place near the Colosseum, was conducted by Vatican News.

The text of the speech that was delivered during this stage was changed and “reduced to a minimum”, Deutsche Welle reports, citing Matteo Bruni, Vatican Press Office Director. The faithful were called to “pray for peace in the world”, then there was a moment of silence.

After the script for the procession was made public, Ukraine objected to the idea of “reconciliation” between Ukraine and Russia. Ukrainian Ambassador to the Vatican Andriy Yurash and head of the Ukrainian Greek Catholic Church Svyatoslav addressed the Vatican.

“Archbishop Sviatoslav Shevchuk, the head of the Ukrainian Greek Catholic Church, said that it equated victims to their aggressors. Shevchuk and the Ukrainian government appealed to the Vatican to change its plans.“

“I had the opportunity to personally convey what the pain of Ukrainians is, our sensitivity and rejection of this type of premature acts. It was very important to explain how we understand today in Ukraine the very idea, the very possibility of reconciliation between Russians and Ukrainians. Our position is the following. At present during the active phase of this unjust war, in particular, when we are all expecting another offensive by Russian troops on Ukraine, such gestures are basically impossible. After all, to make peace with someone, you need to be at least alive…”, explained Svyatoslav, the head of the Ukrainian Greek Catholic Church.

The Vatican did not respond to the protests. According to Polskie Radio, the Jesuit priest Antonio Spadaro, who is close to Francis, said that the Pope “is not a politician”, explaining why the service was decided to be held according to the plan.

After the procession, Yurash wrote on Facebook that the Vatican was attentive to the protest of Ukraine.

“Instead of the planned text, which was supposed to include the thesis about the “fraternal peoples”, it was proposed to pray in silence… It was useless to hope that the text and the content of the Way of the Cross, already published in all official sources, would be completely changed. However, doing nothing was also impossible.

And now we have a specific result, about which the first media are already writing,” he said. He also published a screenshot of an article on the Catholic socio-religious website Credo, where the headline says that “the Vatican has heard Ukraine,” and also Reuters article about the fact that the speech was cut from 200 words to two short sentences.