NATO supports Ukraine and calls Russia to de-escalate the situation 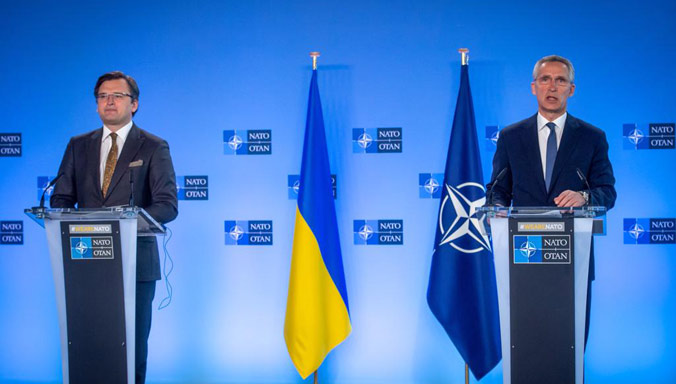 Special Ukraine-NATO partnership enshrined in article 15 of the Charter allows Ukraine to initiate The NATO-Ukraine Commission.

The NATO-Ukraine Commission met at NATO Headquarters in Brussels on Tuesday to address the deteriorating security situation in and around Ukraine. Ukrainian Foreign Minister Dmytro Kuleba informed Allies of the latest situation development in the region.

The meeting was chaired by NATO Secretary-General Jens Stoltenberg.

J.Stoltenberg delivered strong messages to Russia: he called Russia to stop military build-up and provocations and de-escalate the situation in the region. He stressed the importance for Russia to follow Minsk agreements and stop supporting the militants in Donbas and withdraw its forces from Ukraine territory in the eastern region. J.Stoltenberg stressed the importance of Russia’s constructive involvement at the OSCE on its mission in the region.

A clear message was delivered by J.Stoltenberg on the NATO Allies’ position concerning Crimea: NATO Allies do not and will not accept Russia’s illegal and illegitimate annexation of the peninsula.

He stressed that NATO will continue to provide support to Ukraine: “We have supported wide-ranging reforms that are making Ukraine more resilient and help advance its Euro-Atlantic aspirations,” the Secretary-General said. “We will further enhance our cooperation with Ukraine and Georgia on Black Sea security, and we are working to make full use of Ukraine’s status as an Enhanced Opportunity Partner,” he added.

Also, J.Stoltenberg touched upon Ukraine’s NATO membership: “It depends on Ukraine when it decides if it is ready to join. No one can create barriers or  intervene in the process.”

Ministry of foreign affairs D.Kuleba also had a meeting in  Brussels with  US Secretary Blinken. Kuleba wrote on Twitter: “Good meeting in Brussels with colleague and friend Blinken around Russia’s military build-up and belligerent rhetoric”. He warned Russia from further de-escalation and stressed that “the price for any new military actions will be very high”

In Brussels, Secretary Blinken reaffirmed the U.S. commitment to the Transatlantic alliance as a critical partnership for achieving mutual goals.