Russian mass-media: No news? Stage it! 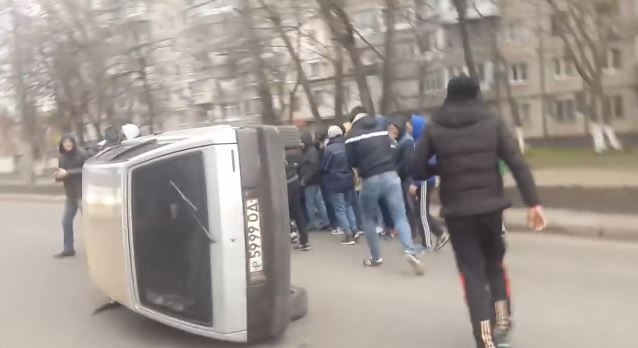 March 21, a rally against repressions was staged in Odessa and presented by Russian mass media as an evidence of Odessa residents dissatisfied with Kyiv authorities.

Kremlin has already protected Russian speaking population in Donbas. Now Putin would love to continue his salvation mission in southern part of Ukraine, still in need of land corridor to occupied Crimea. But, unfortunately, despite a range of explosions which are very likely to be organized by Russian subversive groups, people prefer to leave in peace in Odessa, where Russian and Ukrainian speaking residents have no problems in communicating with each other, and no fascists eat Russian infants. But it’s not a big deal for the talented Russian mass media, since they can manage on their own: No news? Stage it!

That’s how it happened that Odessa residents were surprised to learn on a calm spring Saturday day of 21 March that some strange confrontation took place: a group of people on a rally against repressions turned over a car on one of Odesa streets.

It didn’t take long for the news to spread around the city raising discussions on when, where and how such extraordinary thing could happen. There were two disturbing things that could be noticed at once, while watching the video of the incident: firstly, the video was shot in some distant area of the city (if that was Odessa at all), secondly, it was shot either early in the morning or on some other day, because contrary to cloudy day shown in the video, that day was warm and sunny in Odessa.

The police reported there were no mass rallies in Odessa that day. Later it was found out the video had been shot in Ilf and Petrov Str., located in a dormitory suburb of the city. People living in houses nearby reported it had been around 7:30 in the morning. That actually explained the cloudy weather in the video – the sun just hadn’t risen by that time. Locals told the whole ‘rally’ had taken around 20 minutes: people left as soon as the video was shot. So, what have we got? A group of people gathered on outskirts of the city early in the morning on Saturday to rally against repressions, turned over some car and left soon. Sounds strange, isn’t it?

One may ask, what Russian media have to do with all of this? The thing is that Russian central propagandist channel Russia 24 showed (and then all other Russian media took up the “news”) the video saying there was a rally in the centre of Odessa, during which people blocked the road to protest against political repressions, restriction of free speech and prohibition of meetings; during the rally a car with the Right Sector symbol tried to crash into protests, who turned it over. Those were really very lucky “protestants” to find any car at 7:30 in the morning on a day-off in a bedroom suburb at all, not to mention that of the Right Sector. By the way, “the Right Sector” symbol is never shown in the video. “I don’t’ believe” would have been the verdict of great Russian director Konstantin Stanislavski.

It should be also noted that Odessa volunteer organisation “Oberih” conducted its small investigation and identified that the same people had been spotted earlier that week on 19 March to participate in another paid meeting in the center of Odessa. C’mon, Russian mass-media, you can do really better.