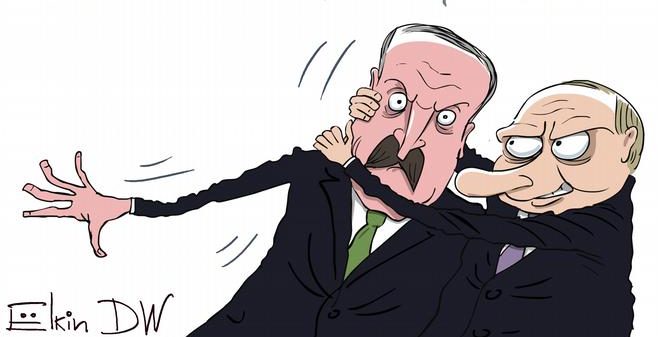 Among recent events that can lead to radical changes of the foreign policy situation for Ukraine, one can be singled out as the main. It is a new, or rather, well-forgotten old political entity on the map – the so-called “Union of Belarus and Russia”, an agreement on the establishment of which was signed by Belarusian dictator Lukashenko and Boris Yeltsin in 1999.

If we briefly analyze everything that happened in the context of Belarusian-Russian relations, the most interesting developments began after 2014. That is, after Russia Federation annexed the Ukrainian Crimea, taking advantage of the revolutionary changes in Ukraine, when Russia began rocket and artillery attacks at the Ukrainian army in Donbas from its territory, preparing an invasion.

The Belarusian people’s attempts to oppose the self-proclaimed dictator were brutally suppressed, but the “eternal president” understood very well that he would not have a second chance to hold the situation. That is why he actually ceded his country to Russian President Putin.

Statements made by the head of the “so far” Belarusian state are also important for Ukraine. For example, that the armed forces of Russia and Belarus will become a single army within 3-5 years, or about the deployment of S-400 missile systems promised by Russia on Belarusian territory, which will allow them to control the airspace over Ukraine due to their tactical and technical characteristics, or a statement about increasing the number of “manpower” …

Russian Deputy Prime Minister Alexei Overchuk tried to deny the takeover, considering it “integration”, but he lied here as well. While stating that “all Russia-friendly countries in the post-Soviet space have retained their statehood and sovereignty” 30 years after the collapse of the Soviet Union, Overchuk “forgot” to mention Russian aggression in both Ukraine and Georgia.

The Zapad-2021 strategic military exercise close to the Ukrainian borders is meant to demonstrate to the Western world the readiness and combat effectiveness of the armed forces, primarily the Russian ones.

The published map of the exercise also shows clearly who exactly the combined army of Russia and Belarus considers a “conditional adversary.” Given that no smaller-scale training with the Arctic grouping and Northern Fleet troops began almost at the same time, we can say that Russia is trying to intimidate not only Ukraine but also Poland and the Baltic states, or maybe even more…

Ukrainian President Volodymyr Zelensky stated for a reason that there is a high probability of a full-scale war between Russia and Ukraine today, emphasizing that such a development would be Moscow’s “biggest mistake.”

Given the scale and simultaneity of ongoing Russian exercises in the north and west, the complexity and costliness of training, the lack of coordination between the Belarusian and Russian components, we can say that the threat of direct Russian invasion of mainland Ukraine is unlikely today.

But it has not faded away.

In the event of aggression, Russia can and will use Belarus as an additional advantageous base area, and the Belarusians as expendable material to satisfy their imperial ambitions. It always does so.

It’s only a matter of time.