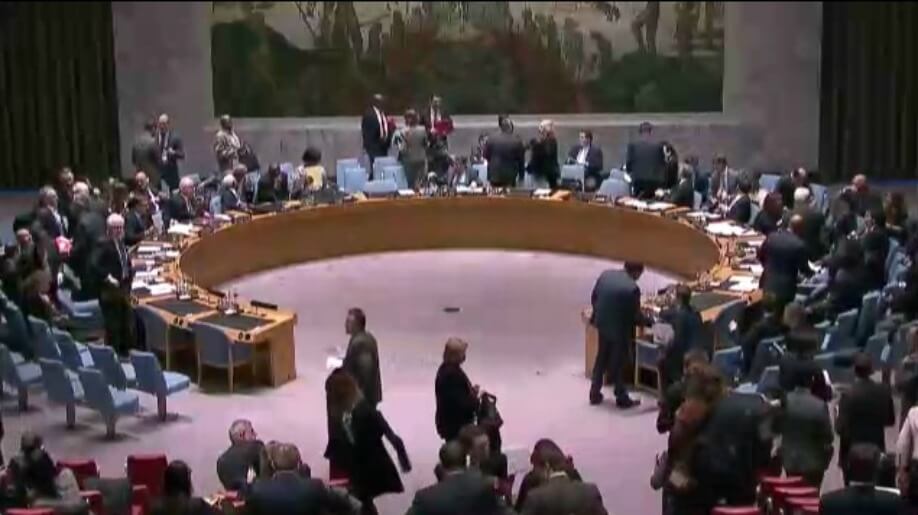 UNSC meeting on Ukraine issue based on the letter dated 28 February 2014 from the Permanent Representative of Ukraine to the United Nations addressed to the President of the Security Council (S/2014/136) was held today. EMPR‘s main findings are as follows.

– UNSC is meeting amid the worst hostilities in eastern Ukraine since Minsk agreements signed;

– 850K is the number for the IDPs inside Ukraine and 600K in neighbouring states. Unilateral changes to accords, selective implementation of the document’s positions is unacceptable.

– rejects any calls to re-negotiation the terms for ceasefire, Russia’s attempts to change Minsk according to its benefit is unacceptable.

– Russia’s behaviour is dangerous not only for Ukraine, but for the international peace and security;

– situation is dangerous as Russia is contributing to the humanitarian crisis in eastern Ukraine;

– president Vladimir Putin proposed President Poroshenko a new peace plan, but the World already has seen that in Ossetia & Abkhazia.

Both the Lithuania and the U.S. Representatives to the UN mention Nadiya Savchenko (#FreeSavchenko) in the context of her illegal detention by Russia. – EU is one of most active partners in provision of humanitarian aid to Ukraine’s conflict-affect areas and will remain so;

– 40% of humanitarian aid prepared by Spain to Ukraine will go to the conflict zone citizens.

– calls for peaceful solutions and for Minsk agreement fulfillment;

– UN discussed Ukraine issue more than 30 times in 2014 and hopes in 2015 diplomatic solution will be found;

– it’s time to think about more autonomy for eastern regions of Ukraine, which could help to suspend current escalation in the region.

– there are numerous reports of Russian personnel and equipment crossing the Ukrainian border despite Russia denying it;

– Russian T-72 BM tanks spotted near Luhansk. Ukrainian army is not in possession of such equipment;

– hundreds of Russian troops and thousands of so-called “volunteers” remain on Ukrainian territory, must be withdrawn;

– more than 1K km of the Ukraine-Russia border is open which is used by Russia to supply militants with weaponry and armed forces;

– Russia violates stability not in Ukraine only. Abkhazia & Osetia are the great examples how Russia invades its neighbors.

– deeply concerned about the current situation in eastern Ukraine & calls for political solutions.

– is also deeply concerned, and…calls not to impose sanctions (read: against Russia) to solve the issue;

– Last events in eastern Ukraine is a serious threat to stability and could not be solved by force, only by diplomacy;

– shocked that so many info exists on passing the border from Russian side to eastern Ukraine, which means Russia supports this conflict.

– is deeply concerned with tense humanitarian situation for civilians in the conflict zone in eastern Ukraine.

– reminds that Russia started escalation and further invasion a year ago from Crimea annexation;

– open question to Russia Representative to the UN: more than 8K Russian battalions from the russian cities of Pskov, Ulyanovsk, Maykopa, Stavropolya, Volgograd, Kaliningrad, Tula etc already in eastern Ukraine. What are they doing there?

– refused to repeat the needs of Minsk agreement, because it is ‘just paper‘ for Russia side;