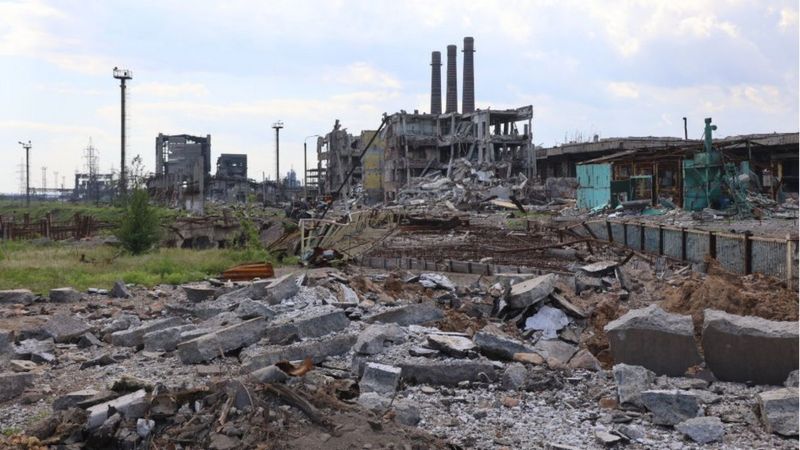 The port city of Mariupol is now under Moscow’s control. Russia claims that it will hand over the bodies of 152 Ukrainian soldiers found underneath the Azovstal to representatives in Ukraine.

The European Council denounced Russia’s war against Ukraine and the EU leaders agreed to impose new sanctions. It provides a partial embargo on oil. Ukrainian President Volodymyr Zelensky joined to the special meeting too. The EU will continue to provide support to Ukraine and they are prepared to play a major role in Ukraine’s reconstruction.

A refugee from Ukraine, Alina Koreniuk, recognised the items that Russian invaders stole from her house. She and her kids left Popasna in April under the UK government’s Homes for Ukraine. Alina saw a new boiler, an oil cloth table cloth and Disney bed sheets on the tank in a photo. They expected houses in their town to be looted, so they weren’t surprised by what had happened.

Mariupol was taken under full control by Russia earlier in May, when Ukrainian defenders surrendered at Azovstal. A ship with 2.700 tons of stolen Ukrainian metal left the port of the Mariupol and is headed to Rostov-on-Don, Russia. The Ukrainian authorities equate this with looting.

Russian soldiers Alexander Bobikin and Alexander Ivanov sentenced to over 11 years in jail for the shelling of civilian buildings. Judge said that their guilt has been proven in full.

This sentencing is the second verdict handed down in war crimes trials held by Ukraine since the beginning of the war. And many more such lawsuits are expected.

Representatives of a group of nations are meeting in The Hague today. They are working to investigate war crimes in Ukraine.

Russian occupiers have been accused of rape of girls, killing civilians and destroying infrastructure. The President of Ukraine and the US President consider Putin a war criminal.

Vladimir Zelenskyy announced his desire to meet with the President of the Russian Federation in a telephone conversation with Turkish Foreign Minister Mevlut Cavusoglu. Ukraine and Russia have already held several rounds of peace negotiations, but they have not produced the desired results. Turkey is doing their best to keep the discussions between Ukraine and Russia going.

The Guardian: Africa warns of food crisis due to Russian blockade of Ukraine’s ports:

Moscow’s blockade of Ukraine’s ports risks “a catastrophic scenario” of food. Senegal’s president, Macky Sall, said that African countries imported 44% of their wheat from Ukraine and Russia before the invasion. It is urgent to ensure the transportation of grain, as people are now on the verge of starvation.

Lee Zion decided he needed to go to Ukraine to fight against Russian troops. He is giving away the weekly newspaper he owns. The owner wants to leave the paper in good hands, so the next owner must show that he has the knowledge and the desire to take on the challenge.

The Sun: Putin could sacrifice his OWN army in bid for hollow victory in Ukraine to save his skin despite 30k losses:

Russian President believes that so many dead soldiers are a “price worth paying” for a partial victory. Russian army lost a lot of military equipment and now is on the verge of collapse. But he still believes that his country can succeed in the war.