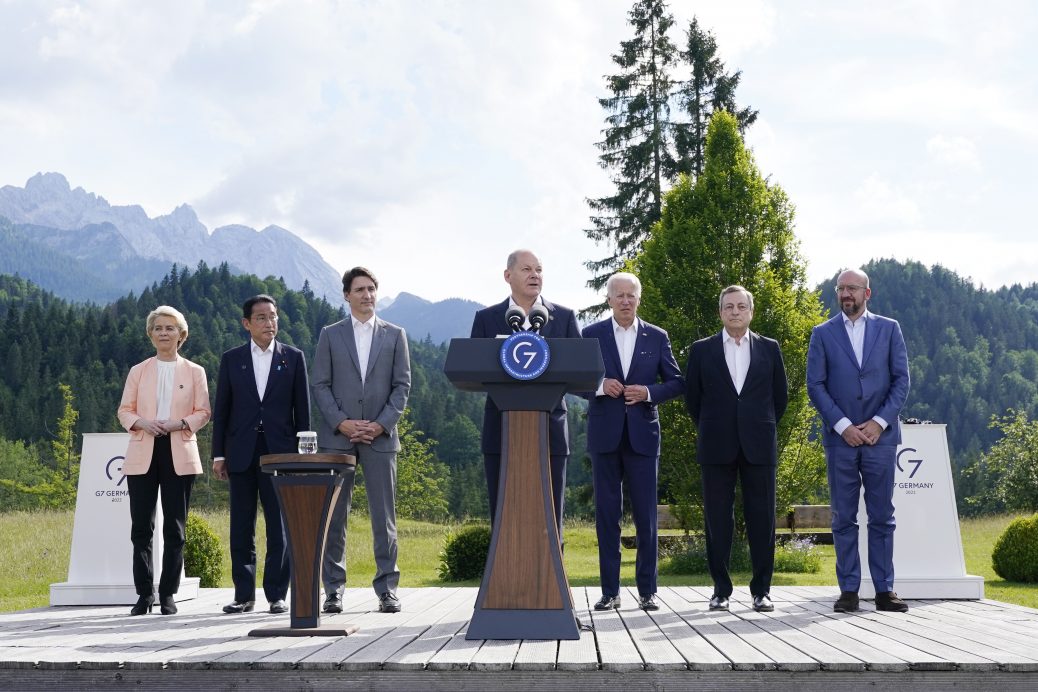 Russia shelled Kyiv early Sunday morning. The missiles were launched over the Caspian Sea. Explosions ripped through an apartment building and a playground near a kindergarten. One person was killed and several were wounded.

The badly wounded woman appeared to have a Russian passport, proof that the Russian president was also wounding Russian citizens.

The New York Times: The U.S. and Britain will ban imports of gold from Russia

The G7 countries will ban gold imports from Russia to eliminate the country’s main source of revenue, President Biden said at a meeting in the Bavarian Alps. Russia is one of the world’s largest gold producers, and most of those exports go to G7 countries.

The decision will be formally announced on Tuesday. It will help isolate Russia from the international financial system.

Boris Johnson says Ukraine’s president has done an unbelievable job during war with Russia. The prime minister said he had a desire to arrange for the president of Ukraine to visit Britain. This includes meetings with Queen Elizabeth II.

The Conservative Party also wants Zelenskyy to talk to them via video link at a conference in October.

The head coach of Dynamo Kyiv Mircea Lucescu believes that the new season of the Ukrainian Football Championship should be held in Ukraine. The coach shared the importance of Dynamo charity matches in Europe, which allow collecting money and sending them via associations to Ukraine.

The G7 leaders have arrived in Germany for a meeting where they will be hard pressed to do more for Ukraine in the war. They will also discuss the important issue of the blockade of Ukrainian ports. The aftermath of the Russian attack on Ukraine has affected the entire world economy, causing food and fuel prices and inflation to rise.

During the G7 meeting, rockets from Russian soldiers flew at Kyiv.

Indonesia’s president wants to call on the Russian president to order an immediate cease-fire. And also to open up space for dialogue during a peace-building mission in warring countries. Indonesia’s foreign minister believes a grain corridor from Ukraine should be secured and food and fertilizer exports from Russia should be opened.

In recent days, the number of shelling in Kharkiv has increased.

A house in Kharkiv was destroyed by a rocket fired from Russian territory on Saturday.  A medical facility was hit on Saturday night. The police chief believes that Russia is trying to bore Ukrainians by hitting non-military buildings.