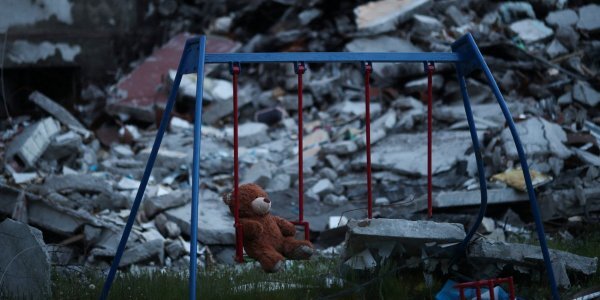 The UK has expressed its disapproval of Russia’s abduction of Ukrainian children to Russia, sending new sanctions against the people involved in it.

Maria Lvova-Belova, Russian children’s rights commissioner, was subjected to the UK sanctions. Ukraine accused her of organizing the kidnapping of more than 2,000 vulnerable children forcibly removed from Luhansk and Donetsk regions.

Kaja Kallas believes that Ukraine’s allies need to accelerate their military assistance and that it is important for Europe and the U.S. to remain focused on helping Ukraine win, despite the waning public attention to the war.

She is concerned that we are hearing calls for peace talks, which means Ukraine should give up some of its territory.

The leaders of France, Germany and Italy arrived in Kyiv early Thursday morning.

They are preparing for talks with Ukrainian President Vladimir Zelensky.

Later Thursday, the group visited the Kyiv suburb of Irpen.

The trip came a day before the EU executive committee is expected to recommend advancing Ukraine’s application to join the bloc, which EU leaders are expected to approve at a summit in Brussels next week.

Top News: They hit with fragmentation shells: After yesterday’s shelling of Kostiantynivka, three civilians were injured and one died

Due to yesterday’s Russian shelling of Kostiantynivka, one person was killed and three were wounded. The Russians probably hit with shrapnel shells. A private sector was also affected.

Many Ukrainians affected by the war were relocated to a sleeper train provided by the Ukrainian railway company.

It consists of five cars, which can accommodate up to 25 families.

Each wagon has everything you need, from air conditioning to Wi-Fi.

NATO is preparing ways to defend and strengthen its member states more quickly against Russian aggression.

Russia tried to infiltrate the International Criminal Court in The Hague with a spy posing as a Brazilian trainee. The AIVD said it denied entry to a GRU Russian military intelligence officer in April as a “threat to national security.” If successful, the man could have recruited Russian intelligence sources, gathered potentially compromising information, and even influenced ICC criminal proceedings.