Home » Karpiuk about how Russian jailers tortured him and Klykh

Karpiuk about how Russian jailers tortured him and Klykh 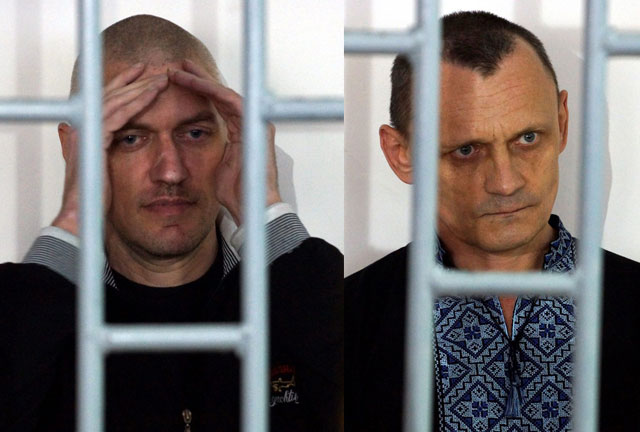 Mykola Karpiuk, released from the Russian prison, said that Russians subjected him and another political prisoner, Stanislav Klykh to electric shock, deprived them of sleep, gave psychotropic drugs and could implant a microchip.

TCC-1 (Temporary Containment Cell). As soon as it gets dark, they take you out to the corridor – handcuffs, hands behind your back, cellophane wrapping on your head, fixed with Scotch tape, some cotton wool so that can’t see anything – and take you out. We walk for about 10-15 minutes, enter a room, go up to the 4th floor.

A clamp to the right toe, a clamp to the right finger, or to other parts of the body – and electric current begins to flow through the body. With different periods: by jerks, for a certain time – it is quite an unpleasant feeling. This is what they did to me.

Then you are taken to TCC-1- an interrogation room, a meter byr meter metal cell … And deprive you from sleep for a night, for 24 hours. As soon as I start to close my eyes – cops change every 2 hours and immediately “Don’t sleep, don’t sleep.” They do not let you sleep. “

Karpiuk added: “But I can say that I lucked out as they treated me a bit differently. And what happened to Stanislav Klykh – he was brought then, he was not put in a cage, he was taken to a cell and tied –handcuffs behind his back and to a bunk bed: made him stand on his knees and did not let him sleep or move all night.

There is no sound insulation there – so I could often hear how people were taken out. And this gnashing Scotch tape in the corridor, when people were brought in from tortures and put in a cell. He moans all the time and asks, “I’ll sign you all, but let me sleep.”

It so happened that I was tortured four nights, and on the fifth night there was no torture, but that night due to the fact that I was not allowed to sleep, I just lost consciousness there – went into a state of delirium and was up in a cell. On the sixth day I was transferred to a cell.”

Karpiuk said that in addition to tortures, the Russian jailers “apply psychotropic drugs” – and they also applied them to him: “Once I “tripped out” for 24 hours. I have no idea what happened to me.”

He also suspects that the Russian jailers could implant microchips in political prisoners. “When Stanislav Klykh was still conscious, in a normal psychological state, when we met on September 15, 2016 at the first trial in Grozny, he showed me a square cut on his wrist and said he had a chip implanted there.

I took it extremely seriously, because when I came out of deliriousness, I was sure that that they had implanted a chip in my body. I examined my whole body and then thought I might be hallucinating or something. But when Stanislav told me that he had a chip implanted, I remembered the conversation of cops about it. That is why I was looking for the chip all week. “

Karpiuk explained that when a chip is implanted, it acts on the nervous system and “a person feels a panic-driven fear.”

It should be reminded that a major 35 to 35 prisoner exchange between Ukraine and Russia took place on September 7. The doctors of the Feofaniya Clinic examined the sailors and political prisoners and put Klykh into the intensive care unit.

In the fall of 2016, Russian human rights activist Zoya Svetova reported that Ukrainian Stanislav Klykh had gone mad because of tortures in a Russian detention center. In the summer of 2018, Klykh was in a psychiatric prison hospital in Magnitogorsk.