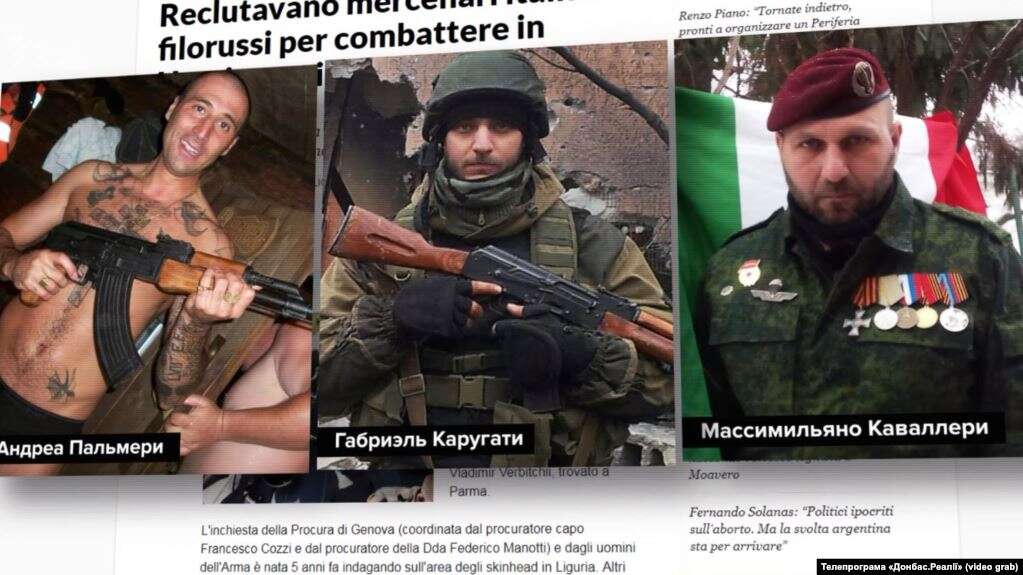 Italian law enforcement uncovered an organization that was recruiting mercenaries to fight in Donbas alongside Russia-backed militants.

Several people were arrested in Italy, a few more arrest warrants were issued. Some of the suspects stay in the uncontrolled part of Donbas. Ukrainian project “Donbas.Realii” by Radio Liberty digs into the case.

According to the investigation in Italy potential mercenaries were searched for and later sent to Donbas under the cover of humanitarian operations. Among the suspects is Orazio Gnerre – Italian activist, Russia sympathizer, founder of the organization “Solidarity coordination for Donbass” (Coordinamento solidale per il Donbass). It was founded in 2014, the same year Gnerre and his comrade Luca Pintaudi came to Donetsk where he met with then-leaders of the “DPR” Pavel Gubarev and Denis Pushylin.

Gnerre and Pintaudi are under investigation but were not arrested. Three other suspects are in custody. According to the Italian newspaper “La Repubblica”, arrested are Antonio Cataldo, Olsi Krutani (native of Albania) and Vladimir Verbitchii (native of Moldova).

Carabinieri (a police unit in Italy, part of the Armed Forces having both police and military powers – Radio Liberty) found that foreign mercenaries were paid 300-400 euro per month.

Radio Liberty’s project “Donbas.Realii” (Realities of Donbas) turned to Luciano Trapanese, director of the local Italian newspaper “OttoPagine”, for a comment. “Combating alongside pro-Russian fighters at war in Ukraine is little-paid, mercenaries in other armed conflicts can earn much more. So these citizens are mostly motivated by their ideological convictions,” Trapanese explained.

Carabinieri released a video of the special operation they held, the video features one of the arrested – Volodimir Verbitchii who took the call sign “Parma” in Donbas. He went to fight there in May 2015 and joined the “Rusich” armed group.

After the first two months in Donbas he stopped hiding his face. He is featured in a YouTube video in which militants train him to direct artillery fire. “Parma” speaks on camera saying he is 21, despite the fact that he grew up in Italy where his parents moved to from Moldova, he considers himself “Russian”.

The second suspect – Olsi Krutani is a Chechnya war veteran, he owns a gym in Milan and is an ardent fan of Russian martial arts. According to the newspaper “OttoPagine”, Donbas mercenaries were recruited during the sports events of a kind.

The third arrested – Antonio Cataldo used to serve as intermediary between potential mercenaries and the actual combatants in Donbas.

“Antonio Cataldo is the key actor in the investigation held by law enforcement of Genoa on the mercenaries who fought alongside Russia-backed forces in Ukraine. He is considered to be an experienced mercenary, he fought in Libya, was held captive by Gaddafi’s militants, he underwent military training in Panama. He became recognizable after a well-known Italian TV show broadcast an interview with him. He spoke about his experience as a mercenary in Donbas. Since then he became an example for those in Italy who wanted to go and fight in Ukrainian regions alongside Putin’s troops,” Luciano Trapanese said.

Arrest warrants were issued in Italy for three more militants: Andrea Palmeri, Gabriele Carugati and Massimiliano Cavalleri. The latter took the call sign “Spartak”, he was regularly featured in the news produced and broadcast on local TV in the occupied territory, was photographed with the then “DPR” leader Aleksandr Zakharchenko and said he had received the so-called “DPR passport” last February.

Cavalleri is not the only suspect who is currently in Donbas.

“Hello! My name is Andrea Palmeri, I now live in Luhansk,” the mercenary introduced himself on a video in one of the YouTube militant accounts.

Palmeri is an ultra from Italian region Toscana. In February 2014 he was convicted of assault in his home country, while on house arrest he ran away to fight to the “LPR”. According to investigation Palmeri served as intermediary for future mercenaries in the uncontrolled part of Donbas.

After the arrests in Italy, Palmeri posted on Facebook a photo of himself in the occupied Donbas. He wrote: “I am a terrorist and I recognize it.”

The third Italian on the wanted list, Gabriele Carugati responded to “Donbas.Realii” when journalists contacted him. After he started fighting in Donbas he was coming back to Italy. “I went home to have some rest. I now live in Donetsk,” the militant said.

Gabriele Carugati is a son of a former manager at the “Lega Nord” (Northern League) Italian right-wing party. Its leader, Matteo Salvini was Deputy Prime Minister and Interior Minister in the previous government. Earlier he called legal the annexation of Crimea.

“The party signed a cooperation agreement, a memorandum with Russia’s ruling party ‘Yedinaya Rossiya’ (United Russia). Already at that point Salvini used to say that sanctions need to be lifted from Russia,” commented Taras Semeniuk, expert in foreign policy, analyst at “KyivStratPro” agency.

So far investigation has not found a direct connection between high-level Italian politicians and mercenaries. Mauro Voerzio, coordinator of the Italian page of “StopFake” project, commented that the situation is the case when skinheads and communists equally headed to fight in Donbas.

“The arrested people support far-right parties (neo-Nazis) but we also know that Italians of left-wing views were fighting in Donbas. They united because they are both against NATO, the US and are Russia’s allies,” Voerzio said.

“Lombardia-Russia” (Lombardy-Russia) presents itself as a Russian-Italian non-government cultural organization set to intensify cooperation between the countries. (The organization is chaired by notorious Gianluca Savoini. Earlier this year a scandal broke when Savoini, a close aide to Italy’s then Deputy Prime Minister Matteo Salvini, held covert talks to pump Russian oil money to his far-right party – EMPR) On the web site of the organization there is a news piece reporting a visit of a group of Italian businessmen from Veneto region to Ukraine’s uncontrolled areas in Donetsk and Luhansk region.

“’Lombardia-Russia’ is an NGO that was actually setting up communication with Russia. (…) The organization could have possibly served as a bridge between the center that was training the militants and terrorists in Donbas,” analyst Taras Semeniuk said.

“This new case has opened the eyes to everyone, everyone knows that such actions are a crime. Those who might have thought themselves eager to go to the frontline in Donbas will now think twice,” journalist Luciano Trapanese concludes.

Information on the mercenaries was sent to Italian law enforcement by the Ukrainian Embassy in Italy. Local media mention 30 Italian citizens fighting in Donbas.