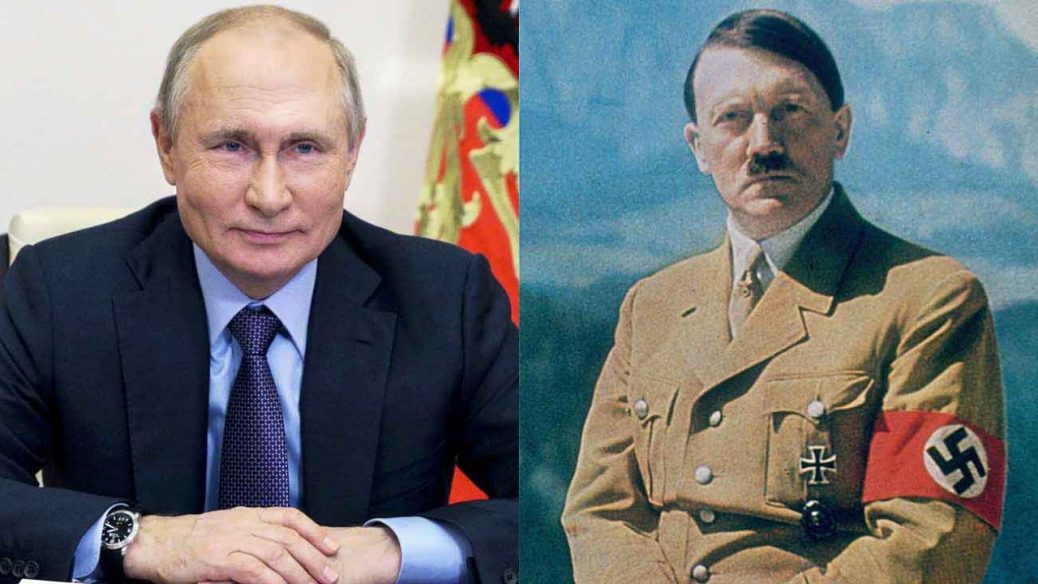 After the Russian army leave the Kyiv region, it became possible to think over the development of the current tragedy: the Russian military began the systematic destruction of the civilian population as early as the first days of March.

For almost a month dead people who were shot lay on the streets of Bucha, Irpin, Gostomel and other small towns in the Kyiv region, located on the path of the occupier.

Putin wants to destroy the Ukrainians as a nation, like Hitler wanted to destroy the Jews. He does not need Ukrainians even as an enslaved people, because he fears and hates them. Putin’s goal is to turn Ukraine into a scorched ashes, like Mariupol and Volnovakha, a nuclear springboard to threaten the West.

Putin is the greatest war criminal of the 21st century, determined to destroy an entire country and an entire nation in a matter of weeks. Even Hitler did not undertake such a scale of atrocities.

In Bucha, a small town near Kyiv, a spontaneous burial of civilians was discovered: a mass grave in which the Russian military buried over 300 people. Bucha is Ukrainian Srebrenica, a symbol of inhuman cruelty and actual genocide. The Russians want to exterminate the Ukrainians as a nation, and will do the same in any country they invade.

The army of the Russian Federation is a rabble of murderers, marauders, rapists and invaders. They destroy everything and everyone wherever they go.

The Russian military in the occupied territories were engaged in robbery and looting, taking the stolen goods to Belarus.

Belarus has organized trading of goods stolen by the Russian military, which are now being sent all over Russia by post.

The Russian military steal even spoons, not disdaining anything. Baseness, pettiness, a complete lack of morality – this is the true characteristic of the occupier.

In Bucha, Irpen, Gostomel and other small towns near the Kyiv region, Russian invaders killed the male population aged from 16 to 60: they carried out ethnic cleansing of Ukrainians as a people, similar to the Nazis in World War II.

The Russian army is a conglomeration of murderers and rapists, they do not know how to distinguish, and are driven by a manic desire to destroy. In the occupied settlements of Ukraine there are cases of massacres of the civilian population, rape of women. Eyewitnesses tell how Russian conscripts, who are 18-20 years old, just for fun shoot at people who stand with their hands up. Putin is only the result and embodiment of the meanness of the Russian people.

Eyewitnesses of the Second World War who have survived to this day say that the Russian military behave much worse than the Nazis: the senseless destruction and murders perpetrated by the Russians defy any logic and, moreover, no explanation. They are a collective destruction machine that moves forward, leaving behind corpses and destruction.

The goal of the Russian army in Ukraine is to destroy the Ukrainians, the hatred of which the Russians have at the level of genetics. This war, in a few days, embodied and proved what the entire civilized world doubted: the possibility of such a large-scale and barbaric genocide, which the Russians, obeying a common internal dictate, began to do in Ukraine. Bucha, Gostomel, Irpin – these cities must forever become the personification and proof of the crimes committed by the Russians – a nation of murderers and invaders.

In Irpin, the invaders destroyed half of the entire residential complex. It used to be small, beautiful cozy town, which was not lucky enough to be in the way of the advancing Russian hordes. Now it is a ruined city, people killed and tortured by Russian barbarians are buried right in the parks. Russia is the embodiment of primary evil. Destroying everything and everyone for the sake of destruction itself.

Just a month of the war, started by the occupier, not only destroyed many peaceful Ukrainians, but also wounded the souls and destinies of people. Even during the Second World War, such mass atrocities did not occur in such a short period of time. Many chilling eyewitness stories so terrible that it is impossible to believe in them. And they all took place in the suburbs of Kyiv, a beautiful, modern European city in 2022.

Putin exactly follows Hitler in an effort to carry out the genocide of an entire people, and Russian symbols and propaganda methods are a modern form of Nazi counterparts. From the very beginning of his rule, Putin has been constantly talking about Ukraine and Ukrainians, not only in a negative way – this is his fixed idea and a sore place, an “unclosed gestalt”, which he can close in only one way – to destroy it. And he will do the same in any country and with any people where the boot of the Russian occupier sets foot.

The corpses lying on the streets of the newly blossoming and lifeful Ukrainian cities are a surrealistic nightmare created by the maniac Putin and his army of murderers and rapists. This is an unthinkable crime, to which the West has no right to turn a blind eye, because tomorrow it will receive the same at home. Russia must answer for the crimes it commits and forever become a rogue among the civilized world.