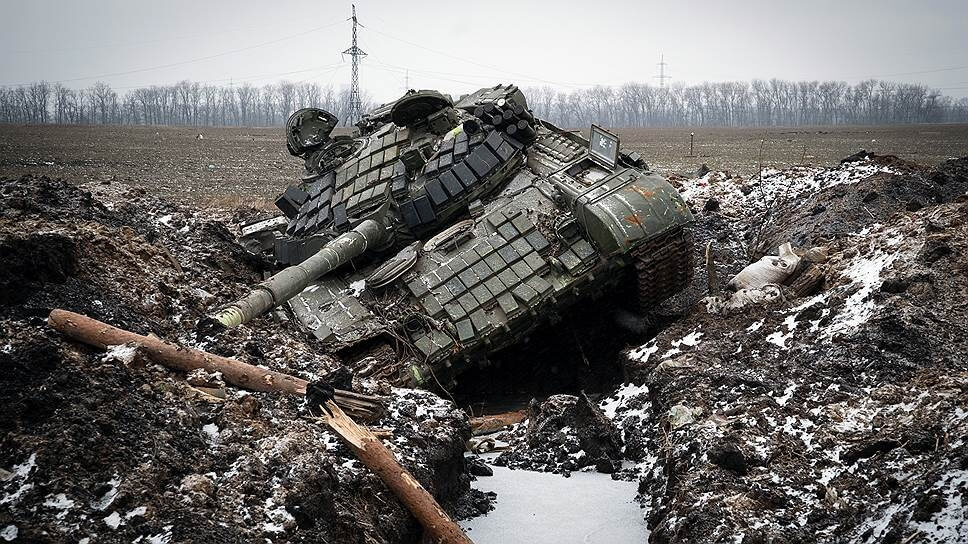 20-year-old Misha was born in Yekaterinburg, 21-yearl-old Lyosha in Mozdok; Artyom is 22 he is from Slavyansk-On-Kuban, and Dima is 23, he is from Vladikavkaz. And there are also residents of Chita, Norilsk and Ulan-Ude [all cities are Russian – translator’s note].

They have nothing in common at first sight. But there is one connecting element: city N, troop unit *****, N separate motorized rifle brigade.

All of them have been on military contract service until recently. In December and January they posted common photos from their unit on their pages in social networks, last summer they published photos with APC from the training. And there are also photos of them in nice uniforms in front of the mirror.

But everything changed 2 or 3 weeks ago, and now 2 comrade-in-arms without insignias embrace at one of the squares of Horlivka [in eastern Ukraine – translator’s note], another one publishes in the same social network a photo with three young guys on an armoured vehicle somewhere near Debaltseve. The third one posts a picture with a ‘DPR’ tank stuck in a trench – the main landmark at the entry to destroyed Vuhlehirs’k.

They got to the war after 20 January, when active military action started again in Donbas. They are on a kind of termless duty leave here. Their commanders had nothing against, on the contrary they welcomed the impulse and told why they needed to protect their homeland right now and in those very places.

They departed to Donbas not in their unit, but in groups of three – in combat crews. And now having no connection they ask me about their friends, if there are alive. On the spot, they were allocated in different earlier established units of the ‘DPR’ army.

The logic of military action in recent months is quite simple: those people who really know how to fight carry out combat missions on behalf of self-proclaimed republics, or “separate regions of the Donetsk and Luhansk Oblasts” (as
specified in the Minsk agreements). They complete their mission and retreat, substituted by local “rebels” in the captured population centre, commandants offices and at check-points who welcome journalists and readily tell about their past as miners. At some point one can really believe that these are only locals who fight with “junta”, but then someone of them gives away:

— There are Buryats [ethnic group living in of Russia’s republic – translator’s note] behind that terricone.

Everybody is smiling, everybody understands everything. On last days before final storm of Debaltseve, they tried to prevent journalists from entering Vuhlehirs’k from where the attack into the pocket started, for the journalists not to spot Buryats. Several days after the storm, after Debaltseve is completely captured, they will open the road for journalists again.

A lot has been told about strategic significance of Debaltseve lately: this is a direct road connecting Donetsk and Luhansk, a major railway hub and an important height from the artillery point of view. It will take a lot of time before we learn how many people were killed from both sided.

After Debaltseve has been captured the front line “straightened” again. It is possible that the Minsk agreements on ceasefire will be implemented at some spots, there will be no fire at all, or it will be not so intensive for a month
or two until someone will decide that the self-proclaimed republics can’t live without Mariupol, Artemivs’k or Lysychans’k. And then “political instructors” of all military units of the big country will become active again telling about importance of helping freedom-loving Donbas in face of aggression of the West. No enforcement, volunteers only.

Misha, Lyoasha, Artyom and Dima signed resignation. And if someone of these guys faced tough luck during attack on Debaltseve, then it was just a volunteer, who at the moment of his death had nothing in common with that military unit and brigade.

It reminds the Spanish Civil War a lot. The USSR volunteers went there with “Nansen certificates” or documents of one of the European countries. It was not so easy to get there, and the nicknames were different: the future Marshall of the USSR Rodion Malinovsky wasn’t called “Motorola” [one of Russian militant fighting on behalf of ‘DPR’ – translator’s note], but a colonel – “Colonel Malino”.

Military adviser Yan Berzin could die under the name of General Donizetti, but was finally shot in 1938 at Kommunalka firing range.

In the book People, Years and Life Ilya Ehrenburg recollects: “In 1943 at the checkpoint near Homel I saw army commander General Batov. We were discussing an upcoming attack. Suddenly someone shouted: “Fritz!” – enemy’s planes appeared. The general and me were laughing: in Spain our military advisers were known under different surnames: Valua, Loti, Molino, Grishin, Grigorovich, Duglas, Nikolas, Volter, Ksanti and Petrovich. Pavel Batov was somehow named Fritz”.

— Were you sent to the Rostov Oblast for training or were you said you were going to the war with Ukraine?

— They told us directly about the war. You can see by yourself, what those bastards do, everyone wanted to get here. I serve in the army not to learn how to sew or dig.

— And is your “duty leave” for a long period or is it termless, until you are called back?

— Until we leave by ourselves. I want to fight till the end of the war, or till my last breath.

— We were explained we would help to stop the war here. – He answered to me.

But it’s impossible to stop the war while sitting on an armoured vehicle. The war can be stopped only if all leave their armoured vehicles and come back home, at least to their home country from the neighboring one.

P.S. The author knows full names of the article main characters, but editorial staff thinks it would be wrong to publish them right now.

Original version in Russian language is available on kommersant.ru.