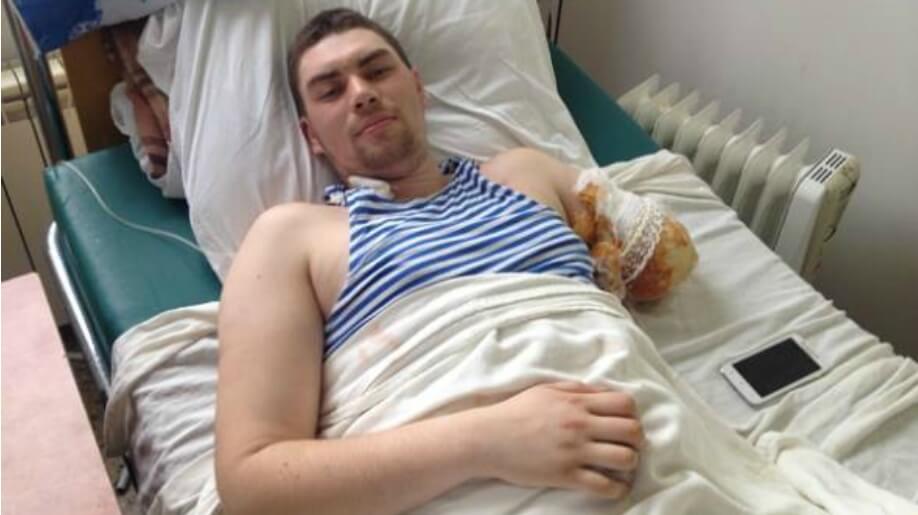 Everybody speaks of the dead – but the awful number of maimed for the rest of their lives rarely gets mentioned. This story is about heroic 23-year-old Ukrainian soldier who lost arm in Debaltseve battle, then both feet to frostbite.

Jesus! Help Vadym! It hurts to look at the photo, but how painful it is for him to suffer this!

23-year-old Vadym Dovhoruk from Kirovohrad lost his left arm near Debaltseve, during the first day of ‘ceasefire regime’, which was agreed and declared in Minsk on January 16, 2015. Vadym spent four days lying in the cold, waiting for help to arrive. Physicians were unable to save the frostbitten limbs of the soldier. They amputated them. The family of Vadym has started collecting money for rehabilitation and prosthetics for his son. A soldier of the Third Special Forces Regiment, Vadym was transported by airplane to the central care centre in Dnipropetrovsk. Miraculously, he did not die from blood loss and painful shock.

“I can not yet even predict when we will be able to transfer Vadym to our department,” says Nataliya Isayenko, the head of the septic-resuscitation centre for thermal injuries and plastic surgery, Kyiv Clinical Hospital No. 2. “Not only Vadym’s feet, but also his lower legs were affected, and there are areas of dead skin. But we are fighting for every centimetre of the affected tissue. “

“A long treatment and recovery await him. Unfortunately, the necrosis has set in into his feet. The treatment that we are conducting has not yielded positive results.

“It is painful for me to talk about it, how in this soldier who had already been left without an arm, we still had to amputate both his feet. “

Donations for Vadym are being collected. You can donate towards his treatment and prosthetics to:

Full story in Ukrainian is available on gazeta.ua