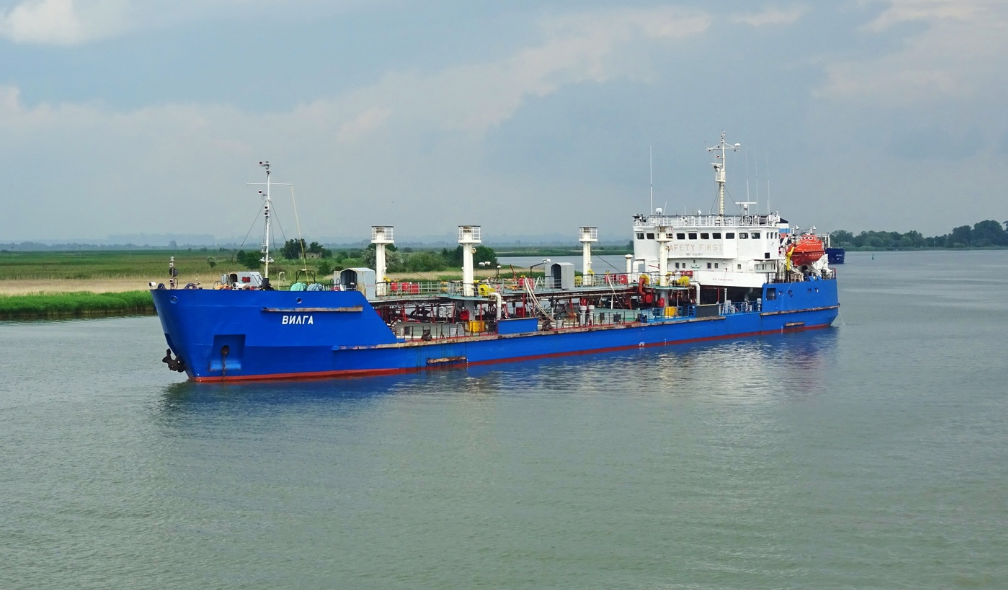 How Ukrainian oil comes to the Russian hands with protection of Putin’s crony Viktor Medvedchuk.

On August 10, the Crimean Prosecutor’s Office searched the MRIYA ship in Kherson.

The agency claims that in June 2015, the same vessel, but under the name Vilga, supplied fuel to the Black Sea Fleet units in Sevastopol. The ship is suspected of smuggling oil products.

However, on August 13, the Kherson city court denied a request of the SBU and the Prosecutor’s Office of the Autonomous Republic of Crimea to arrest the vessel. The Crimean Prosecutor’s Office is reported to be preparing an appeal against the court’s decision.

The MRIYA tanker (IMO: 9109811, MMSI: 272791000) is on international shipping registers. According to the Marine Traffic website, the ship is now moored in Kherson, but has an interesting story behind it. According to the records in the AIS register, the names and flags of this vessel were as follows:

Here we can also find information about the vessel, when its owner is Felina Development Lp, and the operator is the Russian JSC “Marshal Shipping Company”.

The Ukrainian Shipping Register states that Felina Development Lp is a Ukrainian company.

According to the UK registers, the company of the same name is registered in Edinburgh.

And it is registered in the name of Petro Belz. The documents show the year and month of his birth.

A person with the same name is in the Ukrainian registers as well. Given that the month and year of birth coincide, it is very likely to be the same person – Petro Pavlovych Belz.

Petro Belz is not an ordinary person. You can read more about his relations with Viktor Medvedchuk in the Nashi Groshi investigation.

There are a number of organizations registered in the name of Petro Belz in Ukraine. If you look closely at their activity, you will see that, for example, one of the companies – ANVITRADE LLC – managed to enter into12 agreements worth UAH 4.6 billion with Ukrzaliznytsia, according to DOZORRO.

Since the Crimean Prosecutor’s Office, together with the SBU, accuse the ship of having illegally supplied oil products to the occupied Sevastopol for the Russian Black Sea Fleet in June 2015 (i.e. more than a year after the annexation of Crimea and the beginning of the war in Donbas), these documents may shed some light on who was behind this scheme.

Even more interesting is that on August 13, the Kherson city court denied a request of the SBU and the Prosecutor’s Office of the Autonomous Republic of Crimea to arrest the vessel. Isn’t it because the beneficiary of the scheme is a person considered to be untouchable in Ukraine?

How blind is the Ukrainian justice? Does it make decisions on behalf of theUkrainian people in accordance with the laws of Ukraine, or are its decisions based on the interests of Viktor Medvedchuk and the Russian Federation? All of these questions remain unanswered.