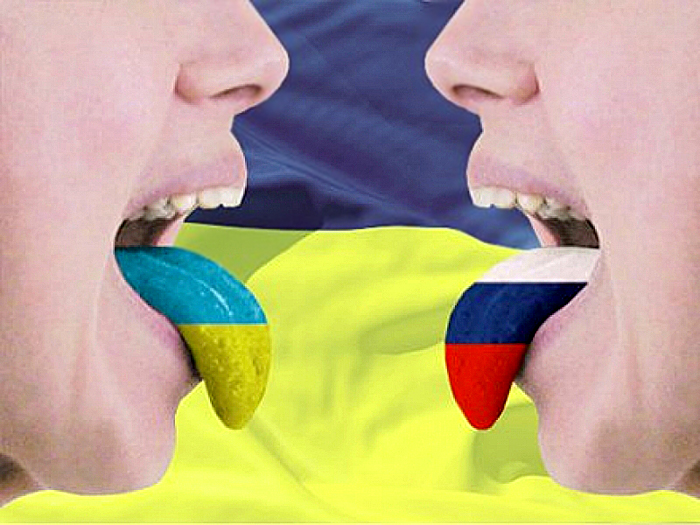 Consciously or subconsciously, but people in power have been adjusting the Russian imperial idea to the Ukrainian state concept of ‘Russian-speaking Ukrainians’. That’s why it succed throughout the years of Ukraine’s independence.

As they say ‘one passportization – one nation’. And although we are all Ukrainians de jure, half the population of Ukraine is Russian de facto!

We have become entangled with hybrid meanings, and, like small children, fuss over a false linguistic form ‘Russian-speaking Ukrainians’! THERE ARE NO THESE!

Nationality is not a birthplace. This is preeminently a structure that consists of mental and cultural codes, education, upbringing, historical involvement, and, above all, a language, which reshaped the borders of Europe in the 19th and 20thcenturies, as well as ours in the 21stcentury (when we entered the phase of active state formation).

There are probably more Russians in Ukraine than Ukrainians themselves. And they differ from the imperial (Russian) Russians by their desire for democratic development of Ukraine, though they generally consume the same media product (comedy shows, Russian pop songs, tabloids, Russian  series), celebrate or sympathize with Russian holidays like Victory Day, March 8th or February 23rd. Even in terms of food choices (Salade Olivier, dressed herring, Moscow sausage, vodka and Gaidai’s films for a holiday) – they are identical with the imperial Russians. Not to mention the language they cling to as if to a lifeline and a nutritious umbilical cord connecting them ‘with the great Russian culture’, which they exhibit as a shield and armor on guard of their own values.

Ukrainian Russians are active, creative, witty and often more successful than their compatriots, who choose the Ukrainian paradigm of being (the Russian-speaking market of goods and services is much larger) – this is about young people, for example, a ‘Little Red Riding Hood’ who felt like a ‘cornered dog’ at the funeral of a SBU colonel yesterday, and about Yuri Bardash from Alchevsk (ex-group “Griby”), who talked heatedly with Dud yesterday about how he is pressed in Ukraine.

I would like to identify separately the remnants of the classic ‘homo sovietikus’, or representatives of a separate ‘Soviet people’ (about the existence of which Khrushchov claimed back in 1962). But since there are many Ukrainian-speaking reptiloids of the classically left-wing Social Marxist type among this dying breed, I would rather not. Let them quietly live out their days … (but there is no fucking way with pensions for Donbas). It is fairer to die listening to Kobzon songs and receiving pensions from the” DPR,” especially when you believe in Gundyaev, the Kalashnikov gun and a bun for 3 copeckss.

What I am trying to say is the fact that modern wars are wars for identity!

Modern Ukraine with the imperial concept of “one country – two peoples” will not survive, like it or not…
Putin will not give Ukraine a chance!

In one way or another, he will come for each Ukrainian Russian – through gags of KVN team members, through Russian-language pop songs, through the poetry of Akhmatova and Bulgakov’s Voland; through calls for reconciliation and unity by Russian (sort of) dissidents and anti-systemists, or through Medvedchuk’s TV channels. He will come and take your soul, whether you like it or not … Because the hybrid ‘Russian world’ is everywhere, even if it speaks broken Ukrainian as the current president does.

We’ve got some difficult days ahead, gentlemen. There is no way you can come out dry … A terrible and irreconcilable war is ahead … FOR IDENTITY.

Without it, there will be no Ukraine. Instead, there will be territories populated by Russians pretending to be ‘Ukrainians.’ They are really one people with Russians!

Time is running out for you to decide who you really are.