Sea loop: how the Kremlin prepares to block Ukrainian ports 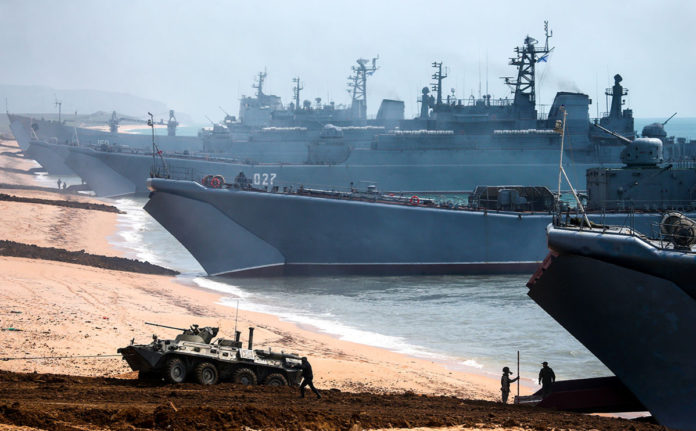 The Kremlin has completed large-scale military exercise, but the risks for Ukraine remain. The threat comes not only from land but also from the sea. Moscow is demonstrating its intentions to completely cut off Ukraine from trade routes in the Black and Azov Seas. This material will tell you how exactly the invaders intend to put pressure on Kyiv.

Since April 24, the Russian occupation command has closed off three Black Sea areas to foreign warships and government ships. The invaders blocked a small part of water area in the west of the peninsula, a part of water area between Sevastopol and Gurzuf, as well as an area off the coast of the Kerch Peninsula on the abeam of the Opuksky nature reserve. The restriction will be in force until October 31.

The Russian Defense Ministry insists that all three closed areas are allegedly “located within the territorial waters of Russia,” and their closure will not interfere with navigation through the Kerch Strait. In fact, this is a lie. The occupation authorities explain their decision by conducting “military exercises”.

“Six months’ “exercises” is just an excuse. The Kremlin’s main goal is to show that they are the “rightful owners” of the Black and Azov Seas, and to push through an informal recognition of their right to block international trade routes with impunity. We mean the Kremlin’s attempts to legalize the territories stolen from Ukraine and test the reaction of the West,” Bohdan Ustymenko, Head of the Ukrainian Institute for Security and Law of the Sea, told the Flot 2017.

The Ukrainian Foreign Ministry called the invaders’ actions “usurpation of the sovereign rights of Ukraine as a coastal state.” The reaction of the US State Department was rather restrained.

“The United States expresses deep concern over Russia’s plans to block foreign naval ships and state vessels in parts of the Black Sea, including near occupied Crimea and the Kerch Strait,” said US spokesman Ned Price.

The Russians have actually blocked the entrance to the Kerch Strait, which they, in violation of international law, consider their “internal waters.” The Russian command, judging by their actions, is considering several military scenarios against Ukraine, including a large-scale escalation, when the occupying troops will attack from the sides of Crimea and temporarily occupied territories of Donetsk and Luhansk regions simultaneously.

In fact, by closing off Azov and part of the Black Sea to foreign warships, the invaders actually free themselves.

“The Sea of ​​Azov and the Kerch Strait, according to the 2003 Treaty, are the shared internal waters of the two countries. That is, international maritime law is not fully valid there. Therefore, the border boats of the FSB play the master in the Azov Sea. It was through the Volga-Don Canal that the Caspian fleet sailed there. That is, the Sea of ​​Azov is completely militarized by Russia. Even on the part of the coast of the Sea of ​​Azov, which remained under our control, there are about seven dangerous landing sites due to the shallowness,” ex-defense minister and secretary of the National Security and Defense Council Yevhen Marchuk said in his comment to Radio Liberty.

There is no sense in starting a game with the closure of the Kerch Strait just for blocking the Azov ports of Ukraine.

“According to rough estimates, about 10 million tons of cargo pass through Berdyansk and Mariupol per year, which is less than 10% of the total volume of cargo transshipment through Ukrainian ports. The blocking of the Azov ports is unlikely to bring Ukraine to its knees, but it will be used by Russians for political pressure and demonstration of their  advantages,”says military-political expert Nikolai Beleskov.

Here the RF may have more dangerous for Ukraine goals, which are also associated with a possible massive escalation.

“During the recent exercises in Crimea, the Russians rehearsed the options for partial or complete cutting off of Ukraine from sea trade, both in the Azov and Black seas. This scenario is much more dangerous than the blockade of Berdyansk and Mariupol,” added Nikolai Beleskov.

The invaders began to prepare for a possible blockade of Odesa immediately after the seizure of Crimea, when the so-called “Boyko’s drilling rigs” in the Black Sea were turned into military facilities. The Russian command threatened to “inspect” ships passing near the rigs, which actually meant blocking merchant shipping. The Russians, among other things, seized the Sea of ​​Azov through similar “inspections” of merchant ships sailing through the Kerch Strait to Berdyansk and Mariupol.

The Russian command, at a minimum, demonstrates its readiness to cut off Ukraine from international trade at any time, and simultaneously strikes a blow against economic interests of Western states. If the political reaction of Americans and Europeans to such actions is sluggish, then the risks of such a scenario will increase.