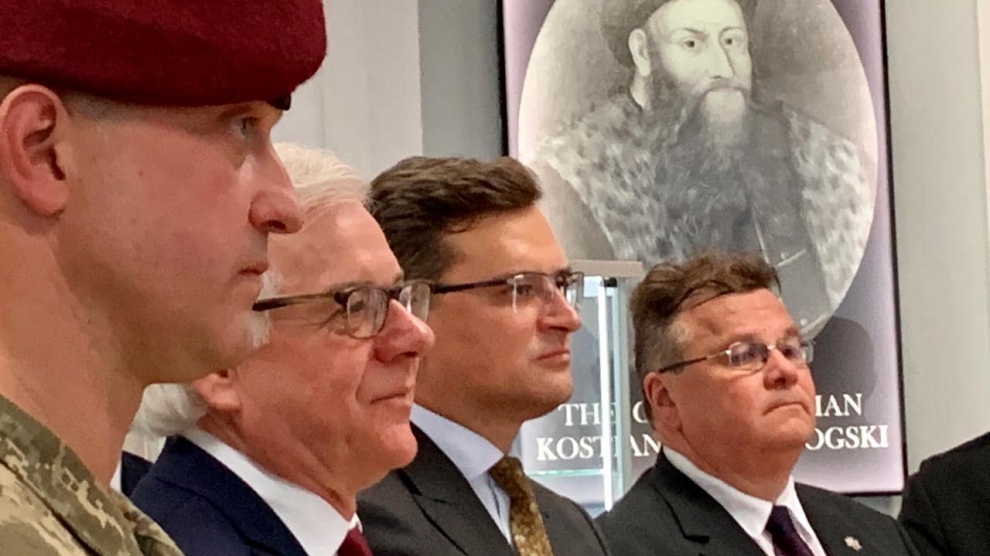 Ukraine, Poland and Lithuania launched Lublin Triangle on July 28, 2020. The foreign ministers of the three countries – Dmytro Kuleba, Jacek Czaputowicz, and Linas Linkevičius – announced  the creation of a new regional cooperation initiative, the Lublin Triangle, which will focus on the cultural, economic, and strategic interests of three central European nations.

What the Lublin Triangle is?

Dmytro Kuleba, Minister  for Foreign Affairs of Ukraine, said it was “Ukraine’s next step towards Europe.” According to him, the Lublin Triangle countries will jointly oppose Russian disinformation, and partners from Poland and Lithuania will support Ukraine in its European and Euro-Atlantic aspirations.

“The intentions are good, and they should be welcomed,” commented Volodymyr Ohryzko, the former Minister for Foreign Affairs of Ukraine. He noted: “The question is whether it will be a formal cooperation, and we already have quite a lot of them, or it will be filled with real meaning.”

The diplomat outlined the tasks on which, in his opinion, the Lublin Triangle should focus:

“This is NATO, this is the European Union, this is countering Russian aggression, this is lobbying our interests related to both Donbas and Crimea. These are the most urgent current issues.”

Another expert, Stanislav Zhelikhovskyi, a leading expert at the Diplomatic Academy at the Ministry of Foreign Affairs o fUkraine, emphasizes the historical basis of the newly created international union.

“The Lublin Triangleis a new tripartite cooperation format based on the traditions and historicalties of the three countries,” Zhelikhovskyi  told theVoice of America.

He added: “Such an association as the Polish-Lithuanian Commonwealth was also formed in the city of Lublin. And it is since then that the tradition of uniting the peoples living in Eastern and Central Europe has been going on. ”

The expert drew a parallel between the Lublin and the Weimar Triangle. The latter includes Poland, France and Germany. At the time of its creation, Poland was not a member of either  NATO or the European Union. And now Ukraine is in the same role.

According to him, “One of these common interests is to guarantee security in the region, that is to jointly counter Russian aggression, including information aggression. Therefore, I think that this “triangle” has serious prospects. “