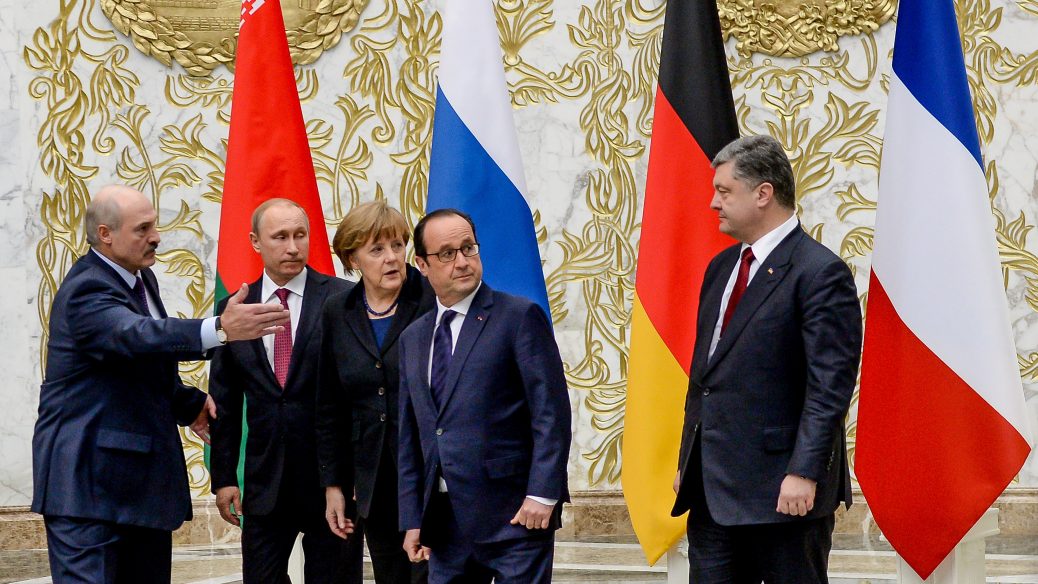 Ukraine’s refusal to voluntarily put its head in the noose just because everyone likes Ukraine and based solely on the “Mickey Mouse” document entitled “Minsk agreements“, which is not an international treaty and cannot impose any international obligations on Ukraine, came as an unpleasant surprise both for the USA, Germany, France and the Kremlin.

This tough position taken by Ukraine broke the plans of the powerful World players and now they all together find themselves in new situations. Each – in its own situation, and each of them is trying to harvest benefits from this situation.

By its game of exacerbating hysteria, the US has created a win-win situation for Biden. If Putin decides to attack Ukraine – Biden has warned everyone, withdrawn embassy staff and instructors, called the Kremlin, tried to reason with the Kremlin’s madmen with threats of sanctions, but … Americans don’t want a nuclear war, do they? If Putin decides not to attack Ukraine – it has been Biden who has stopped the aggressor with his phone call!

Whatever happens next – Biden has some benefits ahead! And even if Ukraine eventually backs down, unable to withstand the psychological pressure and economic losses, that’s also good. Biden will say that he has brought peace to Europe and stopped the war.

France, with its dreams of Europe from Lisbon to Vladivostok, and European security forces separate from NATO, are at a loss. Their Game for the peaceful surrender of Ukraine to the control of the Kremlin has failed, and Macron has no option but to use international contacts to raise his rating on the eve of the presidential elections in France.

Germany, too, is frustrated by the failure of its game of quietly turning Ukraine over to the Kremlin. For nine years they tried, worked, made turnarounds and used a smokescreen to no avail! An attempt to profit from the launch of NS2 is also under threat: if Putin openly decides to fight in Ukraine, the whole deal on NS2 between Germany and the United States is off, the pipeline certification and the pipeline itself is off!

Britain is only trying to find the contours of its game in Europe, and has not yet ventured to sign an alliance with Poland, the Baltic countries and Ukraine. But it will gladly rob the Russians who have a secure hiding-place in Foggy Albion.

Turkey, too, is only groping for its game as to Ukraine, and the free trade zone, signed in the midst of hysteria, indicates that Turkey is ready to be in this game.

But the Kremlin, with its game of intimidation of the United States and demands to sign a NATO-RF treaty, giving it control over Ukraine, has found itself in a situation from which there is no good way out for Putin. If Putin decides to fight in Ukraine, there will be sanctions, confiscation of Putin’s and his servants’ assets in the West, the risk of social upheaval within the Russian Federation and the risk of a military defeat. All this creates critically serious prerequisites for the loss of power by Putin personally. The West will rob the Russian Federation and personally Putinists with great pleasure (then it will offer a hand of friendship again), Putin’s entourage will take advantage of his fiasco to seize power in the Kremlin, and what are the benefits for Putin personally in such a scenario? He knows that he will not take Kyiv by military means.

If Putin decides to crawl away, muttering with the lips of Lavrov that they never intended to fight with Ukraine, there will be a solid loss for the status of “macho” and “leader of the Great Russian pack” …. But the losses are not sufficiently dire to lose power in the Kremlin. Power gives him everything: fame, money, respect, a sense of his own security, and confidence in the future. Therefore, Putin will make his decision by weighing the risks to his personal power in the Kremlin.

But Ukraine, led by its political leaders into the jaws of the Kremlin for nine years, by its actions has created a new situation in which it has the opportunity to survive and maintain its relative independence. Moreover, in order to take advantage of these opportunities, Ukraine does not need to persuade anyone to do or not do something; it does not need to ask someone’s consent or someone’s help. It is a unique moment, which happens once in a hundred years, when Ukraine can save itself! Ukraine has the Budapest Treaty, according to which the USA, France, Great Britain and the Russian Federation are obliged to ensure the inviolability of the borders of Ukraine! There is a procedure on the Ukraine’s actions in the event of a threat to its territorial integrity, and there are obligations of the signatory countries to provide their representatives to discuss the current situation and possible steps of the signatory countries to eliminate the threat.

There is also the UN Charter, which Ukraine can and must use if it sees a threat of military aggression from another state! And most importantly, there are Western citizens who have begun to understand the essence of the events taking place in the East of Europe and the essence of the actions of their political leaders …

Ukraine must counterattack, defending itself by all means, and the whole world will be on its side, and the pressure of the citizens of the West will not allow the local Macrons – Bidens to make turnarounds and fool around!