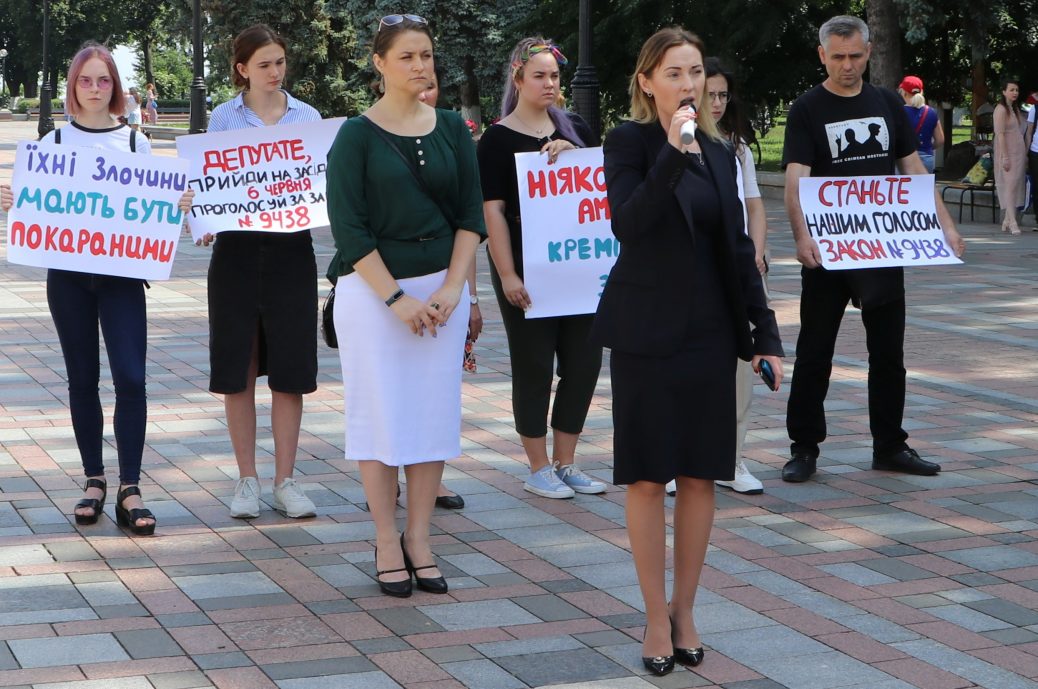 Activists call on the Ukrainian Parliament to pass the law to hold those responsible for war crimes liable.

According to human rights defenders, thousands of people who fell victims to the war in Donbas, were waiting for the law to be passed. Until the amendments are introduced, Ukraine’s Criminal Code does not foresee criminal liability for crimes against humanity and war crimes.

On the voting day a few dozens of activists rallied outside the Parliament to support the draft law in question.

“If you, dear MPs, could imagine at least 10 per cent of what the people in captivity felt, you would pass the law immediately,” said Olena Rybak, the wife of Volodymyr Rybak, a deputy of Horlivka city council tortured to death by Russia-backed militants.

Participants of the rally also used loudspeakers to play the audio – testimony of those who survived captivity and torture. They also made an installation demonstrating the “luxurious” items that those held captive in the basements in the occupied area were using daily.

Yevhen Shlyakhtin, a survivor of the militant captivity in Luhansk region, said that in addition to holding those responsible liable, former prisoners that survived captivity need to be granted a special status entitling them to free healthcare services and financial assistance. “Many prisoners are also internally displaced, they lost absolutely everything, they don’t even have a chance to undergo a regular medical checkup or rehabilitation,” Shlyakhtin proceeds.

According to the activists, the draft law no.9438 foresees amendments to the Criminal Code that introduce liability for crimes against humanity as well as simplify the investigation procedure for war crimes in national judiciary. The draft law will be considered in the second reading.