Home NEWS UKRAINE About 10,000 people gathered to protest against “Steinmeier formula” in Kyiv

About 10,000 people gathered to protest against “Steinmeier formula” in Kyiv 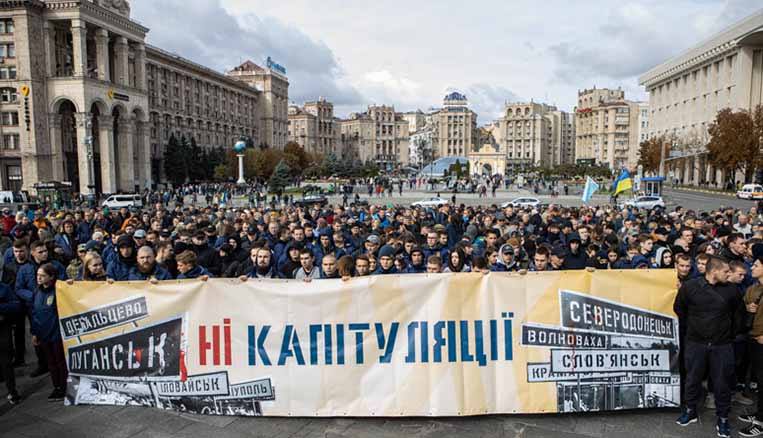 On Sunday, October 6, Ukrainian activists gathered on Maidan Nezalezhnosti in Kyiv to protest against the “Steinmeier Formula.”

Protesters were holding the national flags and “No surrender” posters. A stage was rigged up near the Independence Monument. Activists, opposition MPs and military stood on the stage and took the floor.

On October 6, participants in the viche against the “Steinmeier formula” wrote an appeal to President Volodymyr Zelenskyy and the Verkhovna Rada.

At the end of the meeting the organizers read out the appeal conclusions. Thus, Ukrainians demand the prevention of Ukraine’s surrender to Russian aggression as well as the prevention of the decisions that would lead to the surrender of the country’s interests.

The authors of the appeal called on Zelenskyy, the Verkhovna Rada and the government to form and implement state policy on the occupied territories under the current law on the special order of local self-government in certain regions of Donetsk and Luhansk regions.

Protesters also demand to prevent elections in the occupied territories of Donbas until militants are disarmed and sentenced.

“Donbas and Crimea must return to Ukraine together without any Kremlin’s conditions,” they emphasized.

After that the participants in the event moved towards the government quarter. At the end of the rally, they urged people to take part in the protest march on October 14 “regardless of their political views.”

About 10 thousand people took part in the rally, and 300 law enforcement officers were in the center of the capital. By now the rally has been completed, no violations of the public order have been recorded.