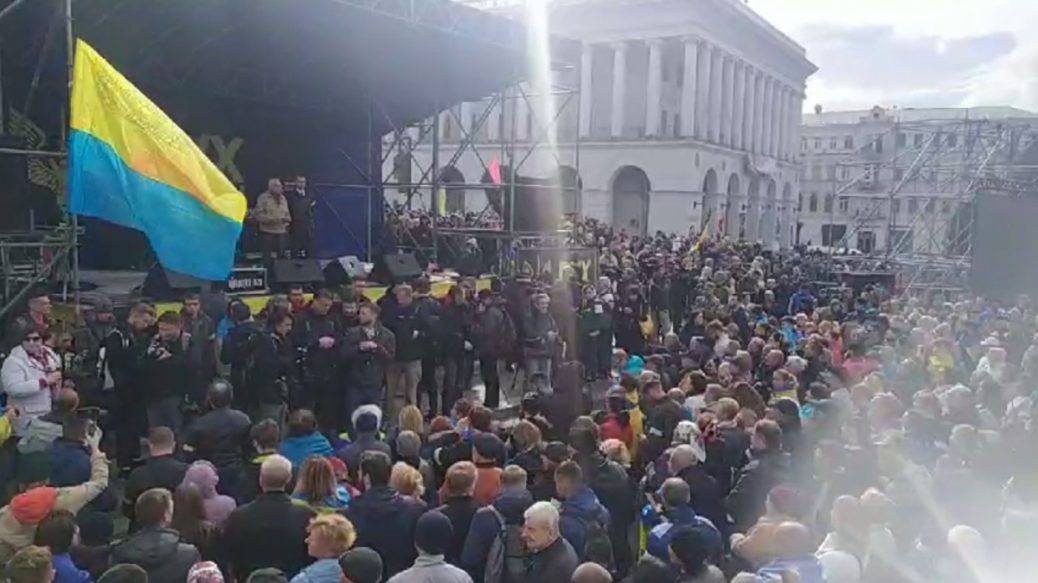 On October 6, participants in the viche against the “Steinmeier formula” wrote the following appeal to President Volodymyr Zelensky and the Verkhovna Rada.

Ukrainian society strongly protests against the implementation of the so-called “end-of-war” plan. According to President Volodymyr Zelensky, he agreed it with Putin single-handedly.

The plan envisages elections in the occupied territories of Donetsk and Luhansk regions and an establishment of a special status there.

These intentions of the President are contrary to the will of the Ukrainian people. The results of opinion polls have shown for years that a vast majority of Ukrainians do not accept elections in the occupied territories, nor the creation of pro-Russian autonomy with a special status, or any other concession to the aggressor that contradict the national interests of Ukraine and are destructive to its independent statehood and civilization choice.

Guided by the interests of the Ukrainian state and the will of the majority of Ukrainians, we call on all not indifferent citizens to mobilize nationally in order to organize widespread opposition to illegal and unconstitutional actions of the government.

To every citizen of Ukraine.Personally send the President of Ukraine and the People’s Deputy from your constituency a request not to initiate or adopt any decisions and legislative acts that will lead to capitulation to the Kremlin.

To local activists. Organize cells of the Capitulation Resistance Movement throughout Ukraine. Conduct public outreach activities to explain the real consequences of the end-of-war plan.

To three parliamentary factions: Batkivshchyna, European Solidarity and Voice. Officially create the No Capitulation! opposition platform  in the Verkhovna Rada and establish its cooperation with the Capitulation Resistance Movement

To the Ukrainians abroad.Appeal to French President Emanuel Macron and German Federal Chancellor Angela Merkel and warn that their involvement in imposing capitulation on Russian terms onUkraine will mean their complicity in aggression against Ukraine.

To the allies of Ukraine in NATO and the EU. Strengthen the coalition for countering Russian aggression against neighboring countries. Efforts must be combined not only to support Ukraine now, but also to guarantee security to all neighboring states that are or may be a target of Russian aggression.

To the President, the Verkhovna Rada and the Government. Form and implement state policy on Russia and its occupied territories on the basis of the current Law of Ukraine “On the features of state policy and securing state sovereignty of Ukraine over temporarily occupied territories in Donetsk and Luhansk regions.” Russia is an aggressor and should bear full responsibility for the crimes against Ukraine and the situation in the occupied territories. Donbas and Crimea should return to Ukraine together, without any terms and conditions on the part of the Kremlin.

We also demand that the President immediately dismiss Andriy Bohdan, Head of the Presidential Office, as a person who was behind the failure to sign the Association Agreement with the EU in 2013 and for his contempt for civil society.

We urge all citizens of Ukraine to support the open public appeal  to the President of Ukraine “We will not allow capitulation!” of September 17, 2019. The petition initiated by well-known representatives of civil society sets out key provisions of Ukraine’s national position during the negotiations in any format.

We also invite you to participate in protests on October 14 in Kyiv and on the grounds.