Home » According to your deeds be it done to you

According to your deeds be it done to you 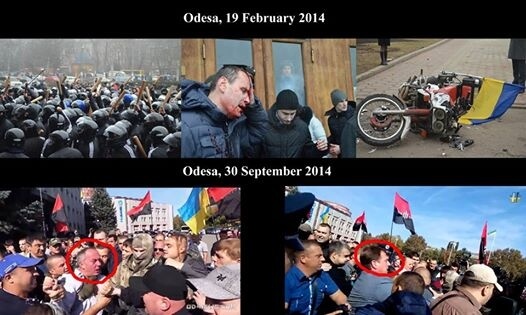 Odesa, 19 February 2014 – peaceful activists rallying against killings at Maidan were severely beaten by dozens of ‘titushky’ wearing black outfit and helmets and equipped with clubs near the Odesa State Administration. Beating is believed to be organized by Mykola Skoryk, who was the governor of Odesa Oblast and member of Yanukovich’s Party of Regions at that time.

No one was prosecuted.

Odesa, 30 September 2014 – Nestor Shufrich, odious ex-member of the Party of Regions and zealous supporter of Yanukovich, and mentioned Mykola Skoryk were beaten near the Odesa State Administration by locals for all their deeds.