Military vehicles, weapons, ammunition that Russia uses in Donbas are on show in Kyiv 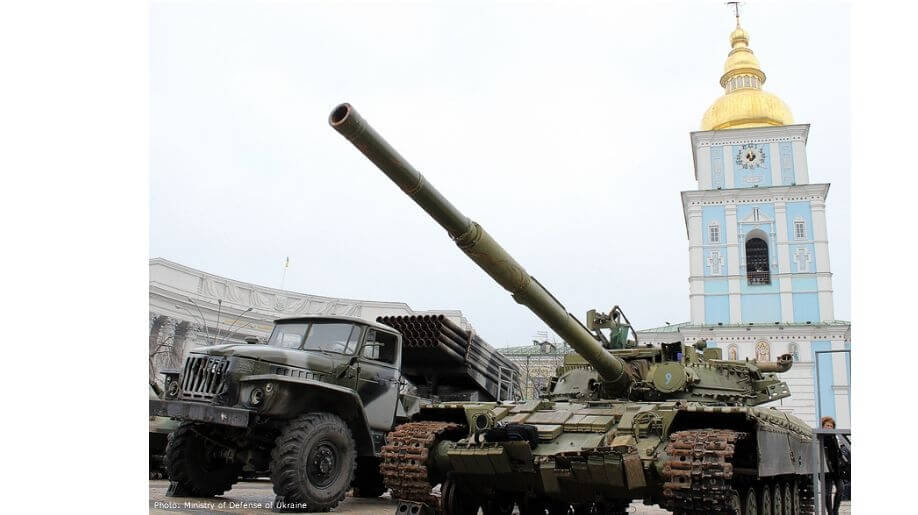 Military vehicles, weapons, ammunition and drones that Russia uses against Ukraine in Donbas are being showcased on Mykhaylivska square in Kyiv. Often Russian-produced or modified in Russia the items on display were seized by Ukrainian forces in Donbas where Russian-backed militants and Russian regular troops used them against Ukrainian army and civilians. The unique exposition was arranged by the Presidential Administration and consolidated efforts of several state agencies including the Defense Ministry and law enforcement agencies who provided the actual exhibits from the frontline.

The pictured T-64BV tank was seized by Ukrainian Armed Forces when Russian-backed militants attempted to break through the encirclement in Sloviansk, Donetsk region. The tank was produced by the Malyshev Factory in Kharkiv, Soviet Ukraine in 1987, the vehicle’s production number is Ts11ET12109. Post-production story of the tank remains unknown. However it never went into service with the Ukrainian Armed Forces. The tank is equipped with the 12CT-85PM battery manufactured in 2010 by “Elekrotyaga” Leningrad Battery Plant in Saint Petersburg, Russian Federation. Marking discovered on the battery reveals it is part of the inventory of the Russian military base no.74814 (Budyonnovsk, Stavropolsky district of the Russian Federation) of the 205th motor rifle brigade of the Russian Federation Armed Forces. This “Granat-4” unmanned aerial vehicle was conducting aerial reconnaissance of Ukrainian forces positions in the area of Shchastia in Luhansk region. The UAV was downed by Ukrainian forces on 27 November 2014. The intelligence data extracted from the UAV revealed that the drone took off from the territory of the Russian Federation – Yelan village of Tarasovsky district in Rostov region. The UAV is not registered with the Ukrainian Armed Forces. “Granat-4” is produced by “Izhmash – Unmanned Aerial Systems” LLC located in Izhevsk, Russian Federation. The UAV went into service with the reconnaissance units of the Southern Military District of the Russian Federation Armed Forces in 2014. This BMD-2 (airborne combat vehicle) was seized by the 25th Dnipropetrovsk Airborne Brigade of the Ukrainian Armed Forces in an engagement with the enemy in Luhansk area last August. The BMD was damaged in combat and later evacuated to Debaltseve on 24 August. The vehicle bears military number no.234 and a tactical sign for quick recognition (shaped as a white reversed triangle) nearly wiped out supposedly to make identification harder. Tactical sign of the same shape as well as the same military number were born by the BMD-2 vehicles seized by the Ukrainian forces in Lutuhynsky district of Luhansk region in the same time period last August together with the crew and documents identifying them as servicemen at the military base no.74268 of the Pskov 76th Air Assault Division of the Russian Federation Armed Forces. Photo: Administration of the President of Ukraine

These are parts of the reaction rocket projectiles of the “Smerch” 9K58 multiple rocket launcher system (MRLS) launched at Kramatorsk on 10 February 2015. The shelling resulted in both military and civilian casualties. The parts include a flight stabilizer (tail section of the rocket) discovered at the crossroad of Lenin str. and Kramatorsk blvd; a rocket booster (tail section) found at 42 Dvortsova str. near a private house; a rocket explosive section (body part) discovered on Gvardiytsiv Kantemyrivtsiv str. and a rocket control block (body part) found at 22A Kramatorsk blvd. This ammunition is not registered with the Ukrainian Armed Forces.

Other exhibits include photo and video footage of the Russian aggression in Donbas, IDs, propaganda information materials as well as civilian vehicles hit in the deadly shelling of Mariupol this January. Photo gallery: Administration of the President of Ukraine / Radiosvoboda.org / EMPR

The exhibition is open for visitors daily from 10.00 to 22.00 on Mykhaylivka square in Kyiv. The show’s last day is 28 February.

Exhibits’ technical data is quoted based on the exhibition’s information materials available on the spot.