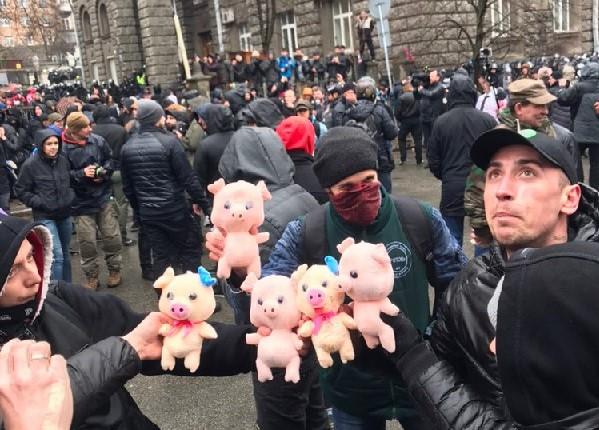 Participants of the rally against embezzlement in the defense industry pelted the police with toy pigs.

Participants of the National Corps action “#SvinarchukPoroshenko – behind bars!” held a rally near the Presidential Administration of Ukraine demanding to punish those guilty of embezzling funds in the defense sector, in particular, the Ukroboronprom state-owned concern. According to an UNIAN correspondent, on the way to Bankova Street, the protesters threw toy pigs into the air and into the police who accompanied them.

The approach to the AP was under heavy guard. The protesters kept pelting the police with toys and demanded to punish those involved in journalist investigation concerning embezzlement of the military budget.

Leader of the National Corps, Andriy Biletskyi, addressed the protesters and expressed his conviction that President Petro Poroshenko could not punish the former First Deputy Secretary of the National Security and Defense Council Oleh Hladkovskyi and his son Ihor, who, according to journalists, made millions on illegal schemes. According to Biletskyi, “Poroshenko knows perfectly well that if he turns them in today, they will turn him in tomorrow.”

“Therefore, it’s much easier, instead of locking them up, to declare that each Poroshenko’s opponent is a hand of Moscow,” Biletskyi said and added that the National Corps would stop their actions if the president punished those involved in corruption schemes in the defense industry.