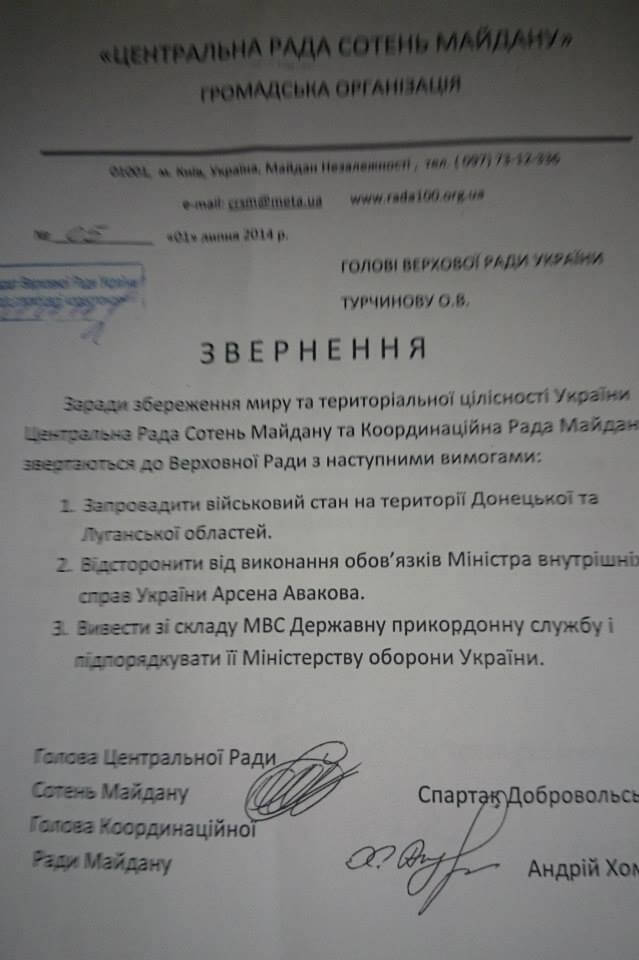 July 1, 2014, Kyiv. At 09:30, the Reanimation Package of Reforms group (RPR), men of the Central Committee of Maidan Hundreds (Sotnia or Company), Kozaks of the Ukrainian Kozak Army, activists from the Maidan Coordination Committee, and other Maidan activists began an ongoing “preventive campaign.” with the purpose of addressing the Verkhovna Rada, Ukraine’s legislature, MaidanPressCenter reports.

The sotnyks and kozaks blocked all the entrances and exits to VR buildings. According to their spokespersons, the picket was peaceful and no forceful actions had been planned.

However, near one of the exits on vul. Sadova, three provocations were instigated against the Maidan activists, as a result of which several people were injured. Present at the scene were Mykola Bondar, Spartak Dobrovolskiy and Anatoliy Motchaniy.

“This is a preventive action, as we believe our elected representatives should be working a full working day,” noted Otaman Bondar of the Ukrainian Kozak Army. “They should be listening to the voice of the people and adopt legislation that reflects the demands of the people, among which is the demand that all recesses be cancelled until such time as a number of laws have been passed regarding VR elections.” “Every deputy who tried to leave the building was requested to return to his or her workplace,” added Dobrovolskiy. “Around 14:00 on vul. Sadova near the VR Committees an attack was organized and a conflict stirred up. There was both beating and shooting. This provocation was organized by the forces of the 17+ Hundred that is under [Interior Minister Arsen] Avakov and [former Maidan Commandant Andriy] Parubiy. Our sotnyks and kozaks pushed them back towards Mariyinskiy Park, where they were broken up and forced to regroup. After that, arming themselves with sticks, weapons and firearms, as well as flashbangs and gas grenades, they organized a second attack that included tossing grenades at the sotnyks and kozaks.

Dobrovolskiy continued to comment on this incident, saying, “We consider these men traitors who operate the same way as Yanukovych’s titushky, only now they are operating on orders from Avakov and Parubiy.

Anatoliy Motchaniy, the chair of the Lustration and Anti-Corruption Action Committee of the Maidan Coordination Committee (MCC) described the incident: “Members of the Maidan Hundreds were standing outside the Committee Buildings on vul. Sadova. Around 15:00, perhaps 10 unidentified men in uniforms approached them from the direction of the Cabinet of Ministries, walking in groups of two with posters and branches in their hands. One of them even had a balaclava on. “Mykola Bondar tried to ask them why people in balaclavas were walking around in the Government quarter, but was given no answer. Instead, a fight followed immediately. Three flash grenades were tossed and a can of tear gas. Reinforcements came from the Maidan group, who ran towards vul. Institutska. The last thing that was thrown was a molotov cocktail that failed to light.”At the end, the sotnyks, kozaks and other activists pushed these attackers out towards Mariyinsky Palace where, under the cover of the police, these attackers were dispersed.