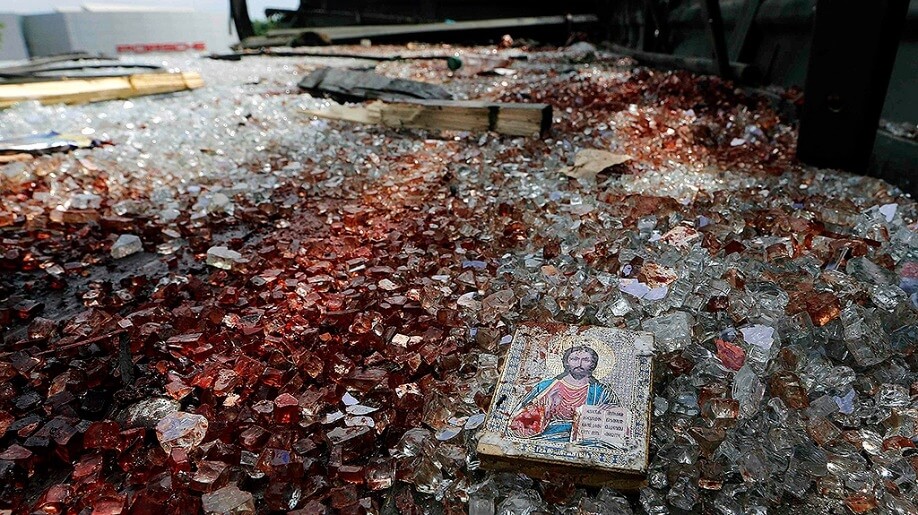 Vitaliy Portnikov: Three years ago when new airport terminals were being built in Ukraine in preparation for the forthcoming European Championship soccer games I, unlike many of my compatriots, was not too excited.

Three years ago when new airport terminals were being built in Ukraine in preparation for the forthcoming European Championship soccer games I, unlike many of my compatriots, was not too excited. Ukraine’s calamitous economic situation was no secret even then, and it seemed to me that under circumstances such as those setting aside funds from the state budget for the construction of extravagant airport terminals was reckless and wasteful. Of course in those cities where the construction was to take place the public thought otherwise. Even the fact that those huge airports stood empty after the games were over had no effect on the public’s good spirits. After all, isn’t it better to have a modern airport terminal even if it is barely used than to have that eyesore, that primitive soviet hangar?

Donetsk was among those lucky places that got a new airport terminal. Dnipropetrovsk and Odesa were left with their old ones. Everyone agreed that Donetsk deserved a new terminal. At the time of construction practically the entire Ukrainian government including the leadership in Parliament were natives of Viktor Yanukovich’s region. In addition, a friend of the president, the oligarch Rinat Akhmetov built a magnificent stadium in the mining city of Donetsk and instantly the stadium became a fresh symbol for the city. The airport, named in honor of the Russian composer Sergei Prokofieff (who was born in the Donetsk region), nicely rounded out the desired effect to the image of the city. And many residents of Donetsk agreed that, yes, their countrymen stole a hell of a lot of money. But sooner or later, they thought, the stealing would stop while the airport and the stadium would be there for posterity.

Today in Donetsk not even a hint of the airport remains. Not of the new one and not of the old one. The stadium is still sort of there, but that’s irrelevant because the home soccer team “Shakhtar,” another symbol of Donetsk, has long ago fled the war-torn city. As have two other symbols of Donetsk: Viktor Yanukovich and Rinat Akhmetov. For the time being, those two fled in two opposite directions.

Following the orders of Alexander Zakharchenko (to be precise, the orders were given by his Russian handlers because as a rule the head of the so-called Donetsk Peoples’ Republic never makes any decisions on his own) the airport has been completely razed. The airport had been bombarded by DPR artillery, which means, of course, with weapons brought in from Russia. The Kremlin strategists will explain the final and complete destruction of the airport as a necessary step in straightening out the demarcation line and in transforming Donetsk into a hot spot city and other such nonsense. What they have actually done, though, is they have pushed Donetsk and the entire occupied territory into reverse making sure that it will all be decades behind the civilized world.

There is nothing left in Donetsk that one could be proud of. There is no more great soccer, there is no airport, there is no more working industry. The whole country had profited from the industry in Donetsk. Today there is no-thing left. All that has remained in Donetsk are people, scared people, poor people, people who do not comprehend what is happening to them or what will still happen to them, people who have been fooled by Russia and cut off from Ukraine. Donetsk has become a place where the preferred mode of transportation is a tank. It has become a city out of which you cannot fly. It has become a place that instead of being under the administration of government officials is being run by crazy gopniks [member of a criminal subculture] with bulging eyes, the stand-ins for important Muscovites in nice clothes who huddle together as they review the new plans for tomorrow’s bombings, killing and assassinations.

Donetsk is no longer a city. Months of occupation have transformed it into a place where senselessness, horror and futility rule and where civilization went out the window like air escaping a punctured balloon.

And this precipitous plunge into obscurity, this cold-blooded destruction of a once thriving city with a population of a million people was all done for the sake of making a petty little Kremlin man with shallow ambitions happy. This city serves as an excellent model for the “Russian world” the wretched little man is poised to build. A “Russian world” built on the bones of those who died under the rubble of the still recently glistening airport terminal. A “Russian world” in the midst of ruined streets, boarded up windows and crippled people. The pathetic little man is building a “world” that is worse than war.

Europeans, and especially those of us who live in the post-Soviet space are living on top of ruins. Seventy years ago our cities were bombed and shelled and all that was left were skeletons of buildings. And suddenly, unexpectedly, it is starting all over again. It seems like today Donetsk is reliving its 700 days of Nazi occupation: in the first days of the so-called Donetsk Peoples’ Republic Jews were required to register, prisoners of war are made to fight for their land, and those same prisoners of war are paraded along the streets as the collaborators of today’s regime stand watching and ululating. All of this has happened before, fairly recently. The circus “Cosmos,” newly ravaged by the current war still adorns the city just like it adorned the city back when it was built on the ruins of the ghetto after the Jews were forced out of Stalino [one of the former names of Donetsk] on their final journey. And the prisoners of war, the “Cyborgs” are paraded in the streets. And a rumpled tyrannical gauleiter is busy spreading horror and devastation unreservedly blatantly as, feeling wholly uninhibited about his task he freely ranges across Donetsk.

Was it yesterday that Hitler died?