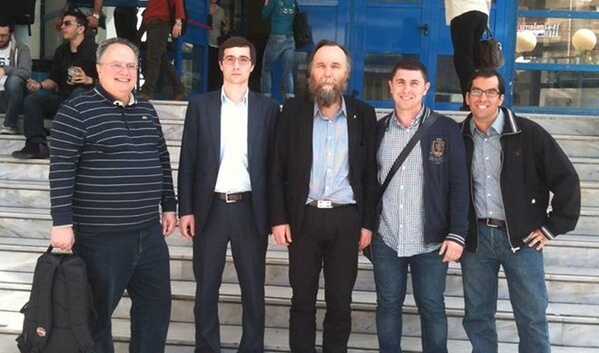 The scandalous photo was published by Swedish businessman Anders Östlund, residing in Kyiv, on his Twtitter.

Ex-professor of Lomonosov Moscow State University Aleksandr Dugin is well-known for his position towards Ukraine and its citizens: “Today’s Ukrainians are a race of degenerates that crawled up form sewage, Genocide is in order”.

On 6 May 2014, in an interview to Anna-News information agency, Dugin clearly expressed his attitude towards Ukrainians: “To kill, to kill, to kill. There’s nothing to discuss here. This is my professor’s opinion.”

Family photo of Nikos Kotzias and Aleksandr Dugin is even more ‘spicy’ in the light of recent claims of the new Greek government questioning further steps on imposing more sanctions on Russia. On 29 January, EU foreign ministers will gather to consider this issue, and Nikos Kotzias could block the decision, since it requires unanimity of all 28 members.

The contacts between Nikos Kotzias and radical ultra-right Aleksandr Dugin raise suspicions on what role Russia plays in Greek-EU relations.

Russia can have been unofficially promoting its ‘strategic values’ among Greek policy makers, which might affect the further Greek external policy, even lead to potential withdrawal from the EU. Greece may also refuse from paying back huge credits, thus being instructed by Russia’s ‘advisors’ to shatter the EU stability.

Thursday meeting will show where Greece stands, although it won’t change the fact of taking pictures with ideologue of Russia’s aggression in Ukraine.

*Ruscism (‘Russia’ + ‘fascism’) – name of political ideology and social practice of imperious regime in Russia in the beginning of XXI century, basing on the idea of ‘senior brother’, its ‘special civilization mission’, on totalitarianism and imperialism of Soviet character, using of Russian Orthodoxy as a moral doctrine, and on geopolitical instruments, first of all – energy resources (Ukrainian Wikipedia).