The “Kyiv-Frontline” Route: How volunteers’ humanitarian aid gets to Ukrainian soldiers 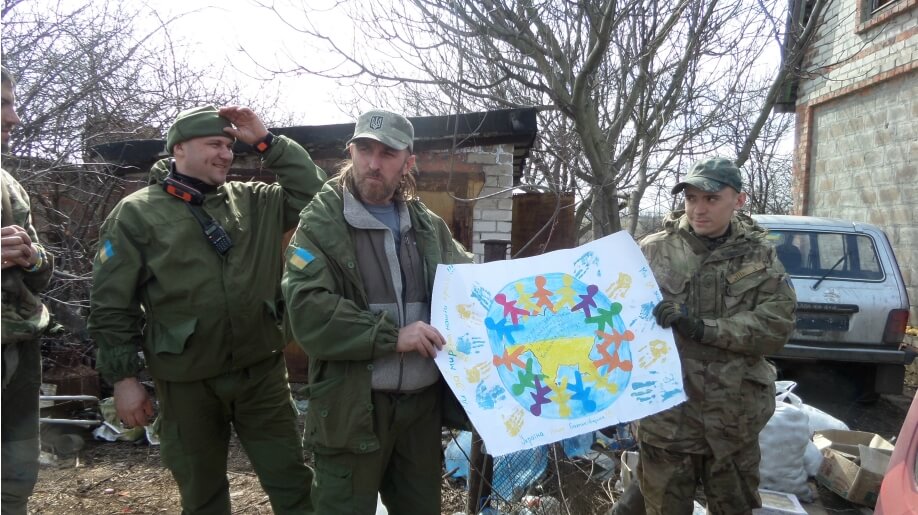 We have heard and read a lot about volunteers providing food, medical supplies, and other essentials for the Ukrainian soldiers at the front. At the same time the General Staff of the Armed Forces of Ukraine and government officials have claimed that the government is doing its job in supplying the soldiers with everything they need.

EMPR has decided to see for ourselves how things stand in regard to how well the soldiers in the battle zone in eastern Ukraine are being taken care of. In our search for the truth and to bring our readers a firsthand account our correspondent spent two days in the Donetsk Oblast with a volunteer group. We want to share with our readers the remarkable, unique system the volunteers have worked out to provide aid to the Ukrainian patriots  who with their strong spirit, desire for justice, and often with their lives are defending our land from the Russian invaders.

From the very beginning of the war when it became clear that the government was completely helpless in the face of aggression the people themselves began organizing aid centers for the Ukrainian army. This is where people come together to collect, organize, and pack things for the soldiers. Risking life and limb, they deliver the aid to the front. The author of these lines had the good luck to meet those great people and to accompany them on one of their delivery runs. Alexander and Maxim, both members of the Association of Afghanistan Veterans have been delivering the supplies to the front for many months. They gladly agreed to take me along. We are to meet near one of the aid centers, “Mothers’ Watch”, about which EMPR had reported earlier. It is evening in Kyiv. The aid has been packed and stacked and is ready to go. There is cereal, baked goods, dehydrated ingredients for soups and borshch, balaclavas, wet wipes…tomorrow it will all be delivered to the battalions. Alexander arrives. Everyone helps load the van. The excitement is contagious. After the goods have been loaded, after a cup of coffee for the road, and after a last cigarette we say goodbye to the volunteers at the center. “May God help you, guys! Good luck!” they say to us as we leave. Along the way we make a brief stop at a house and pick up more goods. On the outskirts of Kyiv another van full of volunteers and goods is waiting for us. This little caravan is on its way! A first stop at a gas station somewhere in the Poltava region. Huge bright stars twinkle at us from an incredibly clear sky. Two young guys walk out of the convenience store at the gas station. On the way to their car they notice us and our vans. They stop for a moment and approach us. They take the bags of candy and chocolate bars that they had just gotten and give them to us. “Take these, please, hand them out to the kids out there,” they say. My new friends thank them and don’t look at all surprised. “This happens all the time,” Alexander tells me. More cars stop to refuel. Inside are more volunteers, in camouflage gear. We chat with them. They are on their way to Luhansk.

We sip coffee and continue on our way. In the back seat Alexander tries to sleep squeezed in between bundles and boxes. Maxim is driving. He’s in a philosophical mood. We reminisce about the Maidan and wonder what the future holds for us and for our country.

The closer we get to our destination the more excited I become. Soon, very soon I will find myself in the place I had never seen but about which I have been writing every day for the past year. When will we get to the very first block post? The night passes very quickly. It is almost nine o’clock in the morning and here we are already, entering Donetsk Oblast. Out the window we see a dull landscape, clipped poplar trees, and mines. In this region of Ukraine even the most basic environmental standards had never been implemented and the land here looks tired, drained, practically exhausted. The air is stale. Dust irritates our nose and throat as it settles on our clothes and face. I touch my hair. It feels stiff. It’s hard to breathe. How can our men stand to be here for such a long time? Especially the men from western Ukraine, from the green Carpathian highlands with all that fresh, delicious air? After filling up with gas for the last time, after a last cup of coffee we are on the road again. Our next stop will be where our first battalion is stationed.

Finally we reach the first military checkpoint. This is the line between the two Ukraines: the Ukraine that is at peace and the Ukraine where war is being waged and people are dying.

Alexander steps on the gas: the separatists are inconsistent in their actions and like to ignore the officially proclaimed ceasefire. Snipers might be shooting here already. Strangely, I am not afraid, but inside me the tension is mounting. We must be especially careful here. Alexander gives instructions: “Do not buckle your seat belt here. If anything happens you will have just a few seconds to jump out of the car – you cannot afford to lose time trying to unbuckle. Fall to the ground next to the van, not into the ditch. The ditch could be mined.” Our route passes just a few hundred meters from the Donetsk airport. On the horizon columns of black smoke rise into the sky. My fellow travelers are discussing what might have happened.

“Could be. Maybe it was the work of our partisans?”

We turn onto a country road and through deep holes and potholes make our way to our first destination: a small village next to which the base of the 11th Mechanized Infantry Battalion is stationed. Dry earth, dilapidated buildings, green army tents, military equipment. A big, sand-colored truck is parked near the barracks and a few mechanics are tinkering about. Another truck, also green, is parked nearby. Its weirdly twisted cabin has been torn off. It was hit by a shell a few days ago. The truck is practically a bunch of scrap metal and in any other country it would have been scrapped already but the Ukrainian army has a critical shortage of equipment. That’s why the craftsmen of the 11th Battalion are going to do the impossible: they will fix the truck and the truck will keep serving them well and faithfully. I try to chat with the soldiers but these heroes of Ukraine are extremely modest and they tell me they don’t want to be interviewed or to talk on camera. The officers, though, agree to tell me about life at the front.

His name is Volodymyr but everyone calls him by his code name “Fierce.” He has been at the front three months already. His face is drawn with fatigue.

“Our country could be a leading country in Europe but for that to happen we need to get rid of all those old soviet values and morals. It’s unfortunate that part of our population still pines for the way life was under the Soviet Union and want to see a return to those times. In their propaganda Russia takes advantage of that. They say that back when we were part of the Soviet Union we had cheap goods and life was better. Empires are created and then they fall apart. Countries that are founded on the idea of nationhood live and thrive. That’s just what I think.” Like everyone in the military, “Fierce” thanks the volunteers for their selfless work.

“I wish the brightest, the best future for our children and grandchildren, the best in the world. I believe we will get there. Because look at what our people are capable of – it is they who have revitalized the army, it is thanks to the volunteers that the army has been able to stand up to the enemy. It is the volunteers who are still helping to fix and rebuild our military machinery; you are the ones who are equipping, dressing, and feeding us. It all comes from the goodness of people. So today’s army really is a people’s army. And attitudes – when I was wounded I saw so many people coming to my aid. It was never like this. I do think that what we are going through will ultimately forge a stronger people and a strong nation out of us. For sure! We seriously hope so.” Next I talk to Andrew, the captain of the battalion. He is full of strength and energy despite the fact that he had just returned from the front. Andrew joined the army as a volunteer. He was part of the Lion’s Sotnia on the Maidan. Out of that group eleven had volunteered to go to the front. He fought at Hora Karachun and over the summer he fought with the 11th Battalion in Debaltseve, Cherunkhino, Nikishino, and Fashchivka. He was deployed for the third time near the Donetsk airport. I ask him if the ceasefire is being complied with. He shrugs. “A ceasefire agreement had been reached along with an agreement to move the heavy equipment away from the front line. I can tell you that last night apart from the sniper attacks I was shot at from a tank and from an anti-tank installation which to tell you the truth I don’t think are allowed under the agreement. Those are very high caliber weapons and they are used against heavy equipment. Me and my buddies were shot at. Last night. And there were ten attacks.” Andrew admits that he does not believe Europe can help Ukraine stop Putin. “Europe won’t help us. Europe is afraid of Putin. All the more since the most powerful player in NATO is, of course, the United States. And the United States could help us. They could help us with weapons, and with decent uniforms for our soldiers who with superhuman effort are holding the lines in eastern Ukraine. I am an officer in the airborne division. I remember cutting out the first tank at the repair base in Kyiv at the time when Ukraine had signed off its nuclear arsenal in the presence of American officials. It was a slap in the face for everybody. It means that Russia really did profit from it and will continue to promote its interests and expand its territory. America doesn’t need that. America was forced into it. Now America must help us hold Russia back.” The guys have finished repairing the truck and are now decorating it with funny phrases. Andrew shows me a sample of their art. “The last time our unit was leaving Debaltseve and Chernukhino we were offered a truck. This is the kind of ancient equipment our young lads have to rely on to protect and defend the sovereignty of our great nation.” Andrew pants loudly as he pulls at the truck. “Why are you here, Andrew?” It is noon. We say good bye to the soldiers and promise to stop in on our way back to Kyiv. Our next destination is the Kremlin’s nemesis: the volunteer battalion “Right Sector.”

This story is also available in Russian.