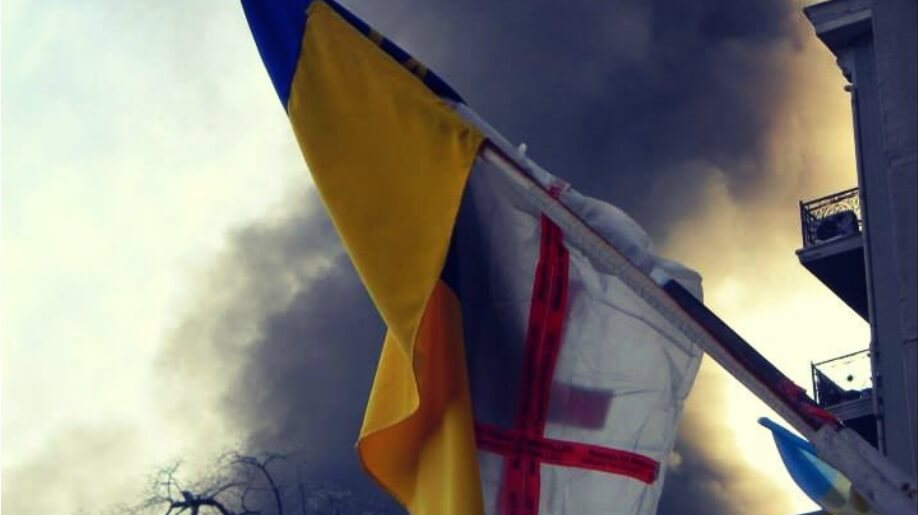 As the result of public initiative several medical aid centers were established during the Revolution of Dignity in Ukraine. There are parallels to this in Ukrainian history in the 1940’s when the Ukrainian Insurgent Army (UPA) and the underground opposition network received medical care and support from the Ukrainian Red Cross.

As she seeks to understand the unique phenomenon, Maria Fenchyn, a student at Lviv Medical University, sheds light on two instances where citizens organized and provided medical aid under dire and severe circumstances.

“On December 1st a million people had gathered in the center of Kyiv and it became clear that the Maidan was not going to disappear. Having lived through 2004 (the Orange Revolution; at that time 60 medical centers had been set up) we knew that with so many people medical attention would be indispensable at some point. Within an hour we were ready to provide medical aid and we let people know where the aid centers were,” said Oleh Musiy, coordinator of the medical services.

Qualified doctors with a variety of specialties, interns, medical students, registered nurses and nurse’s aides, physicians assistants, and ordinary people volunteered to serve in the medical services. Within two weeks individual medical centers were set up in many spots around the Maidan. Additional centers were set up as needed. A dispensary for pharmaceuticals and other supplies was established near the Maidan. During the peaceful phase of the protests people sought help at the medical centers for the common cold, pneumonia, pharyngitis, laryngitis, frostbite, cuts, burns, toothache, headache, exacerbation of chronic diseases, epileptic seizure, stroke, and hypertension. The most common injuries during the violent phase were grenade wounds in the lower extremities, bullet wounds, both penetrated and non-penetrated, head, chest, and abdomen injuries, a huge number of eye injuries, including from various gases, hands and fingers sliced off, traumatic brain injury, and bone dislocations and fractures. Ten mobile medical teams operated on a twenty-four/seven basis. There were always at least three doctors working full time at each medical center. Doctors worked in 12 hour shifts though they often worked much longer. Most of the medics, close to 80%, were from Kyiv and Lviv. Many surgical units had to be set up because suddenly weapons were brought in and used against the peaceful demonstrators. The emergency operating rooms adhered to medical protocol as much as possible.

A graduate of Danylo Halytskyi Medical University in Lviv, Uliana Bilous recalls, “The first casualty of the Maidan was Serhiy Nihoian. Most people were in a state of shock. They were overwrought. They were unaware of what was happening around them or what state they were in. They refused any help and kept repeating that they had to be there, their presence there, in the field of battle, was needed. In some cases they came in for treatment up to ten days after being injured. We would examine them and remove grenade fragments out of ripped and damaged tissue. And of course the most tragic and most difficult time, when even sleeping was impossible, was from February 18th thru February 22nd, 2014. The situation in surgery was more or less calm. We had plenty of ripped-tissue wounds from grenade fragments, usually in the lower limbs and buttocks, victims of concussion, shock, gas poisoning, etc. I personally did not see any bullet wounds in the medical center at St. Michael’s Cathedral. Possibly the victims never made it to our center since the injuries were usually fatal…”

Iaryna Kumanska, graduate of Danylo Halytskyi Medical University in Lviv recalls, “The lessons of the Maidan are many. It taught ordinary citizens to stick up for each other and for people in general; it taught us, doctors, how to administer emergency care to people with extremely varied pathological conditions. My advice: treat all your patients as selflessly and compassionately as the patients on the Maidan were treated.”

Iury Kruk, pediatric surgeon from Chervonohrad recalls, “The Maidan showed us a new model in interpersonal relations. Qualities such as mutual trust, mutual support, a willingness to sacrifice, a willingness to die for a friend or for your country. The Maidan has taught us decency, humanity, justice, and it gave all and each of us the opportunity to reveal our best qualities.”

The medical services of the UIA (UPA) practiced combat first aid for the first time in Volyn. The head of the Ukrainian Red Cross in Rivne was Leonid Stupnytskyi; in 1943 Kharytia Kononenko was appointed head.

Being taken to a Ukrainian state hospital was out of the question for the wounded soldiers of the UIA because informers from KGB headquarters were stationed in the hospitals. Even among the medical personnel there were informers. If a wounded UIA soldier were to end up in a state hospital it would mean that he was a prisoner of the KGB: he would be subjected to interrogation and torture, after which he would be convicted or killed, or, the most humiliating of all, he would become an informer for the KGB.
This is why surgeries on the wounded soldiers were performed in regular village houses, in forest huts, in underground shelters, or in the woods. They were usually performed in unsanitary conditions without proper lighting.

From the beginning of the underground opposition movement to its end it was the highly idealistic, resilient and courageous freedom fighters who happened to be doctors, medical students, physicians assistants, nurses, and uncertified doctors who were the solid foundation for the medical services of the UIA. In critical situations they often traded delicate medical instruments for heavy automatic weapons and became soldiers who often died in battle.

When necessary, the medical services of the UIA utilized local doctors who practiced medicine in that particular area. The injured and the sick were transported to clinics to be treated by the clinic physician and sometimes under cover of darkness to the home of a doctor. Occasionally the local doctors would drop by at the field hospital or whatever other sanitary facility the UIA had to check up on the injured soldiers. No one knew of their work aside from a small circle of trusted individuals. It is therefore difficult to make a full list of those doctors.

As a rule, the medical services of the UIA worked in Spartan conditions lacking surgical instruments, antiseptics, sterile bandages, bedding, sutures, medicines, and blood products. There was no sterilization equipment. They had no X-ray equipment, either, which is crucial for diagnostic purposes and in treatment.

The laws adopted by the international convention of the Red Cross of that time were not applied to the injured soldiers of the UIA. The UIA soldiers were incarcerated, tortured, and often executed on the spot.
It is worth noting the self sacrifice, the exceptional courage, and the devotion of the people who took it upon themselves to protect and shelter the wounded and the sick soldiers. The medical services personnel, too, were exceptionally brave and dedicated.

The experience of the UIA medical services, the Ukrainian Red Cross, and the medical services of the Maidan demonstrate that a well organized medical service is important not only for the medical aid that they provide and administer to the injured and the sick, but for their affect on public morale and the faith and confidence people feel when they are being safeguarded with proper medical care even in unconventional circumstances.

“It could be that in the future the way we conducted our battle might be criticized for all the victims who were sacrificed. But I have an answer for those critics: freedom and liberty are a treasure so precious that even the greatest sacrifice is not too much,” declares Mykhailo Diachenko