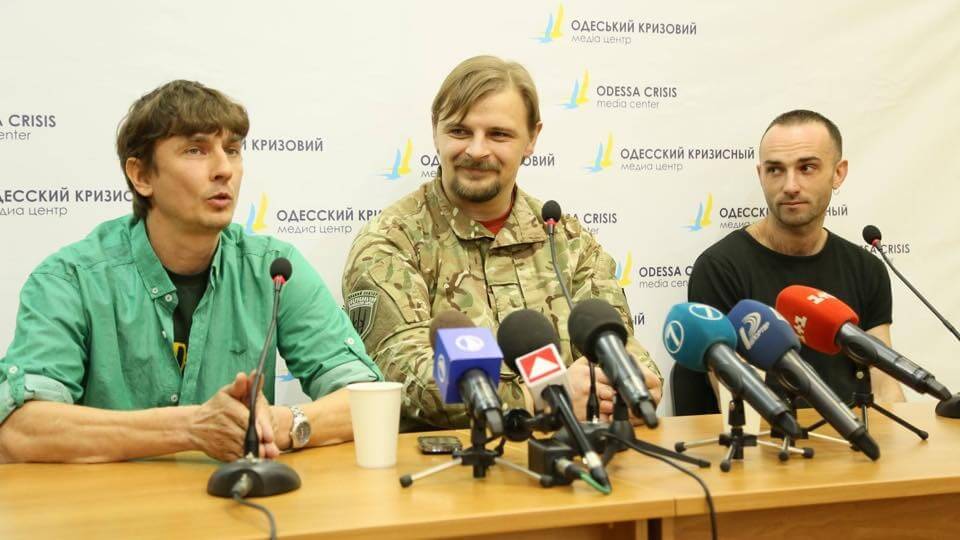 At pre-premiere screening, the film was presented by one of the directors Leonid Kanter, picture editor Yaroslav Popov and member of the Ukrainian Volunteer Corps, Donetsk Airport Cyborg Oleksiy “BYK”, who wrote the leading song to the film. The Ukrainians were warmly welcomed by Odesa residents, some of which had to seat on the stairs, because there were no free places.

“The film is about love and not about hatred; we came with love to fight for our Homeland. We wanted to show truth in response to Russian propaganda. But this film isn’t a counterpropaganda, because propaganda is hatred”, Leonid Kanter said at the briefing before the pre-screening. The documentary tells about Ukrainian Cyborgs defending the Donetsk Airport and saving lives of local residents in nearby village Piski. The film shows the real Right Sector, which Russian propaganda tries to make a monsters of. Those who believe in ‘fascists eating infants’ will be really surprised to see brave and open people, ready to help, discussing different philosophic and religious issues, people of strong spirit and great sense of humour. One will hardly find professional fighters there, but meet instead an actor, a scientist or a trainer, who decided to join the Volunteer Ukrainian Corps after learning his students were killed during the war.

The scenes of the film showing attack and defense operations in the Donetsk Airport were shot by Leonid Kanter, and life of Cyborgs and locals in Piski – the closest population centre to the airport under Ukrainian control – by Ivan Yasniy. This gives a unique opportunity for spectators to see one and the same event literally through the eyes of both those fighting directly at the front line in the airport and those covering their friends in Piski.

While being documentary by its nature, the film leaves an impression of a docudrama, this is a comprehensive story, making audience follow the paths of its main characters – real people, some of which unfortunately no longer walk the Earth.

The film is named The Ukrainians for foreign release, because it tells the world who real Ukrainians are. One of the film’s trailers is accompanied by sevral lines of legendary Rudyard Kipling’s If: “If you can keep your head when all about you, are losing theirs and blaming it on you… Or watch the things you gave your life to, broken, and stoop and build ’em up with worn-out tools… If you can dream—and not make dreams your master…you’ll be a Man, my son!” And this is what Ukrainians have learnt for the year passed.