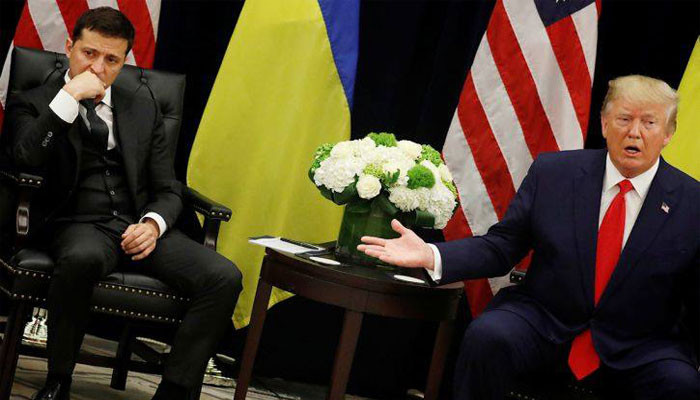 The season of hunting for power has already ended in Ukraine, but it is just beginning in the US.

Trump and Zelenskyy had a telephone conversation on July 25. Exactly two months later, on September 25, a scandal erupted.

The situation is as follows: almost three decades ago, several countries that are leaders of the democratic world persuaded Ukraine to abandon nuclear weapons. Among the democratic countries was non-democratic Russia, which posed as a democratic one. Ukraine was easily led into persuasion, believing that it would then be protected from all corners of the world and cherished in all corners of the world. Therefore, without looking, it signed a meaningless piece of paper that says – we will not attack, but says nothing about protection.

A couple of decades passed, and Russia, having changed its mind about being democratic, did attack. And those who had persuaded did not protect. Now that the war of Russia against Ukraine has been going on for five years, the free world leaders cannot decide who should help Ukraine and how much.

And the US got to the point that its president decided to use military assistance to Ukraine to blackmail the president of Ukraine: if you start an investigation against my rival Biden, I will defrost the help, no, even more, I will just give you a couple more Javelins. I think we will find a common language, so call immediately Attorney General Barr and Giuliani. Not a conversation, but a mafia-like shakedown. All that I told you is not my words; that was how Adam Schiff built his speech before reporters, including the “mafia-like shakedown”. He also said that during the previous elections President Trump used one country’s services, and now uses the services of another.

Now a few words about Biden, Trump’s rival. One fine day, Zlochevsky’s Burisma Company expanded the Board of Directors by engaging Kwasniewski and Biden’s son Hunter. Each month, about $ 160,000 dripped into the younger Biden’s account. In total, he received about $3.5 million. I think everyone understands why such people are engaged to the Board of Directors.

We will leave aside how Burisma received licenses and permits at the times of the ousted President Yanukovych, who has been lifted sanctions by the European Court, we will focus on how Burisma laundered money and why it needed patrons like Biden.

Is it not so that the accounts are not arrested and not frozen? For some reason, it seems to me that 3.5 million is nothing; their gratitude was calculated in more serious amounts.

But Biden’s collaboration with Burisma did not end there.

According to Oleksandr Onishchenko, in early March 2019, before Petro Poroshenko left, the first oil and gas auction was held in Ukraine with the option of participation of international companies.

Three oil and gas reserve blocks were sold. A block in Poltava region was sold to “Burisma”. Beneficiaries: Mykola Zlochevsky and Hunter Biden.

It is also worth reminding how Biden blackmailed Poroshenko by threatening to withhold a $ 1 billion loan guarantee unless Prosecutor General Shokin was removed from office.

Here are the portraits of two American presidential candidates. As the English say, I rest my case.”

And now let’s get down to President Zelenskyy, whom we have elected in the hope that he will “tell the truth,” according to the BBC correspondent in Kyiv.

The conversation is really disconcerting. It is a pity that Zelenskyy has inherited an inferiority complex from the previous Presidents of Ukraine. As I wrote before, those who had earned a bit came to power this spring. However, they earned by working for those who were stealing. So, continuity is inevitable.

The crisis of political party governance has reached its climax. Political parties can “supply” neither statesmen nor simply decent and competent people. People of no definite occupations, without morality but with ability to talk a blue streak have increasingly become politicians.

The political leadership of different countries has blessed the format of existence, when nations are forced to pay ever-increasing taxes, and the elite is exempt from taxes. Besides, an ordinary overtaxed citizen is forced to support about a dozen political parties, whose members cannot remember the last time they went to work.

In the 21st century, people are not dim-witted. They do not need any party leaders. So, there is no need for political intermediaries between the people and the state, just as there is no need for an intermediary between God and man. Both politicians and priests, committing crimes against people, law and faith, have for centuries glorified and supported each other, guaranteeing each other power over peoples.

I don’t know whether I will witness that wonderful moment when it becomes clear in the minds of the peoples; when they pry away from the series that are shown to them every day on the news channels and cease to live other people’s lives, as well as begin to live their own. When they take control of the countries in their hands, appointing professional governments with which they will communicate through referenda. It is impossible, after all, to endlessly watch how one very rich fraudster competes with another in the pursuit of power.