Home » Protests in Ukraine: what was off screen?

Protests in Ukraine: what was off screen? 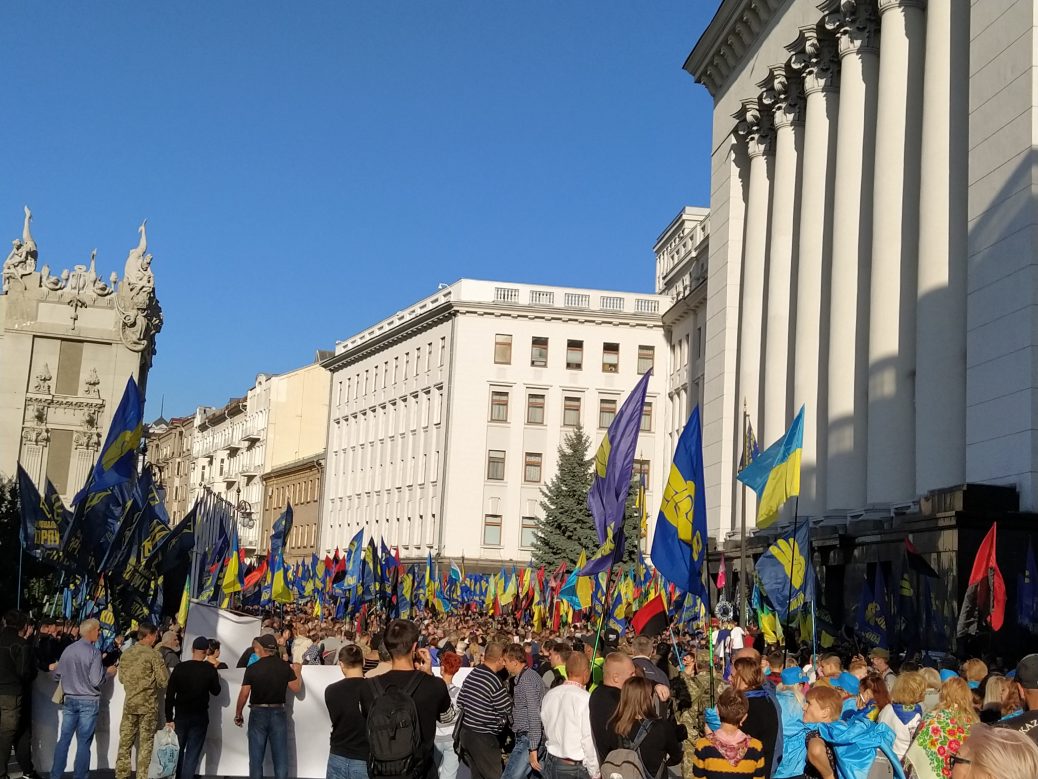 On October 14 Ukraine celebrated Defender’s Day, which was decreed in 2015 and originated from the Ukrainian Cossacks holiday, marking another decisive step away from Communist traditions of the USSR.

The newsfeed of all media are full of photos and videos from many public events, including protests, which took place in Ukraineon that day. A lot of beautiful pictures of children, families, smiling people in embroidered clothes and military uniforms. And also a lot of those that show how radical and incomprehensible the Ukrainians are: they are both tired of the war and don’t want peace.

What does their “no to capitulation”mean?

We’ll try to shed light on the most significant events and what may have remained off screen.

For example, there were three rallies in Kyiv: in the morning, in the afternoon and in the evening. They started at the monument to the Ukrainian classic and freedom fighter Taras Shevchenko, then moved to Bessarabska Square and through the legendary Independence Square and Heavenly Hundred Alley, where the Revolution of Dignity took place, to the end point: Presidential Administration of Ukraine.

The afternoon and evening events gathered about 100,000 people each.

This can be easily proved by the photos accessible on the Internet, no matter how hard the presidential administration insisted that the rallies were not mass and people were paid, which resulted in an explosion of cute memes in the Ukrainian social media.

The afternoon rally gathered a lot of people from the regions as could be seen from home-made posters and inscriptions on flags. However, there were also a lot people with the Svoboda party flags, which probably organized the arrival of people in Kyiv.

An important point was that along with posters against Ukraine’s surrender in the war, a lot more banners were against the opening of the land market in Ukraine. And the protests next to the Presidential Administration also focused on this issue, providing reasonable explanation why, in its present vulnerable situation, Ukraine in no event can sell land either to private owners, or, moreover, to corporations.

The star of the evening event on Independence Square was the Azov Regiment’s all-time leader Andriy Biletskyi, who is famous for his love of patriotic shows, and which the Russian media love to show as “evidence” of the Ukrainian radicalism.

Close to the Presidential Administration, the protesters built a wall of 145 bricks, with an inscription of a city or village liberated in the Russian-Ukrainian war on each of them. It is noteworthy that protests were also held in Donbas, especially near the frontline, which had not happened for a long time. People are asking not to leave them without the Ukrainian military – they are too familiar with the hypocritical nature of the Russian world.

Undoubtedly, the AZOV regiment played a decisive role in the liberation of Ukrainian territories in the east. Volunteers and patriots, honest and brave warriors, ordinary people far from political games (as in other large patriotic Ukrainian communities) serve in it. However, the funding of the Azov and its many training facilities is not transparent yet; Biletskyi’s life story and his sources of income are not clear either, and his ostentatious, theatrical radicalism is often harmful to Ukraine’s foreign policy.

Obviously, each of the 3 events was attended by different people. Who organized them and why did the Ukrainians not unite in a million-people rally? Probably, we will learn about this much later from someone’s memoirs, but the “divide and conquer” motto is so discernible.

It is also alarming that not a single media was surprised by the lack of President Volodymyr Zelenskyy’s response to such massive appeals of Ukrainians. He limited himself to posts on his resources about an inspecting trip to the Joint Forces Operation in Donbas, awarding the military on Defender of Ukraine Day, and about Ukraine’s sports victories that day. However, why be surprised? It is quite an ordinary Soviet attitude towards the population (what a word!).

We will end our report on October 14 in Kyiv with an exclusive video from Luteranska Street – the so to say backstage of events on Bankova Street, where the Presidential Administration of Ukraine is located: endless prisoner transport vehicles and patrol police cars, which are also a modern version of barred prisoner transport vehicles, on both sides of the street in the heart of historic Kyiv.

How scared the “servants of the people” (the name of the President’s party which is also the majority party in the Ukrainian Parliament) must be of their people, their fellow citizens who have come to explain their disagreement with the fact that the election promises are not fulfilled, and the country’s course in foreign policy has turned back to the totalitarian system, hiding behind empty, unrealistic promises of a peace agreement with the Moscow bloodthirsty madman.

Well, Avakov, the Minister of Internal Forces of Ukraine, took care of Zelenskyy’s security. But he did not take care of the basic human needs of his people: the historical Luteranska Street in the very center of Kyiv … smells bad (excuse me for naturalism).

And all the current government has brought a very, very bad smell to Kyiv, which can be hidden neither by external gloss, nor by acting skills, nor by the attractive promises of such atempting, but, alas, currently unrealistic, carefree life for Ukrainians.

And this smell can be recognized by everyone born in the USSR: this is the stink of homo sovieticus, whose chief representative still lives in the Kremlin and feels pretty well due to the conformist and not effective Western politics.