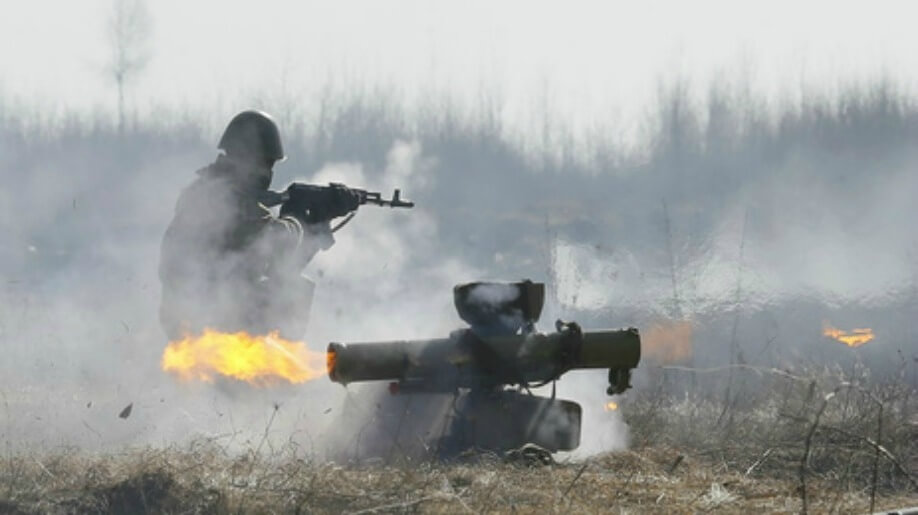 At the conclusion of the second round of the Minsk talks the heads of Ukraine, Germany, France, and Russia agreed to a ceasefire in eastern Ukraine. Officially the ceasefire was to be in force from February 15, 2015. In truth, the military offensive in the Donbas had never been brought to a halt. Read EMPR exclusive report from the front lines about an illusory truce.

According to official sources, as of April 2, 2025, 75 people were killed after the February 15th ceasefire was in effect and approximately 400 Ukrainian soldiers were wounded. According to the volunteer soldiers and the soldiers of the Ukrainian Armed Forces the losses are much greater. The official statistics do not take into account the deaths of those soldiers who are fighting in the volunteer battalions, and not all the deaths of the soldiers fighting in the Ukrainian Armed Forces are reported. The soldiers at the front call into question the way the so-called ceasefire is being portrayed in the media.

April, 2015. Ukraine celebrates Easter, one of the most important Christian holidays. In the meantime, in Donbas the circumstances are nerve-racking. Donbas. The Donetsk Oblast. A small village seven kilometers from Donetsk. This is where one of the units of the 93rd Mechanized Brigade is situated. The weather today is going wild with hail pounding the ground one minute and a beautiful clear sky pushing in the next minute, the burst of  bright sunlight bringing us cheer. The soldiers’ mood mirrors the weather. Today the volunteers from Kyiv brought the soldiers Easter bread and all kinds of goodies. It’s a real holiday for the guys. But even the holiday spirit cannot wipe away the memory of what happened here several days ago. Even though officially there is  a ceasefire, they lost a friend. He was killed in strange circumstances. One of the officers of the unit, Andriy, describes what happened. “We had a brief encounter here yesterday with grenades and small arms fire coming from a separatist unit. They surprised us with their attack from the rear. One of our block posts had let them through for some reason, I don’t know why. Either they got scared or they didn’t notice them. Whatever. We spotted them and reported the fact  to the senior officers after which we received an order to disarm the separatists or take them captive. Shots were fired and there was a short exchange of gunfire. It was obvious that they were professional, trained shooters. The separatists don’t shoot like that. There were two soldiers who killed our guys at three checkpoints, they killed a total of fifteen. And then they left calmly. We don’t have many professional soldiers here, we mostly have regular volunteers who don’t have combat experience, who want to protect Ukraine and are prepared to die for that. And they do.”

Viktor was one such volunteer. Viktor Humeniuk hailed from a small town in Kyiv Oblast. He signed up as a volunteer to defend his homeland leaving behind a pregnant wife and a young child. His second child, a daughter, was born when he was at the front already. Viktor’s comrade-in-arms, Serhiy, had witnessed his death. “Viktor was our medic. One of our guys had been shot. He was our first casualty. Viktor crawled over to the wounded lad to administer first aid. Viktor never made it. A grenade killed him. There are so few people like Viktor, so very few. He was the only one who would throw himself into the line of fire to help a friend. Do you understand that? The only one.” A soldier sitting next to Serhiy could not hold back tears. For him Viktor’s death was especially hard: he was with Viktor when Viktor died. Over and above the unbearable grief he feels, the sense of shame and guilt he carries weighs heavily: “Why is it that even under fire Viktor reacted professionally and compassionately and crawled over to help a friend, and I didn’t? Why didn’t I help him?”

At the very start of the armed conflict in eastern Ukraine volunteer battalions began forming one after another. It was much harder to fight in a volunteer battalion than it was in the army, but it was much more prestigious. Young, inexperienced men joined the battalions, as did experienced officers who often made better and smarter decisions than the General Staff of the Ukrainian Armed Forces. Since they were not officially a part of the Ministry of Defense they could ignore the often stupid and senseless orders the generals gave and thus avoided unnecessary losses. The majority of the fighters joined the battalions to fight for their homeland completely selflessly without any kind of payment. In fact they and their families did not qualify for any benefits and the struggle for the right to receive military benefits and even to be recognized as persons who fought in a war was long and difficult. And strange as it may seem the government bureaucrats treated these patriots with great suspicion. Self-sufficient, independent, organized and patriotic citizens of Ukraine posed a threat to those in power, those on top. And for many months the volunteer battalions were subjected to the worst kind of harassment: they were accused of looting and murdering civilians, of drinking and stealing…

In the end, unable to withstand the pressure and frustrated with not being given a clear status, the battalions agreed to be subordinate to the Ministry of Defense and/or the Ministry of the Interior. The Right Sector and the OUN Battalion preserved their autonomy the longest. Sadly, on the eve before Easter the supreme command of the Ukrainian Armed Forces took dubious measures: right in front of Donetsk airport units of the Ukrainian army surrounded the fighters of the two independent battalions who had fought for many months and kept their positions in the small village of Pisky, and demanded that the battalions submit to the Ministry of Defense or leave the battle zone. How could the military agree to surround their own brothers in arms with whom they had fought for so long in defense of their country? What a wonderful opportunity they were handing the Russians: to launch an all out propaganda campaign: “The Ukrainian army and the volunteer units are fighting each other.” Luckily the Right Sector and the OUN Battalion did not fall for the provocation and agreed to concede to the government. Immediately after that the separatists went on the offensive around Pisky.

A massive assault on the Ukrainian army positions began two days before Easter. On the evening of April 10th Colonel Andriy Lysenko, spokesman for the ATO forces, announced that the separatist forces had brought heavy weaponry that is prohibited under the Minsk Agreement into the area around Donetsk and Mariupol. “The separatist forces have carried out 15 attacks on the positions of the Ukrainian army using 120mm mortars and three attacks using 122mm guns. Tank fire was used as well. Most of the ceasefire violations were observed in Avdiivka, Opytne, Vodiane, Pisky, and in the vicinity of the Putylovska mine.”

The question remains: how many more soldiers and civilians have to die in Ukraine before the Ukrainian and Western politicians start calling things what they are and admit that the negotiations with the terrorist state have failed to bring peace and are making it easy for the aggressor to wage an even bigger war?

Original version in Russian is available on empr.media/ru