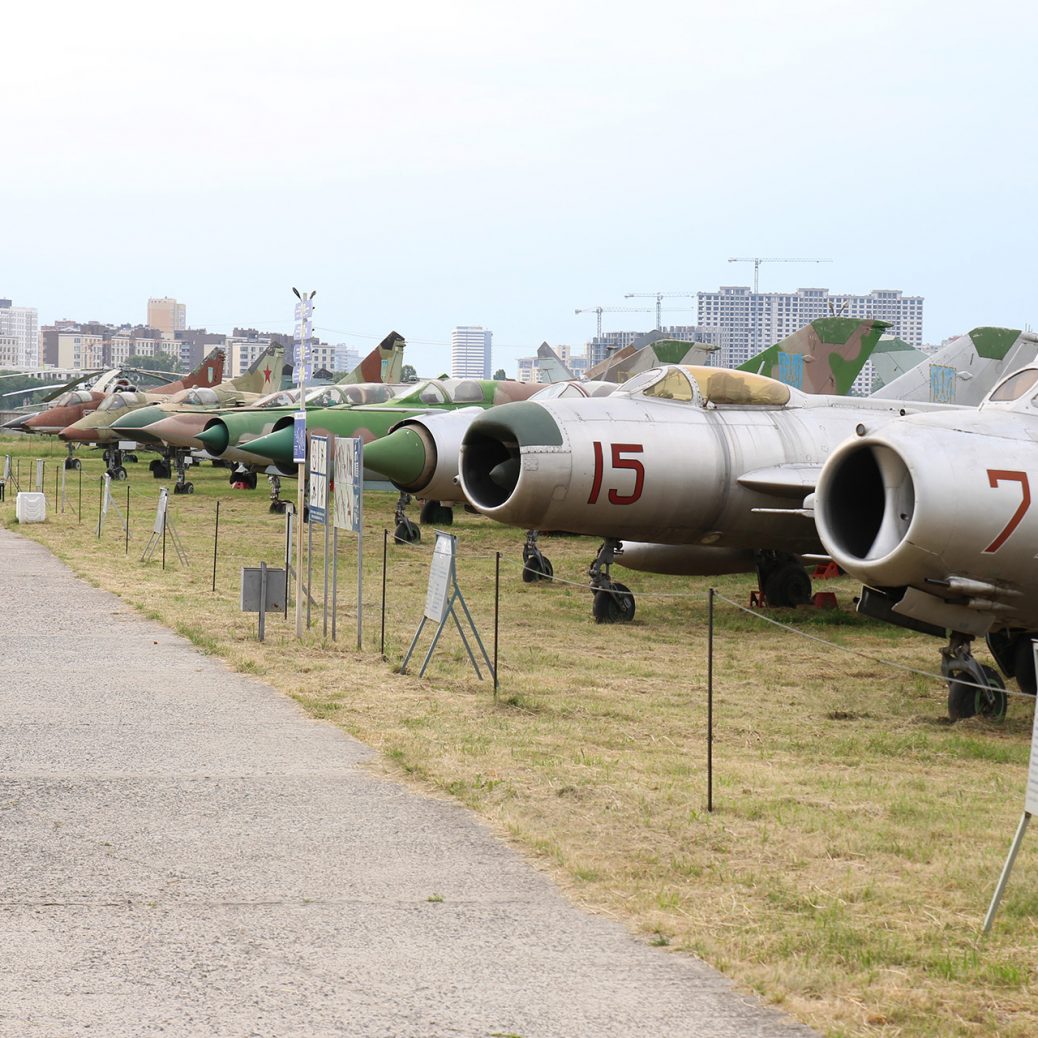 Will the once record-beating Ukrainian aviation ever revive?

For years, the Ukrainian state museum of aviation hasn’t left the list of the best aviation museums in the world. Just recently, in the year of 2018, CNN has included it in the TOP 20 aviation museums list.

Since the year of 2003, with the support of the National Aviation University (NAU), the Kyiv airplane exhibition can be found on the site of the former training base of the university itself. The grand opening ceremony was attended by the second President of Ukraine- Leonid Kuchma, thus emphasizing the significance of the museum and the overall importance of Ukraine for the entire post- Soviet aviation industry.

As of today, the museum consists of over 90 exhibits, three times more than at the day of its opening. The Ukrainian aviation museum is home to numerous helicopters, passenger and government planes, fighters, legendary long-range bombers, amphibians and hunters for American submarines.

Those who come here in order to attend an excursion, are right away welcomed in a patriotic upbeat manner.

The main message: without Ukraine, its engines, combat missiles, without the Antonov State Enterprise and various research institutes, the aviation of the entire USSR would not have taken place. Especially- passenger and transport divisions.

Unlike many other combat- related museums, it seems that the aviation museum does not suffer the nostalgic cry for the past. Full of optimism, they believe that Ukraine still has a potential for a bright future in aviation.
“These days the media lacks positive emotions”, says Valery Romanenko, one of the founders of the museum and its leading researcher.

“We are taking care of what we once had. This is the basis for new engineers to replace the old Ukrainian aviators.”

Looking like a professor, bearing a neatly trimmed mustache and snowhite hair, Valery

Valeriy Romanenko walks his way through the isles of decommissioned aircrafts. His main passion in life- aviation.

From the early age of 10 Romanenko collected plastic aircraft models, later on he graduated from the Shevchenko University, and ended up working with radio systems of air defense forces. Under the roaring airplane engines, Romanenko leads excursion groups, humorously noting “Look at this business jet up in the air. One of our oligarchs, most likely Medvenchuk. He has a similar one.”

No doubt, Valery Romanenko is a patriot. The first exhibit he shows is a model of a biplane, the existence of which the vast majority of visitors do not know about.

“This is the first Ukrainian serial aircraft,” says the guide, expecting the audience to be as surprised as they are. “This is Anatra Anasal.”

This classic biplane was produced in Odessa more than a hundred years ago. The aircraft plant was owned by an industrialist and banker Arthur Anatra from a merchant family of Italian descent.

Anatra Anasal was flown on July 25, 1916. It was a reconnaissance plane from which you could drop small bombs and shoot a machine gun.

“It is unique because it is the first and last fighter aircraft created in Ukraine,” Romanenko smiles. “Anatra Anasal- a typical two-seater aircraft during the First World War”.

The main influence of its construction was the German Albatros.

According to Romanenko, if you look back at history, you can notice that Ukraine- made aircrafts have always been in substantial demand.

“For example, the K-5, which was built in Kharkov (late 20’s – early 30’s), was the most demanded civil aircraft during the USSR period before the Second World War.”

“When the Austrians captured Odessa, just as any decent people would do, they ordered this plane” Romanenko notes. “They didn’t take it as a trophy. They paid money.”

“When guests from Eastern Europe and Austria come to us, I say: “All your first-generation pilots studied on a Ukrainian airplane,” Romanenko smiles with satisfaction.

MiGs and Kyiv missiles. “Like a tram on rails”

The Aviation Museum beholds almost all types of military, civilian aircraft and helicopters that flew in Ukraine after World War II. Valery Romanenko can dedicate a separate lecture to each one of them.

In the process of creating MiGs in the USSR, Ukrainian specialists played an important role, they constructed missiles, and the initial MiGs themselves. The first full-fledged post-war fighter of the USSR was the MiG-15 (“Fagot”) – the most massive jet fighter aircraft in the history of aviation. It was used during the Asian, African, and Eastern conflicts under various flags.

“It combines all the best of the best- German aerodynamics, British engines and powerful Soviet weapons,” says Romanenko. “Two guns – 23 mm each. One missile could destroy any fighter aircraft of that time.”

Years of trying to overcome the biggest problem with MiGs – low hit probability, lead scientists to creating the “second generation” aircraft- MiG21. In the 60s’, MiG21 became the symbol of the USSR. Although initially it was designed to protect the skies of socialist countries from the aggressive NATO bloc, nowadays it is used only in NATO countries to protect the sky from their aggressive opponent – Russia. The final, “fourth generation” MiGs are assembled in Kyiv, and can reach an astonishing speed of 2.5 thousand km per hour.

“It is the main rival of the American F-16. Its missiles are also made in Kyiv. They can already fly for a 120 kilometer distance.” Currently, the MiG-29 is the most numerous combat aircraft in the Armed Forces of Ukraine.

Not only did Ukraine produce aircraft, engines and missiles in mass amounts, but it also had all the best that was there to offer in the Soviet arsenal. Mighty reminders of the once powerful aviation are the majestic heavy bombers Tu22, which can no longer see the skyline.

The second series – Tu22-M2, was a massively produced powerful bomber, and till this day in Russia there are about 40 aircrafts of such kind aimed at the United States.

When asked if Ukraine needs the strategic bombers it lost today, the leading researcher at the Aviation Museum Romanenko’s answer is “No. Not at all.”

Strategic aviation is a part of the so-called “nuclear triad” alongside intercontinental missiles and warheads. All three components of the triad are located in the United States and Russia. But even Russia is reducing the number of its long-range bombers due to how vulnerable to modern air defense they are.

“No worries. We will get to Moscow on a Su24,” Romanenko reassures, and shows, according to him, the most well known aircraft in the Air Force of Ukraine. However, it has long become a museum piece.

Eventually, Romanenko shows the magnificent Tu-142-M3 the last in a series of strategic aviation of the museum. The world’s largest anti-submarine aircraft with a range of 11,500 kilometers.

Board No1 without gold toilets

One of the bonuses of the Aviation Museum is the ability to explore the inside of some vehicles.

One of them is the Mi-26, the most powerful and largest helicopter in the world. With engines originally from Zaporozhye.

Mi-26 is capable of transporting 20 tons of cargo or 90 fully armed soldiers. No other helicopter can compete.

“Now they are still flying in Russia, India, China… In Ukraine they are in reserve” states Valery Romanenko.

Among the most intriguing exhibits is the presidential board Tu-134A-3. It was written off in 2012 and replaced with a new Airbus A31 by the order of Yanukovych.

When climbing onto the ladder of this plane, museum visitors expect to see phenomenal interior, yet are greeted with a modest picture by modern standards. The airplane does not surprisingly have a golden toilet, notes the tour guide with a slight laughter.

Walking through the museum, Valery Romanenko emphasizes: “We are one of the eight aviation countries in the world. Ukraine was the creator of civil aviation in the USSR. And transport aircrafts today successfully fulfill the orders from NATO countries.”

Samples of “An” are the core of the Aviation Museum. It begins with a world legend- An-2, Antonov’s first aircraft, which is nicknamed “corn” or “Annushka”.

So far this aircraft operates successfully in many countries around the world, especially in China. It was used in all civil aviation schools. All pilots started with this machine.

There is a future. There is no passion in youth

Romanenko is a moderate optimist. He is convinced that independence has not put an end to Ukrainian aviation.

“If you fantasize, in many years, say, in 50, will there be exhibits of new Ukrainian planes in this museum?” the journalists wonder.

“No,” he answers. “I don’t think that new planes will bake like pies.”

“I dream that we will once again occupy our niche in the world of aircraft construction. So far, we focus on heavy and medium air transportation. But have lost the passenger sector.”

“In three years, not a single airplane has been built. Antonovs have capabilities but they have no concept. There’s an old team. It is like in our museum. People are experienced, professional, but there is no passionate youth.”