Home » Mikheil Saakashvili has been detained and imprisoned in Kyiv

Mikheil Saakashvili has been detained and imprisoned in Kyiv 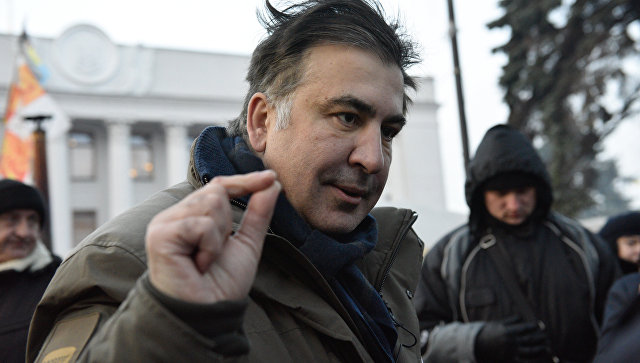 BREAKING Former president of Georgia Mikheil Saakashvili has been detained and imprisoned this everning in Kyiv.

Mikheil Saakashvili has been detained and imprisoned. Attorney General of Ukraine Yuriy Lutsenko informed about this on his Facebook page.

He was brought to SBU office on Askoldov lane 3A, which is currently surrounded by many National Guard staff. This palce is located about one mile from protester’s camp at the Verkhovna Rada of Ukraine.

Mikheil Saakashvili allies calling people to come out in support.

Meanwhile, MP and former volunteer battalion Donbas Semen Semenchenko writes on his Facebook page: “Information about the assault on the camp near the Verkhovna Rada is not true. Mikheil Saakashvili was detained not in the camp. As far as I know, this happened in the apartment of one of the Movement of the New Forces’ supporters. The assistance of Verkhovna Rada camp is no longer needed. Everything is fine here. People gather near Security Service of Ukraine office in Kyiv at Askolds lane 3 (metro Arsenalna)”.

In the meantimes, about 600 law enforcement have been seen around the protest camp in the central Kyiv. Protesters do not exclude potential dispersal of the camp.

According to the Ukrainian law and procedures precautionary measure for the time of the investigation should be determined for Saakashvilli during 72 hours after his detention, Minister of Internal Affairs advisor and MP Anton Gerashchenko says.

Earlier, the representative of the Prosecutor General Yuriy Lutsenko, Larysa Sargan, reported that Saakashvili was suspected in committing crimes ubder the following articles of the Criminal Code of Ukraine: Part 1 under the Article 15 (attempt to commit a crime), Part 2 under the Article 28 (committing a crime by a group of individuals, by prior agreement, organized by the group or a criminal organization), and Part 2 of the Article 256 (Assistance to the members of criminal organizations and the enclosure of their criminal activity).

From the legal point of view, Mikheil Saakashvili’s arrest is questionable.

The lawyer Ruslan Chernolutsky noted that during the detention of Saakashvili they “recorded six gross violations” and they will be provided as evidence in a court hearing while the election of a preventive measure policy for Mikheil Saakashvilli.

His lawers also mentioned, that Saakashvilli’s wife, Sandra Roelofs, is supposed to be the main speaker and public representative during a court hearing.

He also made a statement saying: “current authority arresteted him with false accusations. So they want to intimidate you”.

Mikheil #Saakashvili made a statement: “…current authority arrested me with false accusations. So they want to intimidate you. Do not be afraid. Feel free to attend a peaceful Sunday’s rally “For impeachment”. Together we will protect #Ukraine from corruption and violence”|EMPR pic.twitter.com/7Vp5f4skRO

Watch the latest live streems from the SBU office: