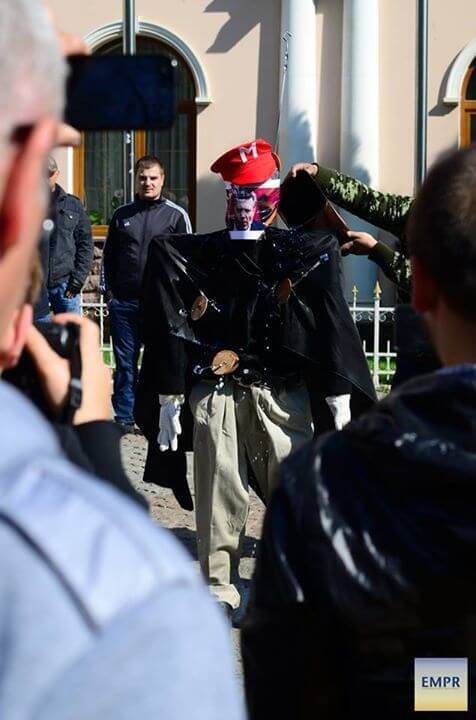 Odessa is well known for its peculiar sense of humor. Odessa residents have their own humourist approach to dealing with the existing problems.

Today Odessa Automaidan activists gathered near Odessa National Law Academy to burn down a dummy of its odious honorary rector (and de facto its owner) Serhiy Kivalov. Activists believe, Kivalov is an embodiment of the corrupted judicial system in Ukraine. After the dummy had been burnt down, activists brought a grave-stone depicting a person ‘strangely resembling Kivalov’, as activists said. The stone was engraved with the words: ‘R.I.P., corruption, we remember, but don’t love you and don’t mourn – people of Ukraine’.Odessa residents laid down flowers to the grave-stone and had the pictures taken with it. The Burn Bucket Challange was handed over to Nestor Shufrich and Vladimir Putin. The grave-stone will be taken to Odessa museum of corruption.

During the action, Odessa residents could also leave messages for Mr. Kivalov. “Kivalov, go to your Russia’ – one of the men wrote, as Kivalov is well-known for his pro-Russian views and support of Yanukovych. At the end of the performance, activists were approached by the Academy students, who first complained about the action, and then asked not to associate them with Kivalov. The students told they were pro-Ukrainian and had been raising money to support Ukrainian army by selling stickers ‘I help Ukrainian army’. Odessa activists gladly bought the stickers. By Aleksandra Demskaya for EMPR