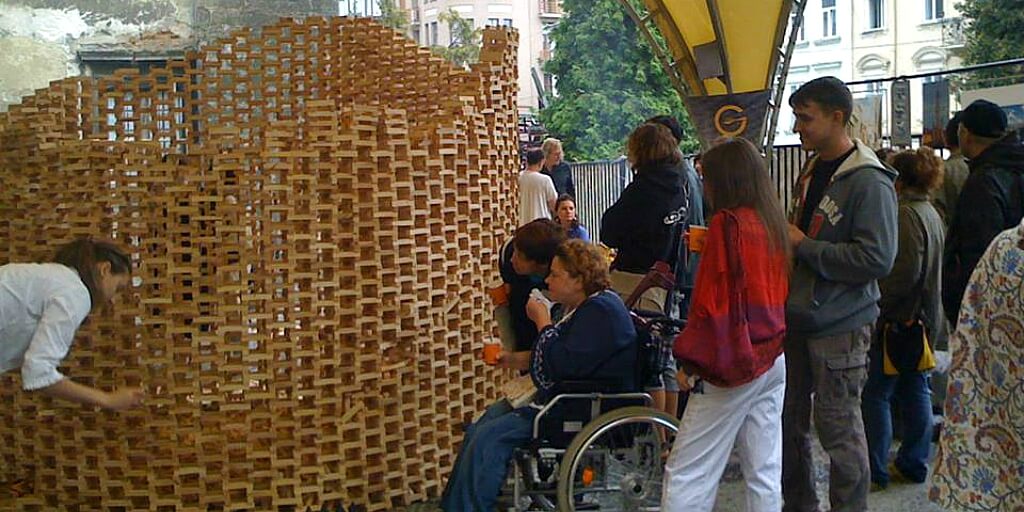 On 5 September men and women of crafts – internally displaced persons from Crimea, eastern Ukraine and Lviv natives presented their works at the “IDP and Leopolitans Festival in Lviv”.

The event scheduled in the open air on 45 Lesya Ukrainka street – outside the backdoor of Lviv’s famous artistic hub Dzyga had to move due to the rain. Small tented courtyard on 18 Valova street next to the Arsenal happily hosted the improvised artistic market. First thing that the visitors noticed when entering the place was the Black Tulip artistic installation in progress presented as part of the Eastern Partnership Culture Congress that Lviv hosted on 3-6 September. Dozens of black flowers made from paper in origami technique were being put on wooden sticks and placed in the line. According to the artists the installation bears the same name as the volunteer group that is bringing remains of fallen servicemen from ATO and symbolizes the losses that Ukraine’s people have incurred. Artists note that the white part of tulips seen when the flowers open up stand as a sign of hope.

Moving further one approached a series of stalls placed in circle. At one of them a Crimean Tatar craftswoman presented hand-made pieces embroidered with the traditional Crimean Tatar technique – Tatarishlime. This type of embroidery is made with two needles and a thread that imitates golden texture. Hand-made woolen puppets and henna body art were offered at other stalls. “Alternatyvna Kava” (Alternative Coffee) Lviv-based coffee shop was brewing coffee with non-traditional methods including brewing in a siphon and cold brewing. Local female musical duo Olenky performed in a tiny zone equipped as a stage.

“This is the eighth year that we organize the festival,” said the festival’s organizer Halil Halilov. “Events like this help better integrate the people. Cultural bridges work best, we unite through culture. We noted the positive attitude of the people of Lviv towards the IDPs from Crimea and eastern Ukraine,” he concluded.