Abyss calling to abyss: Modern Russian elite rejected the idea of ”conscience” or its existence 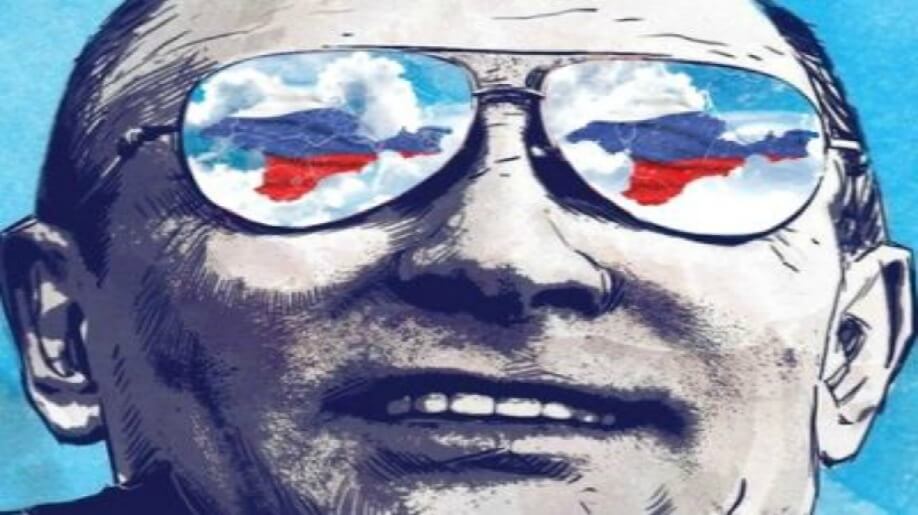 One of the worst things the Ukrainian government could do in resisting Russian aggression is to try to copy the a-moral methods the Russian regime utilizes. If Ukraine were to try that Ukraine could end up with a regime and a society just like Russia has.


EMPR presents deep analysis for our english-speaking audience prepared by Russian citizen Elizaveta Pokrovskaya for kasparov.ru. Every word worth your attention.

Several days ago a text appeared on A. Illarionov’s blog, which, as I see it, opens up fundamentally new approaches to studying and analyzing the political and social processes taking place in today’s Russia. The text is exceptionally important, and, I would venture to say, a breakthrough in that it deciphers the essence of Russia’s current regime and the regime’s strategic objectives in regard to Russian society. It fully substantiates the feeling that has been on the rise recently: the Russian regime is transforming itself in front of our eyes as it turns to creating a “virtual reality,” shaping the social processes along the way. We are witnessing the insertion of a new method of manipulating public opinion.

An unprecedented phenomenon was the screening of a film about the annexation of Crimea. Done essentially as a kind of “laboratory experiment” to produce a strong effect on a mass audience it was also a calculated step in achieving the ultimate goal of constructing an absolutely a-moral society. I deliberately write the word with a hyphen inasmuch as we are not talking about amorality (immorality) as contempt for the universally accepted norms of morality but rather about a complete absence of any moral, ethical and behavioral standards in a society. I am talking about reaching a point at which a society is left with no clue as to “what is good and what is evil,” where those ideas ultimately cease to exist either as concepts or as things to be destroyed or denied. Let us consider the deeper implications here.

In traditional human societies there are well-defined, clearly described notions about what is good and what is evil and about accepted, decent behavior versus behavior that deserves censure and punishment. Through most of human history it has been an accepted wisdom that moral and ethical standards are a necessary foundation for a society. That was what made the existence of a society possible no matter how a particular society was organized. Various cultures adopted various moral and ethical notions; they changed over time, but their presence has always been critical: they have been an integral part of every human society. A violation of those norms, even on a mass scale, even in a crude form has never led to the abolition of the norms themselves.

The claim that a-morality (the absence of morality) was endorsed and encouraged by such renowned political philosophers as Machiavelli and political activists like Talleyrand and Bismarck, not to mention the more famous leaders of totalitarian regimes (Hitler, Stalin, Pol Pot, Mao and others), does not hold true upon closer scrutiny. Out of that group Machiavelli, of course, stands out because he actually states in his famous treatise “The Emperor” that atrocities and cruelty are acceptable as a means to gain and hold power and authority. Machiavelli even states that it is acceptable to lie to the public because it is more important to be feared than to be loved. He advises the emperor to demonstrate personal valor and wisdom and to avoid frivolity, inconstancy and tenderness. All of the above mentioned qualities, both negative and positive, appear as moral categories – relative categories of appraisal manifested differently in different societies. Once the concepts of “atrocity” and “cruelty” exist it stands to reason that moral criteria by which actions are judged exist as well. The hypothetical “Emperor” knew just as well as his subjects knew what was meant by “valor” and “cowardice.” And exactly which of those qualities was seen as “good” and which was seen as “bad.”

Everything that has been said about Machiavelli fully applies to other political philosophers and to all human societies and cultures. Even the most totalitarian and the bloodiest political regimes, be they Stalin’s socialism, Hitler’s national-socialism, or Pol Pot’s Khmer Rouge regime did not eliminate “general morality.” After the “old” models of morality were destroyed efforts were always made to replace them with new ones: “bourgeois” morality was replaced with “a moral code for building communism,” “Judeo-Christian” morality was replaced with “Aryan” morality, etc. The new models that were offered were horribly ugly, distorted, and misanthropic models. One way or another, though, they served as ethical models. People have always been told “what is good and what is evil” inasmuch as that has always been one of the most important tools for social control.

When Hitler spoke of “liberating people from the burdensome constraints of rationality, from the humiliating, invented monster known as conscience and morality, and from the notion that one is entitled to freedom and personal independence under which few are capable of living” (The Voice of Destruction: Hitler Speaks, 1934) he had in mind that the old, irrelevant ideas of national-socialism were being replaced with new ideas and a new morality. The idea of personal independence clashed with the idea of “serving the Aryan nation;” the idea of individual virtues was at odds with the idea of German racial superiority, and the idea of personal benefit (like in most totalitarian regimes) did not exactly agree with the idea of improving society.

Is this what is taking place in today’s Russia, a kind of reshuffling of values? We are watching the very concept of morality being eliminated. All ideas about morality are being thoroughly and effectively destroyed. The behavior of the privileged class as well as every action taken by the elites in Russia reflect where and how the society is heading far better than do words in any kind of official verbal communication (today’s Russian government does not care about ideology in general and about slogans in particular). And those deeds and exploits of the elites and the privileged are meant to provide examples as to what kind of behavior is to be encouraged and what is to be severely punished.

It looks like the modern Russian elite and the social strata closest to them have chosen to incorporate the concept of a-morality in its most literal sense: they have rejected the idea of conscience or its existence. There are so many examples of this that it makes no sense to bring them up: from being a phenomenon on an individual level it has progressed to being a phenomenon on a grand scale. The fact that the Russian Orthodox Church has long ago stopped pretending to be a spiritually nourishing body to its flock and has openly become a department of the soviet regime that facilitates and contributes to the spread of that a-moral trend in society exacerbates the situation. But that is a whole separate topic.

Here it makes sense to focus on one important detail: the efforts to equate a-morality with that which relatively speaking can be called “evil.” It’s the same as equating the emptiness around us that is full of air with the (almost) absolute vacuum in outer space. Both can be defined as a void especially since superficially there is no difference between them. But the difference will become glaringly obvious if one were to try to take a breath in outer space.

This is exactly the road the Russian elite has now taken, utilizing the media that is subordinate to them and the army of agents employed to work in social media networks: the road to creating a moral vacuum, a course to completely destroy any moral and ethical direction, a path that will bring a society to a place where notions of good and evil are totally absent. In fairness it should be noted that the process has been ongoing for a long time already. But over the past year between the onslaught of disinformation and the lies that in fact have become the very foundation of the society, the speed and force with which the process is advancing makes me think of an avalanche. And the events of the past few weeks, from the shocking planned murder of Boris Nemtsov to Putin’s deliberately dramatic “pause” after that, and the screening of the film “About Crimea” in which the absence of any universal and time-honored moral compass was blatantly obvious can, I think, be regarded as a departure to a new level of “desensitizing” society with respect to any moral problems and issues.

In psychology and psychiatry desensitization therapy is used to alleviate human sensitivities to certain stimuli. It is a well-studied and frequently applied treatment used to reprogram the sufferer to be able to overcome fear. Today we see a similar treatment being applied to a whole society. Every effort is being made to make sure that Russian society will stop reacting to what still yesterday was considered to be moral or immoral (at least it had been labeled as such). To erase from social discourse the idea that human actions can be evaluated from a moral position and can elicit a moral evaluation.

Is it possible to counteract this phenomenon? And if yes, then how? It is not surprising that resisting something unfamiliar causes consternation. Indeed, how should an opponent known to be a-moral be taken on? How should forces that besides being completely ignorant of what is “good” and what is “evil” and also actively reject the existence of such categories anywhere in the world, how should they be resisted? And is it right to use a-moral methods to fight an a-moral regime?

One of the worst things the Ukrainian government could do in resisting Russian aggression is to try to copy the a-moral methods the Russian regime utilizes. If Ukraine were to try that Ukraine could end up with a regime and a society just like Russia has.

Of course this does not mean that resistance to an a-moral aggressor should be limited to a peaceful kind of resistance and/or to exercising the spirit. It means that the opposing action should not be an action “just to get even.” It is imperative to oppose the aggressor with organized, conscious, powerful resistance, the most powerful possible in order to ensure security for the country and its society.

But even more important is the struggle on the front of moral opposition. The lies of the enemy must be countered first and foremost with an uncompromising policy of transparency and truthfulness in all government bodies and all persons holding public office except where national security is at stake. Lies cannot be used to eradicate lies. Ukrainians have already seen this in their own experience and what’s more, they have already acquired a wealth of wisdom and know-how in exposing false information and in crushing Putin’s propaganda. Experience has shown that this approach works. It is therefore logical to assume that in other similar situations it is wise to do what has successfully been done before.

But most of all it is vital and urgent to pose clear and well-formulated moral principles and unambiguous representations of “what is good and what is evil” to counter the a-moral opponent who denies any and all notions of good and evil. Even just trying to compete with an a-moral opponent by following his a-moral rules would signify the end and the fall into the abyss.

Original article in russian language is available on kasparov.ru