Home » Donetsk Airport: Who needs a Stalingrad in eastern Ukraine?

Donetsk Airport: Who needs a Stalingrad in eastern Ukraine? 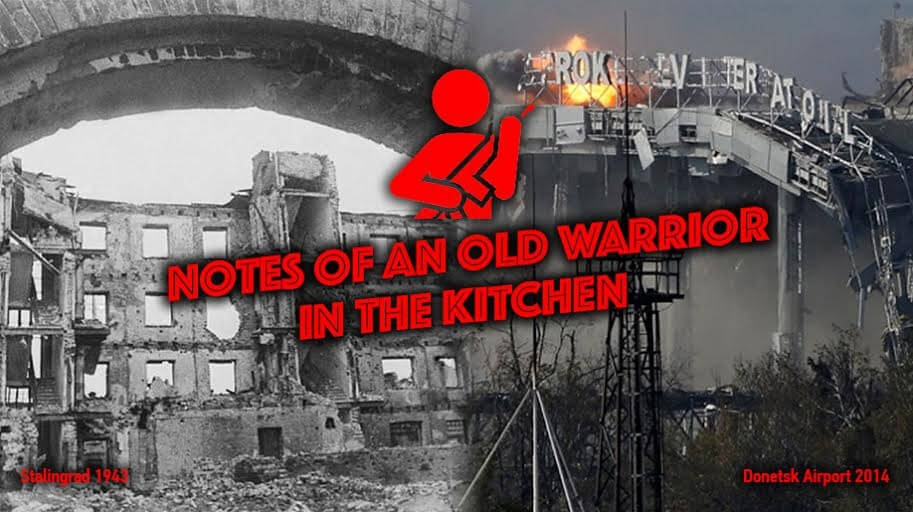 EMPR introduces a new series “Notes of an old warrior in the kitchen”, aiming to raise awareness on the real events in eastern Ukraine. The first article is prepared exclusively for EMPR readers by our military expert Ukrop Bobrowski (a military man, an officer, who served in various regions of USSR for more than 20 years and has experience in several armed conflicts).

When events around the Donetsk Internation Airport started, the desire to gain control over the object by the DNR terrorist organization militants (Russia’s forces in fact) meant for them to obtain such benefits:

a) to set up all attributes of a full-fledged “independent” country – air gate of the newly created country to communicate with the outside world (in principle it would be controversial in terms of sanctions, but the logic of Russia is they will “talk” a little and will cancel the sanctions), or at least temporarily with Moscow;

b) to introduce such a new type of transportation as aviation. Air defense of Ukraine can shoot down any air assets over the Donetsk Airport, but it would be a reason to blow the whole world about another round of bloody “kiev junta” actions. This turn of events is not enough that it would be desirable for the Russian propaganda, so they could make such provocation on their own and make a provocation than not a reason to protect the Russian-speaking population by expansion of territory and occupy new regions;

c) to build up large military base (read: another bridgehead) in Ukraine.

d) full control over the Donetsk Airport would give almost uncontrolled opportunity to throw in this region all that is necessary for “fraternal” DNR republic (air bridge DNR-Russia).

I am confident that the former Ukrainian leadership knew about these plans, moreover they were preparing for something like this and, were instructed by Russia to throw enormous “crazy” budget funds for EURO-2012 airport modernization. Today airstrips of the airport can take all kinds of aircraft, up to the “Buran” systems. Apparently former Ukrainian President was trying to create a “comfortable” conditions for the “future owner”. Ukrainian armed forces adjusted little glances at the Donetsk Airport, or rather supplemented.

Now, control over the Donetsk airport acquires an aura of something high for both Ukrainian and Russian sides. Airport has gone from just aerodrome (base) to a symbol.

For the DNR terrorist organization, airport has gone from just an aerodrome (base) to a symbol of invincible desire to prove “who is who” in their illegal new republic (i.e., Russia). Moreover, it turns out that Donetsk for all terrorists looks as the capital of their illegal “Novorossia”, however DNR couldn’t fully control its own “assests”. Furthermore, millitants attempt to justify their failures by spreading fairy tales about the international conspiracy (private military army, professional Ukrainian mercenaries, NATO troops and etc) fighting against illegal DNR terrorist organization as the one reason why they could not take Donetsk Airport under their control. In the terrorists’s minds seizure of the Donetsk Airport is associated with the victory over all enemies: over “fascism”, over “junta”, over “Banderas” and it must be the triumph of the RUSSIAN WORLD.

Russia also found benefits from the situation in the Donetsk Airport, without postponing the main goal, they have been applied to these events. Russia is pursuing a run-units of different types of troops, their teamwork trained and in combat conditions. According to some reports, all kinds of specialists of Russian troops from FSB to the internal security forces pass through the airport, as the saying goes, army is then army then it fights.

Another, more strategic than just storming of the Donetsk Airport, but the winning aspect for the Kremlin is as follows: large number of young people in Russia having a certain combat experience are unemployed. They also need to feed their families and participation in the conflict in eastern Ukraine gives them an opportunity to earn money. But the situation in Russia is not as beautiful as the Kremlin draws and discontent of the masses, albeit very slowly, especially in the conditions of a police state, but increases. And the “wisdom” of the Kremlin is in leting such “swelling bubble” to blow off its steam. What outcomes the Kremlin will get at the end? On the one hand, “the use” for a potential internal terrorists outside the territory of Russia is found, on the other hand – their number is reduced. Speaking roughly, much easier to bury secretly “load 200” once, than to liquidate other gangs in future. That’s why the Donetsk Airport is used by Russia as so called “grinding grinder”.

The last, but not the least is that Russia imports elite armed units from Chechnya to the area of Donetsk Airport gladly. In fact, this act is more than clear: if financing flow will be decreased or suspended (which is a very realistic scenario due to the current Russia’s economic state), weapons would be turned against the Kremlin, that already happened several times in recent history. Therefore, much better is to remove the threat in advance and the bloody events at the Donetsk Airport fit the best. Famous phrase from the movie “Deja Vu” sais: “When it comes to family honor, the conversation about human lives is out of place.”

As for the Ukrainian side, the struggle for the Donetsk Airport is no longer a military, but spiritual aspect.

Modern weaponry does not raise a question: keep control or not over the airport. Now it’s rather kind of “symbol” (as in previous time – Brest Fortress or Stalingrad).

Furthermore, the Donetsk Airport is a territory of the city of Donetsk, the heart of illegal terroristic “Novorossia”, and the presence of the Ukrainian troops in the airport is also an indication that terorists are not hosts there.

Donetsk Airport remains a symbol of unwavering fortitude for Ukraine, despite the fact it is almost demolished, and a very important factor of patriotic propaganda – a symbol of the spirit for the ages.