Home » Putin has decided to battle the United States

Putin has decided to battle the United States 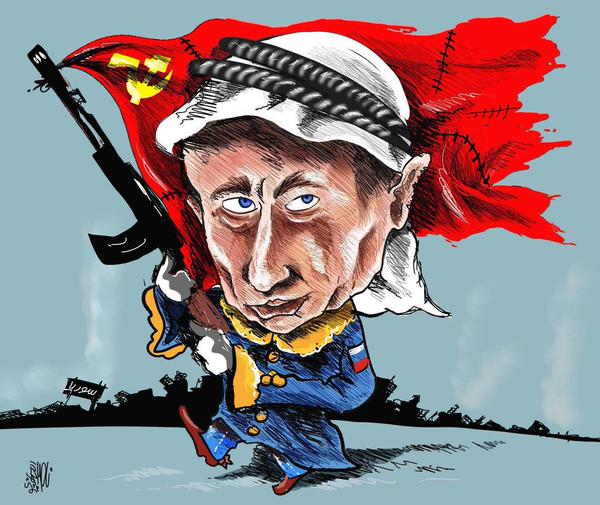 Nobody can forbid Putin from delivering a speech at the United Nations, just like almost 55 years ago, on October 12, 1960, nobody could prohibit Khrushchev from taking the podium and banging his shoe; or Castro from speaking for 4 1/2 hours on September 26, 1960; or Gaddafi, who in 2009 spoke for an hour and a half instead of the allotted 15 minutes.

On September 28th, 2015 Putin will speak at the United Nations, and who knows, he might bang his shoe, too, or he might pull something else. The problem is that nobody believes Putin any more. Nobody believes that Putin is good or honest. So that any positive statement that Putin might make in the speech, if something like that were possible, will be rejected as disinformation, lies, or strategic deception.

The aggressor is always the loudest, the most frequently heard, and the most convincing. When Hitler started World War II in his speeches he focused on his desire to preserve peace; he referred to England and France as warmongers. The Soviets always said that they were “fighting for peace” as they annihilated millions of people and were the major threat to peace on the planet. How can we believe “peace-loving” Putin, who unleashed the Second Chechen War, who invaded Georgia and Ukraine?

Putin is a career KGB operative. The fact that nowadays the KGB has a new name means nothing. He is good at identifying the weaknesses in an opponent’s policies; he is skilled at putting the KGB networks to work at fomenting discord in and among groups, the society at large and even nations. He brazenly and openly recruits leaders of foreign nations such as former German Chancellor Schroeder and former Italian Prime Minister Berlusconi (who recently traveled to Crimea). Why should we be surprised that Syria, so obviously a weak spot in the policies of the United States, has become an object of interest for Putin?

Syria is Putin’s only foreign policy plan that looks like a winning policy. Of course the plan, Putin’s trump card, will be utilized in his game with the West. By selling weapons to Syria, the Russian defense ministry will receive money; by sending troops to help Assad, be it 100 or 100 thousand, Putin is blatantly entering into battle, be it a large one or a small one, with the United States. If Assad prevails, Putin will state that Russia’s aid was crucial for Assad to prevail. If Assad is toppled, Putin will claim that Assad was forced to step down because the enemy forces were superior. Insofar as in Syria no conditions for a “bright future” exist, Putin will blame the United States for all the misfortunes and will claim that Russia was not provided the chance to implement its own plan for the settlement of the Syrian conflict. The impact in image management for Putin will be great: he will emerge as a winner no matter what happens. Nobody has a solution for the difficult situation in Syria.

The situation in Syria provides neither Putin nor Obama with opportunities for political bargaining. The policy of the United States in regard to Syria has been determined: Assad must step down. Whether that will happen or not is an open question. Will the United States change its policy vis à vis Syria? Perhaps. With respect to ISIS the goal of the United States and Assad is the same, and in that sense, it coincides with Putin’s, as well. The difference lies in Obama’s insistence (at least at present) that the Assad regime must be overthrown in the fight against ISIS while Putin maintains that in the fight against ISIS Assad must be saved. All three leaders, Obama, Putin, and Assad are convinced that the truth is on their side and that their aspirations are absolutely sincere.

Iran is Assad’s ally in the war. At the same time, Iran has turned out to be Putin’s other ally against the United States. Most likely, the Iran issue will be brought up by Putin at the United Nations on September 28. As it is with Syria, Russia is selling arms to Iran, as well. Putin is employing the old Soviet strategy of supporting the regimes that are hostile to the United States. Russia’s Iran policy cannot be changed just as the United States cannot change its policy toward Iran. The nuclear arms agreement that has been signed by the US and Iran will be valid at least until January 20, 2017, at which time it will either be broken of upheld by a new president in the United States. Thus there is no space for negotiations between Russia and the United States in regard to either Syria or Iran. Neither Russia nor the United States will abandon their plans, unless Assad will be deposed before January 20, 2017, or unless the US-Iranian nuclear deal will be broken. In that case a completely new political situation would arise, opening new opportunities for both Putin and Obama. But the chances that that would happen before September 28, 2015 are nil.

In regard to the Ukrainian question, on the other hand, Putin has limitless opportunities for negotiations, though the only negotiations open to Putin are negotiations involving retreat. Actually, Putin started the retreat long ago. But the retreat could be accelerated, slowed down, or stopped. The prerogative in this matter, unfortunately, is in the hands of the Russian officials. In Crimea, Donetsk, Luhansk, and even in Transnistria, South Ossetia and Abkhazia, the Russians have taken control of vital sites for furthering their troop advances. Another important site has been established in the Kaliningrad region. Russia does not have enough forces for such a wide offense, however. The intent is there but the forces are not. That does not mean that the attack will not take place. The fact that the aggressor would be doomed and prejudging the outcome of an offensive are no guarantees for peace as we can see when we look at history. According to the latest UN statistics approximately 8000 people have lost their lives in the Russia-Ukraine war; around a million residents have been forced to leave their homes in eastern Ukraine have relocated to Russia or to central Ukraine. The Russia-Ukraine war is the reality into which Putin has plunged us. Ukraine has not yet reached the point of being able to defend its integrity by military means. Ukraine has defended its independence but not its integrity. Finland went through the same in 1939-1940, and Georgia in 2008. Currently Ukraine has numerous allies but the allies are indecisive in the sense that they would prefer to avoid an open military clash with Russia, just like in the past, a conflict with Hitler was undesired. It is difficult to fault Europe and the United States for their stance. Nobody wants a major war, and in addition, Putin understands that he cannot wage a major war, and he could not win such a war. Unfortunately, however, all of the above does not guarantee that a major war will not break out.

On September 28th Putin will once again present his foreign policy objectives. In general, they are already known. Russia will defend the concept of a “multipolar world” meaning that the Russian Federation has the right to support regimes that are hostile to the United States, such as Syria, Iran and North Korea; at the same time an integral component of the “multipolar world”, according to Putin, is an acceptance that the positions and views of Russia and the United States are to be recognized as equally valid. The United States cannot agree with the latter, inasmuch as Russia is simply a larger version of Saudi Arabia (in terms of the export of raw materials) and a larger version of North Korea (in terms of the presence of nuclear weapons). And just because Putin insists on equality in relations will not change anything. The US will not accept Russia’s demand to be treated as an equal partner since equal abilities to destroy one another (if the US agrees to the concept of mutual destruction in the event of nuclear war) can hardly serve as terms for parity in international relations. Russia existed as an absolute monarchy until 1917; as a communist dictatorship from 1917-1991; as a corrupt democracy from 1991-1999; and since 2000 as a fascistic dictatorship. In all its history, a democracy in Russia lasted all of ten years, and even then Russia managed to unleash the first war against Chechnya. In short, until 1991 and after 1991 Russia has been destroying its own citizens and has been defecating over all its neighbors. Russia has not contributed anything valuable or beneficial or virtuous to the world (with the exception of Andrei Rublev, the Faberge eggs, the Bolshoi Theater, and a long list of intellectuals who were accidental survivors). The USSR entered the Second World War only because it was attacked. It was because of Hitler and against the will of Stalin that the USSR was forced to be a temporary ally of the Western democracies.

Dragging such historical baggage along side, it can take Putin a whole day to speak in front of the General Assembly, insisting that the world accept his concept of a “multipolar world” as an equal and valid one. To listen to Putin and to agree with him is impossible. He should stay home and not waste fuel or time, his and ours. But to a boor like Putin an international event at the highest level is of the utmost importance. And since no self-respecting political leader will sit at the same table with Putin, Putin is coming to the United Nations as an uninvited guest where entry is allowed without knocking and without an invitation. I am confident that at the end of the day at the United Nations, Putin will be left to sit all alone, sad and hungry.