Home Opinion Interviews “They threw our documents on top of the dead bodies, took pictures…” a priest’s story about being held captive in Donbas

“They threw our documents on top of the dead bodies, took pictures…” a priest’s story about being held captive in Donbas 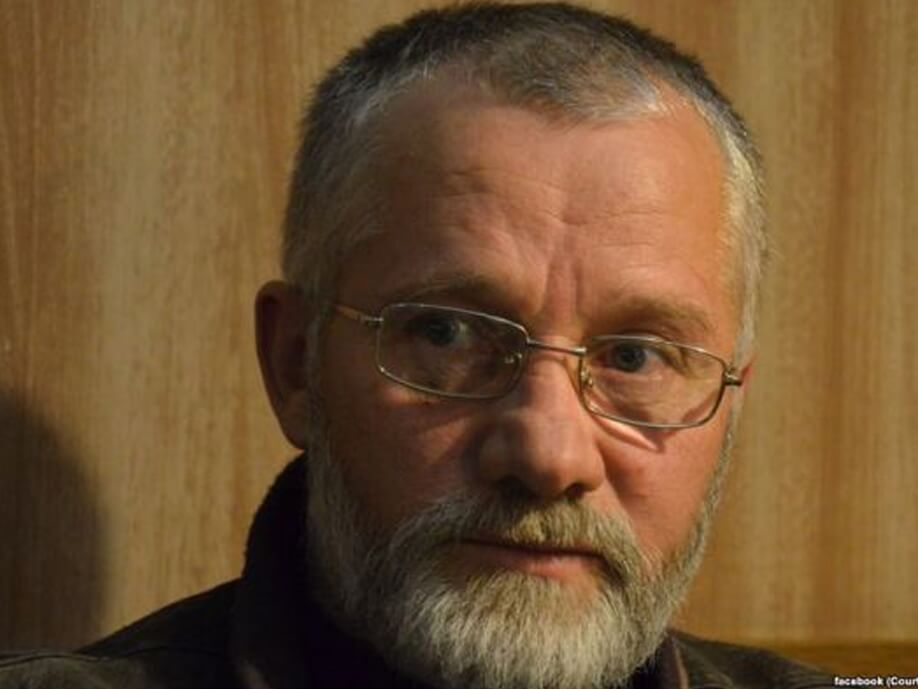 Heartbreaking Interview with a priest from Maidan who was captured by the terrorists in the conflict zone in Eastern Ukraine, who has spent several months in captivity, and survived. Article by Evhen Nasadiuk, Radiosvoboda.

Eleven months after the enforced dispersal of the Maidan on November  30, 2013, about ten people came out onto the central square in Kyiv to demand a government crackdown on those who were responsible for the beatings [that took place on the Maidan]. One of the ten concerned citizens was Valentyn Serovetskyi who had served as a priest on the Maidan.  To the question, why is it taking so long to conduct an investigation into the matter, the priest expressed frustration as he replied that nothing has changed in Ukraine. And he told me that he had only recently come back after having been held captive for two months in the “LNR.” We agreed to meet later in the day to talk about his ordeal in greater detail. Thursday evening all the tables at a pizzeria were taken. Folks were having a beer and talking excitedly. We then walked to a nearby café where except for an elderly couple the café was empty. Russian pop music played loudly. When we asked the volume to be turned down, it was.

“Father Valentyn, let me start with a banal question. How did you become a priest?”

“I was always afraid. The word ‘God’ didn’t interest me at all. That was a wonder I considered to be beyond the scope of a plain man. I worked in business for a while. But I got involved in some pretty dirty business. I began fasting and my heart gave out. As I hung on between life and death I promised the Lord that if I survive I will serve Him. The Lord kept His promise. And I kept mine.”

“Why did you go to the Maidan?”

“The clergy is always supposed to be with the people. But besides that, I am a human being, too, in addition to being a priest. I didn’t want my children to be disappointed in me. And we thought we could change the core of the system in our country. Priests of all confessions were there. Christians, Buddhists, Muslims.” “In all religions life is considered to be a precious gift from God. What were your feelings when you saw people dying on the Maidan?”

“I helped with the burial of each of the men who died and became known as the ‘Heaven’s Hundred.’ In the words of Christ, there is no greater gift than giving your life for another. Christ Himself did. The Maidan demonstrated that nothing is gained without sacrifice and for our country to be independent that sacrifice was required.”

“How did you end up at the front?”

“When things escalated in the east the guys would come back to Kyiv, to the Maidan, and they would tell us that they were being wasted, that they had one weapon for every five guys, that they were being deployed in open spaces as if they were simply being dropped into the most dangerous spots, to be shot. So a group of us, priests and journalists, started going there. We handed out Bibles. You know, it repels a 5.45 and a 7.62. Hold it in front of your heart and no bullet can pierce it.”

“Was it true what the guys had said?”

“Mainly yes. The guys there, they’re very young, they’re unprepared for all that. To die, to collect their friends’ body parts, to kill. Their youth is being stolen, it’s all bewildering. You are doing the worst possible thing, you are taking a life, but you know that if you don’t then your life will be taken. They need to talk to someone, to cry in front of someone, to ask ‘what am I supposed to do?’ And they pose the question everywhere, they ask each other, when sober, when drunk, they ask the bottle, the tree, and the stars. We understand it is important to do that and we understand that they need to hear the words of the Lord.” “How were you captured?”

“At the last checkpoint they forgot to warn us that the following checkpoints were already in the hands of the armed ‘militia.’  And we had passed through three separatists’ checkpoints. At each one we said ‘Glory to Ukraine’ and left copies of a Bible. We didn’t notice the Russian flags or the Georgian ribbons. But at the fourth checkpoint when we got really lost on our way to Slaviansk, those guys got very aggressive. ‘What Ukraine are you talking about, what glory are you talking about?’ We managed to calm them down, though, we took the plates off our car, turned on the siren and continued on our way. We got in touch with our friends and they gave us directions by phone. But we arrived at the next checkpoint at a time when the commander was in charge. Our papers and credentials were closely examined. They could see that I was from Kyiv and the journalist was from Lviv, and that we had a Crimean Tatar volunteer with us and a veteran of the Afghan war from the central region in Ukraine. They took us to ‘general’ Kozitsyn. He said, ‘I know you, you were on the Maidan.’ In my Bible I had photos taken from the stage of the Maidan. In Ukraine photos in the company of Poroshenko and Klytchko are fine, but around there – they beat me for a day and a half. At night they took me to Russia.”

“How did you know you were in Russia?”

“We heard them talking, asking their ‘supers’ if they wanted us, they named names. The Russians paid money for every person they deemed important to keep. But they didn’t want us. We were held for eight days and nights in some abandoned former communist factory. They beat me for blessing people from a different religious sect. At least they gave me water to drink.”

“Did they beat all of you?”

“No, they didn’t beat the woman or the journalist. The journalist agreed to work for them. We were transferred to Luhansk and left in the basement of the county administration building. On the floors above they purportedly wrote laws and down below, in the basement, they broke the laws.”

“Were there many people in the cells?”

“Yes, but most of them were locals. Most were criminals and a few were pro-Ukrainian activists. There wasn’t anyone from any other city. It was easier for them to kill people than to keep them in confinement. Maybe because the journalist agreed to work for them we were spared. They forced me to bury the ones they had killed. Not even at a cemetery, but at a dump. I recited prayers for the repose of the soul as I dug graves under the sound of gunfire.”

“Was anyone searching for you, were any efforts being made to rescue you?”

“You know, this is what shocked me most, that all those who were on the Maidan had switched to working for the elections, or in commerce. With friends like that who needs enemies? The only people who were concerned for us, who wanted to know whether we were even alive were the Muslims who had participated on the Maidan. Shamil, God bless his heart, may God lead him to the Christian faith, learned where we were from his fellow Muslims who own a big business in Luhansk. Our documents were thrown on top of dead bodies; pictures were taken and put on the internet. Three times our families were shown ‘proof’ that we were dead. But somehow our family and our Muslim brothers could sense that we were alive. People I knew who were agents let us know that for some reason the authorities [in Kyiv] weren’t interested in us. And everyone was surprised why after two months we still weren’t being traded [for LNR prisoners]. Later, all of a sudden, I was brought in front of Ihor Plotnytskyi, the chief of the ‘LNR.’ Without any explanations, without giving me back my car, my money and my documents, he said I was free to go. The journalist had been freed earlier and the rest were let go a few days later.”

“How are you feeling?”

“I have broken ribs and Hepatitis C but I don’t have any money even for a regular check-up. I had gotten a loan during the Maidan to be able to feed my family. I was promised a no interest loan. But that didn’t happen, the interest has accumulated. It’s easier for me to go back to the guys at the front than to be a bother to my friends here. It’s so strange, though, several months ago I was talking with Poroshenko, Heletei, Morozov, and now this is where I am.”

“Are you disillusioned with the Maidan?”

“Mothers of the ‘Heavenly Hundred’ came to me and said that had they known how things would turn out, they wouldn’t have let their sons go to the Maidan. And I feel shame for those who called themselves the Maidan and then got bought off. They’re all holed up somewhere in Kyiv, pouring dirt on one another. But you know, for the men and boys who died, it’s even harder to watch from heaven what is happening down here. They can’t change anything, but we still have a chance.”