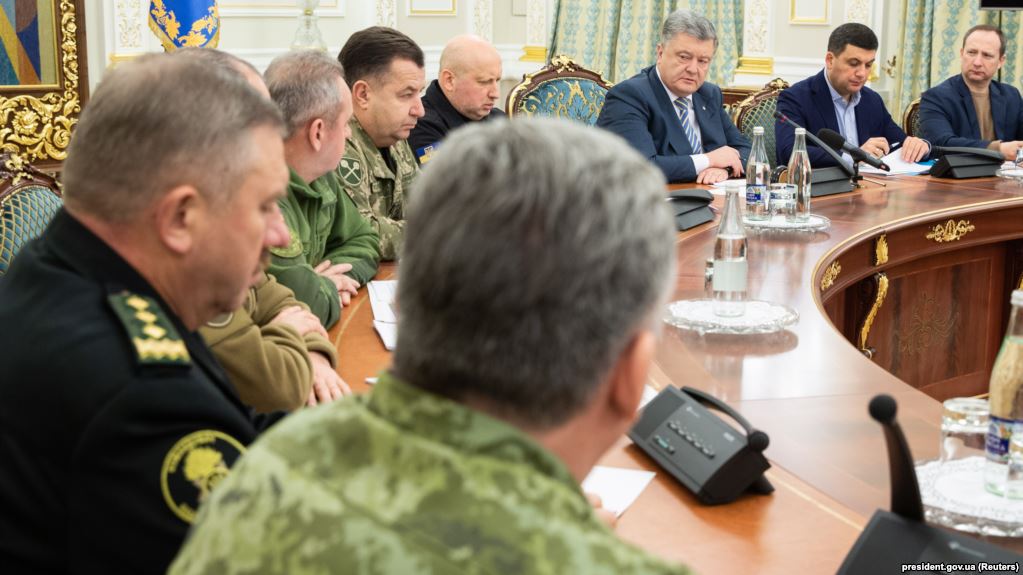 KYIV – Ukrainian lawmakers are to decide whether to introduce martial law after Russian forces fired on Ukrainian ships and seized 23 sailors in the Black Sea off the coast of the Russian-controlled Crimean Peninsula.


With tension between Moscow and Kyiv reaching new heights after the unprecedented incident, in which a Russian vessel also rammed a Ukrainian Navy tugboat, the Verkhovna Rada is to vote on November 26 on a presidential decree that would impose martial law until January 25.

It would be the first time Kyiv has taken such a step since Russia seized Crimea in March 2014, following the downfall of Moscow-friendly Ukrainian President Viktor Yanukovych, and backed separatists fighting Kyiv’s forces in a war that erupted in eastern Ukraine the following month.

Before submitting the decree, President Petro Poroshenko demanded that Russia immediately release the ships and sailors, who he said had been “brutally detained in violation of international law.”

He also urged Moscow to “ensure deescalation of the situation in the Sea of Azov as a first step” and to ease tension more broadly.

But Russia gave no indication it would release the sailors. President Vladimir Putin’s spokesman, Dmitry Peskov, said that the Ukrainian sailors would be held responsible under Russian law for violating the border, but did not specify what that meant.

Western leaders criticized Russia and echoed Kyiv’s call for the release of the Ukrainian servicemen.

The U.S. mission to the Organization for Security and Cooperation in Europe said that the OSCE Permanent Council would meet in Vienna to discuss “Russia’s aggression against Ukraine in the Kerch Strait” — the narrow body of water, now spanned by a bridge from Russia to Crimea, that is the only route for ships traveling between the Black Sea and the Sea of Azov, where Ukraine has several ports including Mariupol.

An emergency meeting of the UN Security Council was called for later in the day, NATO ambassadors were meeting their Ukrainian counterpart in Brussels to discuss the situation, and Poroshenko spoke by phone to German Chancellor Angela Merkel, a key player in Western efforts to end the conflict in eastern Ukraine.

Poroshenko said he supported the imposition of martial law, which could give the government the power to restrict public demonstrations, regulate the media, and postpone a presidential election slated to be held in late March, among other things.

If approved by lawmakers, the measures will include a partial mobilization, a strengthening of Ukraine’s air defenses, and several steps whose broad wording — such as unspecified moves “to strengthen the counterintelligence, counterterrorism and countersabotage regime and information security.”

Three of Poroshenko’s four predecessors as president of Ukraine, which gained independence from Moscow in the 1991 Soviet collapse — Viktor Yushchenko, Leonid Kuchma, and Leonid Kravchuk — warned against approving the martial-law decree as submitted. They said that, if lawmakers want to pass it, they should ensure it is amended to make clear that basic rights and freedoms will be preserved and elections cannot be canceled.

Yuriy Byryukov, an adviser to Poroshenko — who polls indicate faces an uphill battle for reelection — said on Facebook that his administration does not plan to postpone the election or restrict the freedom of speech.

Poroshenko’s decree said that martial law is needed due to the naval incident, which it called “another act of armed aggression,” as well as “other aggressive actions of the Russian Federation in the Azov and Black Seas.”

Meanwhile, Russian Foreign Minister Sergei Lavrov accused Kyiv of violating international norms with “dangerous methods that created threats and risks for the normal movement of ships in the area.”

An emergency meeting of the UN Security Council was called for later in the day, and NATO ambassadors were meeting their Ukrainian counterpart in Brussels to discuss the situation.

In a sharp escalation of tension between the two countries, Russian forces on November 25 fired on two warships, wounding six crew members, before seizing the vessels along with a Ukrainian Navy tugboat.

Kyiv said it had not been in contact with 23 sailors who it said were taken captive.

The three Ukrainian vessels were being held at the Crimean port of Kerch, the Reuters news agency quoted an eyewitness as saying on November 26. The witness said people in naval-style uniforms could be seen around the ships.

The Russian gunfire and seizure of the vessels and crews came on a day of heightened tension after Russia prevented the boats from passing from the Black Sea into the Sea of Azov via the Kerch Strait.

Russia’s Federal Security Service (FSB), which oversees the country’s border-guard service, said its forces fired at the Ukrainian Navy ships to get them to stop after they had illegally entered Russian territorial waters.

“In order to stop the Ukrainian military ships, weapons were used,” the FSB said. It also confirmed that three Ukrainian Navy ships were “boarded and searched.”

But the Ukrainian Navy said its vessels — including two small artillery boats — were attacked by Russian coast-guard ships as they were leaving the Kerch Strait and moving back into the Black Sea.

The Ukrainian Foreign Ministry said Russia’s “aggressive actions” violated international law and should be met with “an international and diplomatic legal response.”

Demonstrators protested outside the Russian Embassy in Kyiv late on November 25.

Earlier on November 25, Kyiv said a Russian coast-guard vessel rammed the Ukrainian Navy tugboat in the same area as three Ukrainian ships approached the Kerch Strait in an attempt to reach the Ukrainian port city of Mariupol on the Sea of Azov.

Ukrainian Interior Minister Arsen Avakov posted a video of the ramming on his Facebook page.

Mariupol is the closest government-controlled port to the parts of Ukraine’s Donetsk and Luhansk regions that are controlled by Russia-backed separatists.

It has been targeted by the anti-Kyiv forces at times during the war that has killed more than 10,300 people since it erupted shortly after Russia seized Crimea.

In a reference to Russia, the Ukrainian Navy said the collision occurred because “the invaders’ dispatcher service refuses to ensure the right to freedom of navigation, guaranteed by international agreements.”

“The ships of the Ukrainian Navy continue to perform tasks in compliance with all norms of international law,” the Navy said in a statement.

After that incident, Russian authorities closed passage by civilian ships through the Kerch Strait on grounds of heightened security concerns.

Russian news agencies quote a local port authority as saying that the strait was reopened for shipping early on November 26.

In Brussels, the European Union late on November 25 called upon Russia “to restore freedom of passage”‘ in the Kerch Strait.

NATO spokeswoman Oana Lungescu said NATO was “closely monitoring developments” and was “in contact with the Ukrainian authorities, adding: “We call for restraint and deescalation.”

“NATO fully supports Ukraine’s sovereignty and its territorial integrity, including its navigational rights in its territorial waters,” Lungescu said. “We call on Russia to ensure unhindered access to Ukrainian ports in the Azov Sea, in accordance with international law.”

The spokeswoman stressed that at a summit in July, NATO “made clear that Russia’s ongoing militarization of Crimea, the Black Sea, and the Azov Sea pose further threats to Ukraine’s independence and undermines the stability of the broader region.”

Russia claimed it did nothing wrong. The FSB accused the Ukrainian Navy ships of illegally entering its territorial waters and deliberately provoking a conflict.

The Sea of Azov, the Kerch Strait, and the Black Sea waters off Crimea have been areas of heightened tension since March 2014,when Russia seized Crimea from Ukraine and began supporting pro-Russia separatists in the Donetsk and Luhansk regions.

A 2003 treaty between Russia and Ukraine designates the Kerch Strait and Sea of Azov as shared territorial waters.

But Moscow has been asserting greater control since its takeover of Crimea — particularly since May, when it opened a bridge linking the peninsula to Russian territory on the eastern side of the Kerch Strait.

Both sides have recently increased their military presence in the region, with Kyiv accusing Moscow of harassing ships heading toward Ukrainian ports in the Sea of Azov, such as Mariupol and Berdyansk.

Sea Of Troubles: Azov Emerging As ‘Tinderbox’ In Russia-Ukraine Conflict

The Ukrainian Navy said it was a Russian border-guard ship, the Don, that “rammed into our tugboat.” It said the collision caused damage to the tugboat’s engine, outer hull, and guardrail.

Russia’s ships “carried out openly aggressive actions against Ukrainian naval ships,” the statement said, adding that the Ukrainian ships were continuing on their way “despite Russia’s counteraction.”

But the Kyiv-based UNIAN news agency reported later that the two small-sized armored artillery boats and the tugboat did not manage to enter the Sea of Azov.

Ukrainian Navy spokesman Oleh Chalyk told Ukraine’s Kanal 5 TV that the tugboat “established contact with a coast-guard outpost” operated by the FSB Border Service and “communicated its intention to sail through the Kerch Strait.”

“The information was received [by Russian authorities] but no response was given,” Chalylk said.

The FSB, however, said the Ukrainian ships “illegally entered a temporarily closed area of Russian territorial waters” without authorization. In a statement, it did not mention the ramming of the Ukrainian tugboat.