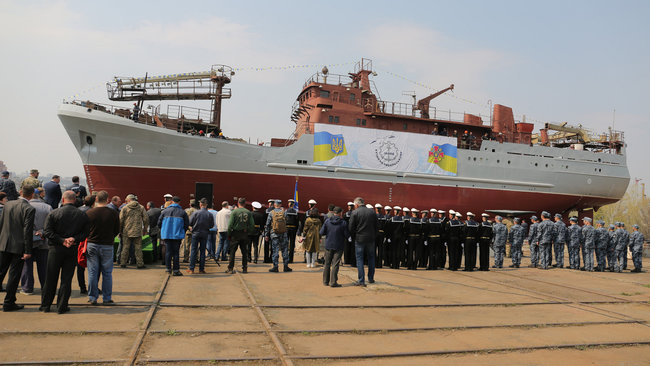 Ceremonial ship launching was held at the Forge on Rybalskyi shipbuilding enterprise in Kyiv.

The first medium reconnaissance ship was built for the needs of the Naval Forces of the Armed Forces of Ukraine by order of the defense establishment.

“Over the entire history of Ukraine, there have not been many cases of launching powerful armored boats, amphibious boats, and today – a medium reconnaissance ship, which is unparalleled in Ukraine regarding its arming and the ability to perform tasks,” said Defense Minister Stepan Poltorak.
According to the Ukrainian Military Portal, the ship launched on Tuesday was built on the basis of Project 502 EM vessel. It has a length of 54.8 m, displacement of 1,220 tons, the capacity to pass 7, 200 miles and develop a speed of up to 11.6 knots. Crew – 29 people.
“The technical specifications of the new ship and the equipment installed on it are currently not known,” the media says.
The Forge on Rybalsky website specifies that Project 502 EM is an average fishing freezer trawler designed to fish with bottom and pelagic trawls, process fish into frozen products, store it in freezer holds and deliver to transport vessels in the fishing area, or transport it to onshore facilities. At present, five Project 502EM ship hulls of different readiness states are on the plant’s slipways.

By the way, here is its colleague, sold for scrap in Sevastopol in 2012.

Irakli Dzhanashiya, national security and defense expert at the Ukrainian Institute of the Future, fears that the new ship is another corruption scheme of state officials. He believes that the main function of a reconnaissance ship is to detect and pursue submarines. The expert doubts whether a trawler with maximum speed 11.6 knots (21 km / h) can keep up with a submarine, whose speed reaches 20 knots (37 km / h).
18 knots per hour are the minimum requirements for reconnaissance ships, and preferably – 24 knots and more, the expert says.
Based on this, we can conclude that again they palmed off some junk on us on our own nickel. And they are going to maintain it at our expense, and inform us happily of another “victory”.
This technological wonder cost us some $ 60-80 million, taking into account the installed equipment. Purchasing and equipping 5-6 “Islands” would cost half of this amount.
If this is “victory and breakthrough” they tell us about, then it is scary to imagine what “failure” means to the Ukrainian leadership, Irakli sums up.
We will remind you that the ship launching is a continuation of the development of shipbuilding as part of the State Target Defense Program for the Weapons and Military Equipment Development for the period until 2020 for the needs of the Ukrainian Navy to strengthen the maritime borders of Ukraine.

We will remind you that on November 15, 2018, the corporate investment funds Prime Assets Capital and VIC, whose shareholders are Petro Poroshenko and MP Igor Kononenko respectively, reported signing a package of documents on the sale of the Forge on Rybalskyi with a new owner, Еwins Ltd from the TAC group, the ultimate beneficiary of which is the former associate of the runaway President Viktor Yanukovych oligarch Sergey Tigipko.