Home » Restoration of looted grain flow from the occupied Crimea

Restoration of looted grain flow from the occupied Crimea 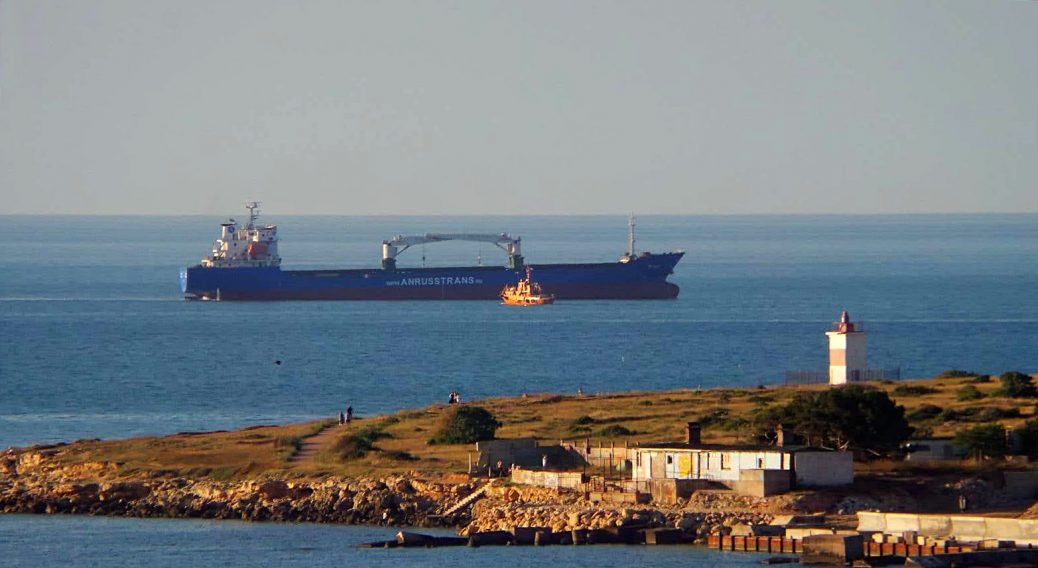 The transportation of grain from the occupied Crimea slowed down after the detention of ZHIBEK ZHOLY (IMO: 9598880) in Turkey.

The ships Fedor, Matros Koshka, St. Konstantin, and Matros Pozynych have loaded in occupied Sevastopol and have been standing idle off the coast of Crimea. Sormovsky-48 and Nadezhda loaded in occupied Kerch. Starting from July 6, all ships with looted grain started their movement.

The volume of stolen grain: in June, 183,000 tonnes of grain were taken from the grain terminal in occupied Sevastopol

Monitoring of the Matros Koshka track on the Маrine Тraffic shows that after entering the Black Sea on June 12, 2022, the ship turned off AIS. A photo from occupied Sevastopol proves that with the transponder turned off, the ship headed for the entrance to the Sevastopol Bay.

The Matros Koshka ship was waiting for loading until June 24, and was at anchor near the port of Sevastopol from June 28 to July 6. The ship was loaded with a consignment of wheat of about 27 thousand tonnes. The ship indicates the port of destination as Beirut (Lebanon), but according to our data it should deliver grain to Syria.

The Fedor ship unloaded in the Turkish port of Bandirma, passed the Bosporus on June 21,2022, turned off AIS on June 22, 2022 and arrived at the entrance to the Sevastopol Bay. About 9,000 tonnes of corn were loaded at the Avlita grain terminal on June 29-July 1, 2022.

The St.Kоnstantin ship left Bandirma on June 16, passed the Bosphorus on June 17, and turned off the ship’s transponder in the Black Sea on June 18, 2022. The ship loaded at Avlita on June 28 – July 1. A signal has just appeared in AIS indicating the destination port of Izmir.

The Маtros Pozynich ship left the Sevastopol Bay on July 4, 2022 after loading 27,000 tonnes of grain and, together with others, stopped at anchor in the port of Sevastopol. The signal in AIS disappeared on June 30, 2022. It has not appeared yet.

The NАDEZHDA ship (IMO: 8611221, MMSI: 273456690, Call Sign: UBXS8, Flag: Russia [RU]) arrived in occupied Kerch directly from the Turkish port of Samsun, loaded about 3,000 tonnes of corn in the fishing port and anchored at the port of Kavkaz; the ship still remains there.

So, the export of Ukrainian grain from the occupied Crimea continues. Some of the ships that started moving towards the Bosphorus almost at the same time are heading for Turkey.