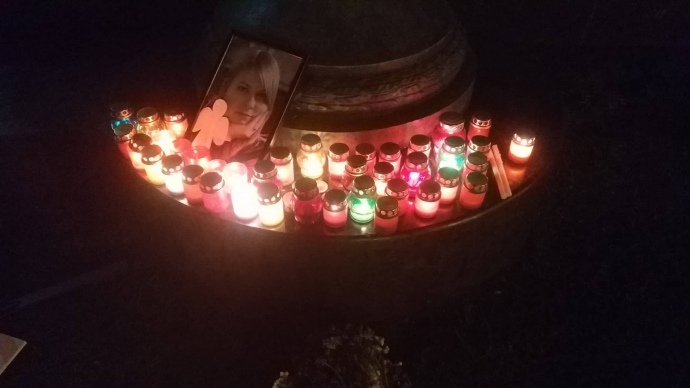 A Year without Ukrainian activist Katya Handzyuk rally was held in Kyiv, near the President’s Office, as well as in 40 other Ukrainian cities.

The participants called on government officials to punish those who had attacked Kherson activist Kateryna Handzyuk.

The day before, activists called on President Volodymyr Zelenskyy to join the rally and light a candle, as well as show political will to punish the paymasters of the murder.

Also on November 1, Viktor Handzyuk invited the president to take part in the rally.

Zelenskyy did not attend.

However, the president wrote on his Facebook page: “A year without Kateryna Handzyuk. All the paymasters will be found and punished. I promise.”

On July 31, 2018, activist Kateryna Handzyuk was attacked with concentrated sulfuric acid in Kherson. About 40% of her skin had burns and her eyes were badly injured. As of September 21, Handzyuk underwent 11 operations.

On November 4, Kateryna Handzyuk died in intensive care in Kyiv.

While still alive, in a hospital, Handzyuk recorded a video message to the Ukrainian authorities and ordinary Ukrainians.

On August 5, 2019, the sentence to 5 people for committing an attack on a Kherson activist entered into force.

Recently, the SBU reported that the investigation of Handzyuk’s murder is conducted in the framework of five criminal proceedings under the procedural direction of the Prosecutor General.