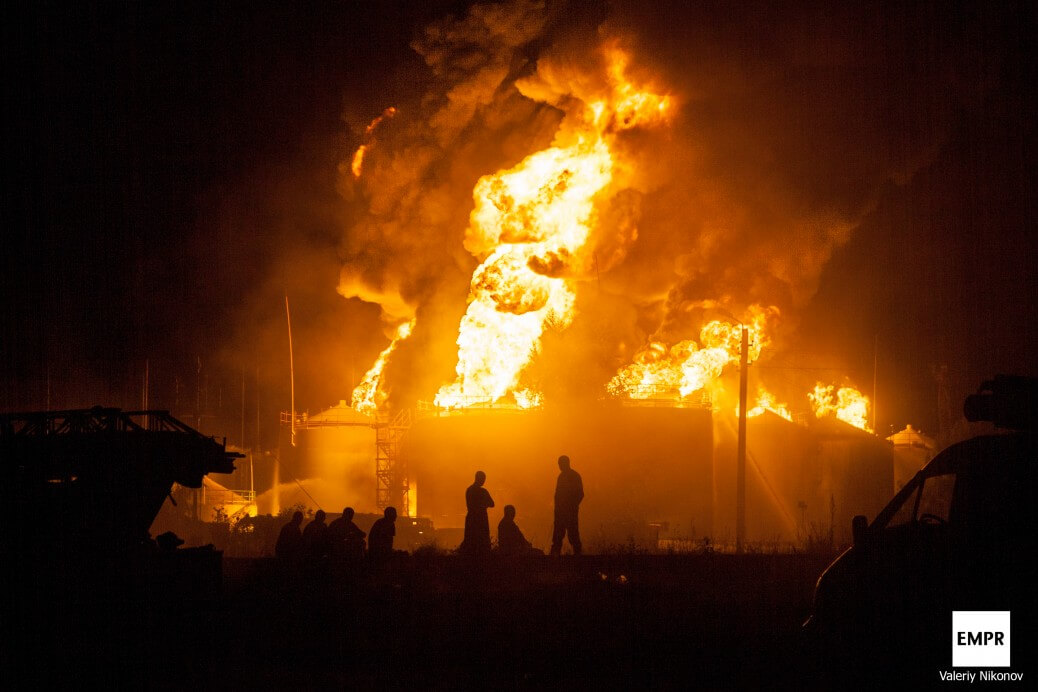 Last night in the village of Kriachko near the Kyiv suburb of Vasylkiv a fire had started at an oil depot. We offer an exclusive report filed by an EMPR special correspondent with live updates.

By 01:00 a.m. the fire has not been extinguished. All attempts to put out the flames have not succeeded. 4 of the 9 tanks continue to burn. Rescue workers from the Ministry of Emergency Situations (MES) have reported that as of this moment the oil is burning outside the tanks, but if a flame enters the tanks a powerful explosion will be triggered. The methods being used to put out the blaze are ineffective. Neither water nor the special foam are working given the magnitude of the fire. The only effective way to fight the blaze is to extinguish it from the air. Every emergency rescue workers here knows this, but six hours after the fire started the managers responsible for giving orders and implementing security measures have not give such order.

Liquefied gas is stored close by the storage tanks. If the temperature around the depot rises to critical and taking into account that the flames are not being extinguished another explosion is likely and a humanitarian catastrophe would be assured.

To make matters worse 50 m from the oil tanks is an air base and an ammunition warehouse. This is one of the reasons why it has not been reported to the public. Some of the ammunition has been removed, but most hasn’t. The chance that the warehouse will explode is greater than ever.

Most important is that the public has not been informed, security measures are not being implemented, evacuation has not begun. Homes located 200 m from the depot are already engulfed in flames.

Update as of 09:00. New methods were not used to put out the blaze. As was expected, all oil tanks blasted this morning. More than 10 dead among rescue workers, many wounded. Rescue staff were forces to leave the spot, but fire is on.

Public has not been informed so far, evacuation has not begun by the MES & authority. Citizens start evacuation by there own. No one was informed about threat (!).

Update as of 10:00 MES helicopter finnaly were seen over the sky, but with monitoring mission only (!).

Update as of 11:00 Number of casualties among recue workers is very high, but no one counts now as the goal is to stop the fire. Connection with Zhutomyr rescue team, that was close to the blast spot is totally lost.

Evacuation of civilians is not anounced officially, but citizens are reccomended by local police to leave the place.

There is a threat of fire / blast at another depot for oil products as well as at the air base and an ammunition warehouse nearby to current fire zone.

MES helicopters just fly over the spot with monitoring mission with no effort to put out the blaze. An expert says that Ukraine has no specific foam to stop such fire. Those one, which was used is uneffective. Fire is still on… 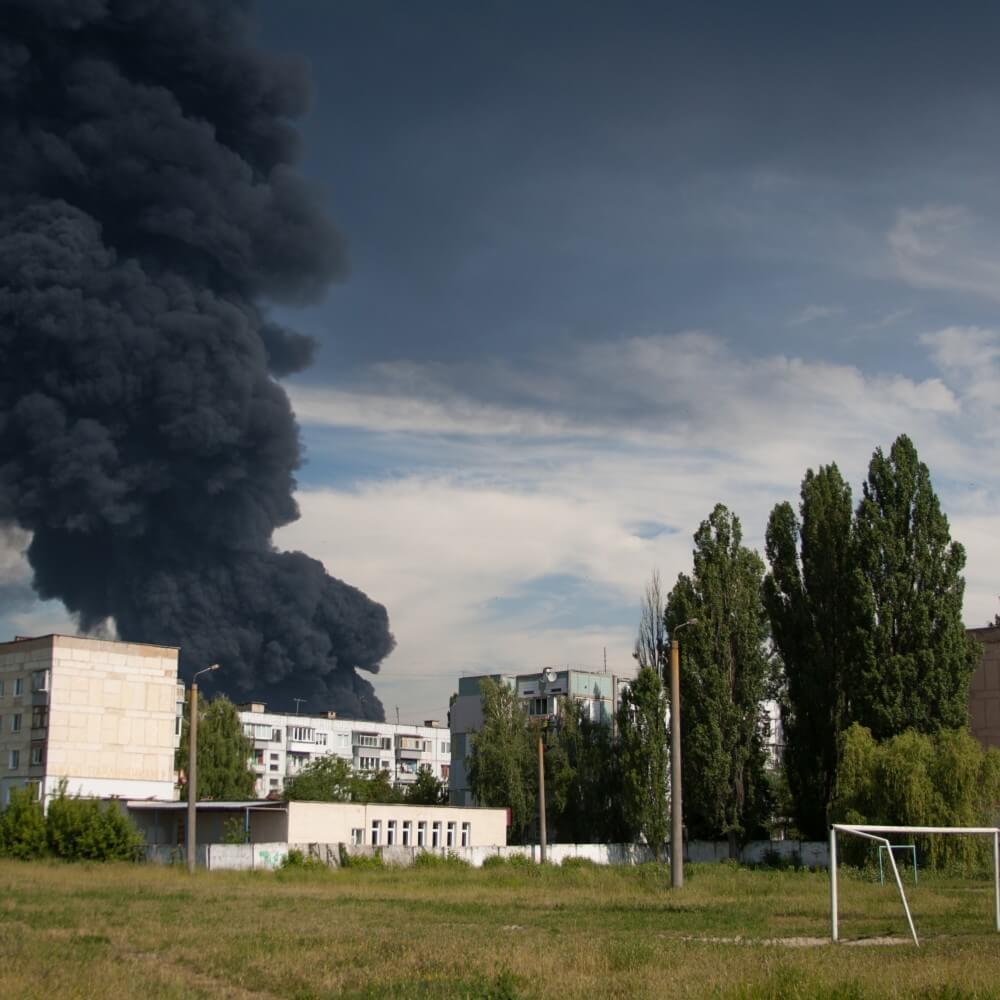 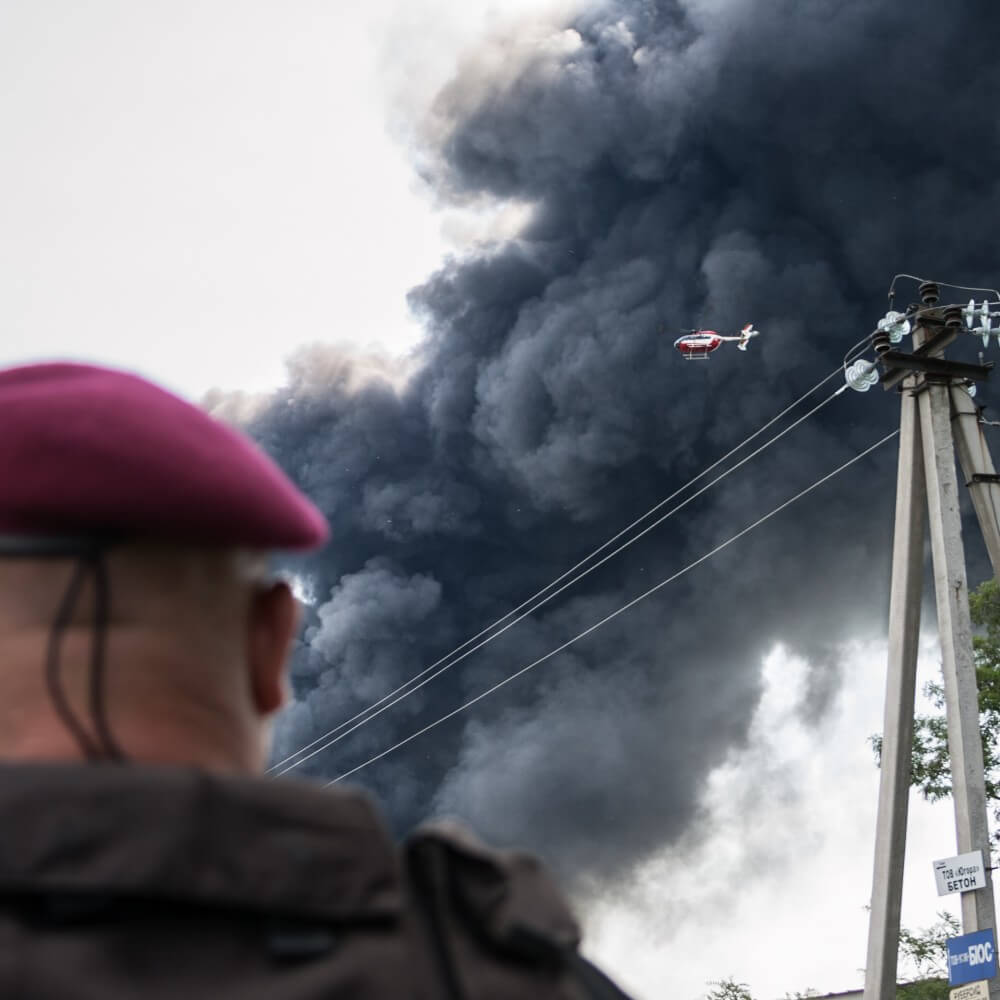 According to the State Emergency Service fire at the oil depot outside Kyiv started at 17:29 (Kyiv time) on 8 June. Oil depot of “Pobutrembudmaterialy” LLC is located between Glevakha town and Kryachky village approximately 40 km South-West of Kyiv. Update as of 15:00 State Emergency Service claims to have started evacuation of civilians from the 2 km zone from the fire line. Evacuation from the 10 km zone is foreseen as the next step. However no signs of centralized evacuation were noticed on the ground. Some locals are evacuating on their own.

BRSM-Nafta company that exploits the oil depot in question issued a statement naming arson (terrorist act) as the main cause of fire.