March of Patriots gathers over ten thousand people in Kyiv 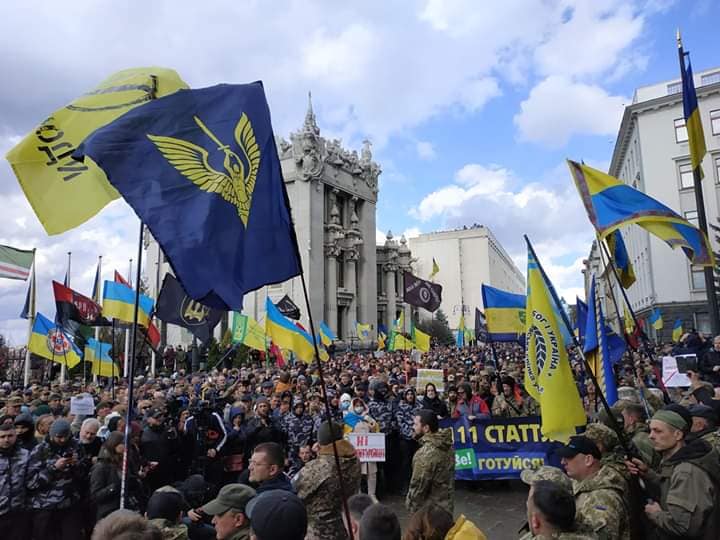 They went to the government quarter, chanting “Glory to Ukraine! No to capitulation! Heroes do not die! The parliament must be put in quarantine!” When the head of the column passed the Cabinet, its tail was still coming out of Mykhailivska Square.

Finally, people reached the President’s Office. They held a rally and announced their urgent demands to the President:

1. Not a step back! No withdrawing troops!

2. Priority development of the defense sector and modern weapons for the Ukrainian army!

3. Stop the capitulation policy! No agreements with the enemy at the expense of Ukraine’s interests!

5. Russia must pay for the destruction of Donbas and Crimea!

6. No election in NGCA before restoring full control of the Ukrainian government over the occupied areas!

8. Respect and social guarantees to the Ukrainian warrior!

9. Stop revenge! Kremlin collaborators and propagandists must be in prisons!

10. Immediate resignation of Andriy Yermak, Head of the Presidential Office!

The march also urged MPs to immediately “close the Rada” for quarantine by April 3.

Quarantine is either for everyone or for no one! There is a risk that, under the cover of quarantine, the Verkhovna Rada will meet to vote on both capitulation and the carve-up of land as well as other anti-state and anti-social initiatives.

Unless the Coordination Board makes a decision on quarantine on Monday – we will all go to the Verkhovna Radon Tuesday! – decided the activists.