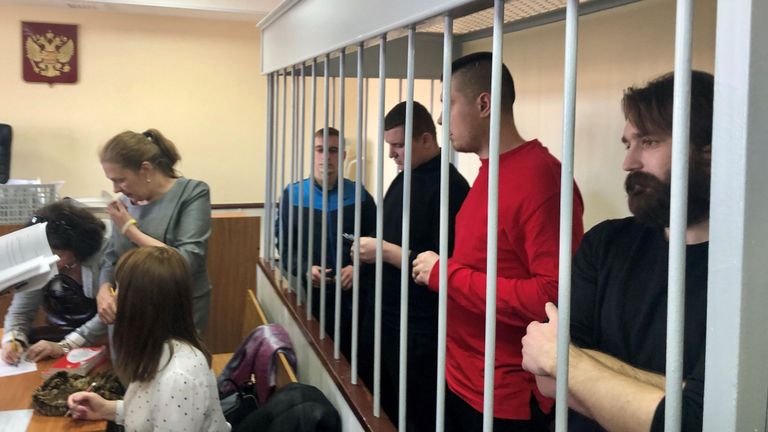 Ukraine’s Parliamentary commissioner for human rights Liudmyla Denisova said agreements were reached to return Ukrainian sailors held captive in the Russian Federation back home. The Omduswoman spoke to Hromadske TV when Ukrainian prisoners – convicted and serving their term in the uncontrolled area of Luhansk region were being transferred to government-controlled area.

“Agreements were reached to return back the sailors. There is an order (issued) by the International Tribunal for the Law of the Sea. Last documents required are being obtained now. I think we will be soon welcoming the sailors back home,” Denisova said.

Meanwhile Russian Ombudswoman Tatiana Moskalkova did not confirm the above statement by her Ukrainian counterpart. She said she is not aware of the decisions concerning Ukrainian sailors allegedly adopted by the Russian authorities.

“Liudmyla Denisova addressed the Federal Security Service through the Foreign Affairs Ministry asking to change the pre-trial detention measure for Ukrainian sailors from arrest to release on bail and suggested herself as a guarantor. I have no information that such decisions were made,” Moskalkova is quoted by TASS.

The lawyer of Ukrainian sailors Nikolai Polozov said he did not know anything about the agreement that would enable their return in the nearest time.

He said the sides are holding negotiations but he is not taking part in them, so he cannot say what their status is.

Polozov also added that the defense is currently studying the documents of the criminal case.

“If some procedural actions are held to prepare the documents we will be in the know, as the sailors will not sign them without the lawyers. For now no one has said anything like that,” the lawyer told Hromadske TV in a comment.

To remind, on July 17 the Lefortovo court in Moscow extended the arrest to all captured sailors for three months – until October 26.

On November 25, 2018 near the Kerch Strait Russian Federal Security Service illegally detained two Ukrainian motor boats “Berdyansk” and “Nikopol” as well as the tow boat “Yany Kapu” headed to the port of Mariupol.

Russia charged them with “illegal crossing of the state border”, Ukraine and the international community consider them prisoners of war.

The International Tribunal for the Law of the Sea considered Ukraine’s lawsuit against Russia and ruled to release all 24 Ukrainian sailors.

The Kremlin ignored the order issued by the International Tribunal for the Law of the Sea.