Home » It is a tragedy. Why does the World continue to negotiate with Putin?

It is a tragedy. Why does the World continue to negotiate with Putin? 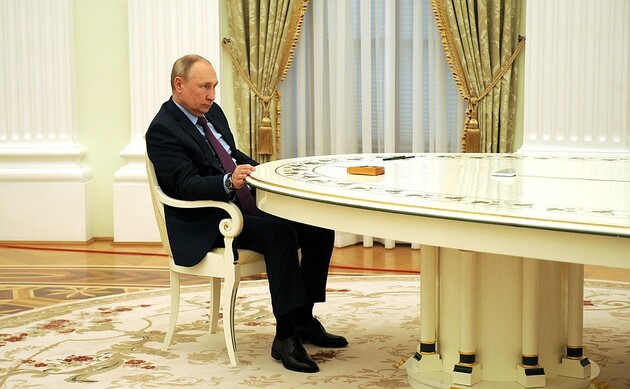 Ukraine’s negotiations with Russia and President Putin have been at a dead end since the beginning because they are indeed absurd. It is impossible to negotiate with the aggressor country on guarantees from it. The same refers to the World.

Negotiations can only take place between the coalition of democratic states and Russia. As a result, if not an act of capitulation, then an act of cessation of hostilities, according to which Russia will withdraw all the troops from the occupied territories, including Crimea and Donbas, should be declared.

The humanitarian aspect is an absolutely different issue, and other players need to be involved. Antonio Guterres, the UN Secretary-General, was in Kyiv. This organization has been worthless politically for many years, but it has helped to do something in the humanitarian field; there were representatives of the Red Cross. These are the structures that need to be involved in addressing humanitarian issues. But not the question of territorial integrity, security, etc. These are different things.

As for compromises, I have recently had a discussion with political scientists from a friendly country, and not surprisingly, two participants kept pushing the idea that we should make some concessions, some compromises. I asked a rhetorical question, “Is being in accordance with international law a maximalist position or a normal one?” And the same question, in my opinion, we should ask ourselves. Russia has grossly violated all norms of international law and committed the crime of military aggression and crimes against humanity. So what compromises can we make with such a country?

But the tragedy is that the world continues to negotiate with Putin. If this world had been set up correctly, in that case, for example, on May 8, at a proposed by President Biden meeting of the G7 countries, the Russian leader would have been given an ultimatum. Instead, everyone is just guessing – what Putin will say. Do you understand? We live in a completely distorted world when a dictator tries to dictate his game rules to democracies. And these democracies are sitting and waiting until the next work of this mad dictator appears. That is an absolutely inadequate position for democratic states.

In a standard, well-constructed world order, something completely different must happen. When a dictator appears, the world order puts him in place immediately. That must be done through joint efforts, including the ones that are happening today. However, there is a delay, and these actions are not as radical as they should be since, despite the problems, the dictator continues to feel quite confident blackmailing the rest of the world. That is, the current security system is inadequate because it does not allow punishing the dictator at the very moment he begins to violate the norms of international coexistence.

And I truly believe, that after this war, when Russia is defeated, the world will gradually move to a different security system, which will ensure that anyone encroaching on the peaceful life of another nation will be punished immediately. Otherwise, we will not bring an order.

At the same time, it seems to me (and this is not just my conclusion, unbiased experts say so) that Russia [as it is today] will not be able to stay in the world community because it can be either wild or aggressive or fall apart. It is not about Zelensky’s, Biden’s, Macron’s, or Johnson’s wish, it’s about an objective development. Russia, in its objective development, has approached the point that will determine now or someday the revival of this very aggression, if the West turns a blind eye to everything that has just happened; or the objective process of its disintegration because it is based on the only thing – repression and fear inside the country and aggression outside. This is precisely what is cementing this sub-empire today.

There are a lot of internal contradictions in Russia, and at some point, they will definitely start to come out. After sanctions that have not yet totally destroyed Russia economically but are already causing substantial damage, Russian Federation will not be able to recover to ordinary because even the army is dependent on supplies from the West. That is, the Russian Federation cannot survive on its own. It has been too attached to the West. Therefore, if the latter continues the sanctions, Russia will not be able to recover quickly in the coming years. So, the question is whether the West wants Russia to recover and start again doing what it is doing now in the coming years.

We need to think strategically. And in this context, I think it would be much more profitable for the West instead of this monster, which constantly recovers (including with the help of the West itself, because when Western companies snatch billions and hundreds of billions in profits from Russia, nothing stops them), to have several more or less regular state formations that would not be engaged in the arms race, intimidating the world, but in their own development. In that case, the economic dividends of the West would be much greater than those of present Russia.

If we talk about why the energy ministers did not approve the sixth package of sanctions, which should have been about the oil embargo, then the issue is not so much in oil as in political decision-making. It is high time for both the European Union and NATO to reconsider their rules of existence. Because the democratic principle of consensus used in the decision-making of these organizations is beginning to hamper the normal development of these associations, finding a compromise among 27 or 30 participants with absolutely different approaches to some issues and dependency upon Moscow is becoming increasingly difficult.

The correct opinion was recently expressed again by the Italian Prime Minister Mario Draghi, who said it is necessary to move to qualified voting. That means if most countries with 65% of the EU population vote “yes”, everyone else must abide by it; otherwise, the EU will become the UN, where there will be a lot of talking and no practical solutions. I think this is what should be asked, but at this stage, I still hope there will be some compromise formulas. After all, if Slovakia and Hungary receive Russian oil for the next two years, it will not be deadly because they are not major consumers. If many more powerful countries refuse this oil, it will be more important than allowing two more countries to be hooked on it.

And the fact that the Hungarian ruling elite got sick with great power disease is no longer a secret. Some parallels can be drawn with Russia. If Moscow dreams of Greater Russia from sea to sea, then Budapest speaks of Greater Hungary before the Trianon Treaty of 1920, when it had the territory of Transcarpathia and included large areas of modern Romania and Slovakia. And I do not rule out that Putin could have told Orban directly during the visit just before the Russian invasion of Ukraine that he would attack. So, it could well be that Orban has already begun to make plans as he separates Transcarpathia from Ukraine.

I believe we need to be extra careful thinking of this context.